Under the hysteria-inducing headline “End of the World Is a Bit Closer, Scientists Fear,” New York Times reporter Sewell Chan forwarded lefty propaganda from Bulletin of the Atomic Scientists and their infamous “Doomsday Clock,” meant to be a sobering reminder of potential nuclear Armageddon.

Part of the blame, naturally, is put on Donald Trump for criticizing Obama agreements on climate change and Iran’s nuclear policy. But is this an objective group of concerned scientists or just another left-wing stunt? And why didn’t the paper cover even greater clock moves during the Obama administration?

The Doomsday Clock, a potent symbol of scientific concerns about humanity’s possible annihilation, was advanced by 30 seconds on Thursday, to 2 minutes to midnight, the Bulletin of the Atomic Scientists announced in Washington.

The last time the clock was moved so close to midnight was in 1953, during the Cold War.

“In 2017, world leaders failed to respond effectively to the looming threats of nuclear war and climate change, making the world security situation more dangerous than it was a year ago — and as dangerous as it has been since World War II,” the bulletin’s science and security board, which oversees the clock, said in a statement.

They also found that “in 2017, the United States backed away from its longstanding leadership role in the world, reducing its commitment to seek common ground and undermining the overall effort toward solving pressing global governance challenges.”

The scientists cited, among other destabilizing factors, the harsh rhetoric President Trump has exchanged with North Korea’s leader, Kim Jong-un; Mr. Trump’s disavowal of the Iran deal; the hiring of climate-change deniers at the Environmental Protection Agency; and the administration’s plans to remake and expand the nation’s nuclear arsenal.

Chan offered this indirect bit of bipartisan criticism, while ignoring who was president then:

The clock has been adjusted many times since it debuted in 1947. Since 2010 — years before Mr. Trump’s presidency — the needle has moved ever closer to midnight: 5 minutes in 2012, 3 minutes in 2015, and two and a half minutes last year.

Yet a nytimes.com search indicates the paper ignored the Doomsday Clock during the Obama administration, even though it moved from six minutes to three minutes during those eight years, including ticks down in 2012 and 2015.

Yet two moves during the Trump era that ticked down a total of one minute off the clock were each treated as big news by the paper (here’s the news story from January 2017), with Trump to blame.

[BAS board member Lawrence] Krauss acknowledged that in the “fake news” era, some critics were likely to accuse the scientists of having a political agenda.

Newsbusters’ Aly Nielsen revealed that BAS members Lawrence Krauss and Robert Rosner who authored a piece in the Washington Post, “have repeatedly donated to liberals, including Hillary Clinton’s 2016 presidential campaign.” The partisan hand nudging the minute hand was not mentioned by the Times.

Clay Waters was the director of Times Watch a former project of the Media Research Center .

The word “doomsday” is intended to terrify. So moving the Doomsday Clock forward to just two minutes to midnight gives journalists a chance for a national freakout about the chance of nuclear war.

Only one problem with that. The two academics helping make this news are liberals who have given to the left eight times more than the right. “[T]he failure of President Trump and other world leaders to deal with looming threats of nuclear war and climate change,” two Bulletin of the Atomic Scientists board members announced in The Washington Post.

Bulletin of the Atomic Scientists (BAS) Board of Sponsors chair Lawrence Krauss and BAS Science and Security board chair Robert Rosner co-authored the Jan. 25 Post announcement saying, “We’re as close to Doomsday today as we were during the Cold War.”

Both Krauss and Rosner have repeatedly donated to liberals, including Hillary Clinton’s 2016 presidential campaign. Rosner gave more than $14,000 to Democrat candidates and causes since 2004, but only $1,800 to one Republican candidate. And while OpenSecrets records only show Krauss giving $180 in donations, they all happened between September and November, 2016, mostly to Clinton’s presidential campaign — and represent 19 separate donations.

Together the authors have donated to $14,686 liberal Democrats and just one Republican over the last 14 years.

The Post report disclosed that recent changes to the Doomsday Clock have been made in response to President Donald Trump. “The failure in 2017 to secure a temporary freeze on North Korea’s nuclear development was unsurprising to observers of the downward spiral of nuclear rhetoric between Trump and North Korean leader Kim Jong Un,” the report elaborated. 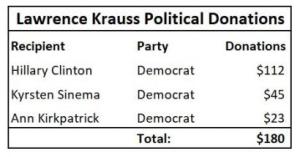 Krauss and Rosner revealed the real purpose for the Doomsday Clock in their conclusion: to act as a tool of activism.

“We hope this resetting of the clock will be interpreted exactly as it is meant: an urgent warning of global danger. The time for world leaders to address looming nuclear danger and the continuing march of climate change is long past,” they urged, “The time for the citizens of the world to demand such action is now.”

It is no surprise that persistently liberal donors would use their platform to push climate change and criticize Trump. BAS similarly moved the doomsday clock nearer midnight following Trump’s inauguration in January 2017.

Even during President Ronald Reagan’s administration, BAS was pushing its liberal agenda. It moved the Doomsday Clock to just three minutes from midnight following Ronald Reagan’s reelection. The clock had been at seven minutes to midnight prior to his election.

Aly Nielsen contributes posts at the NewsBusters site where she is  a staff writer/research analyst for MRC Business.