Although the California Department of Water Resources is claiming Oroville Dam is safer because the water level has fallen by 52 feet, that feat was largely accomplished by over-filing 9 upstream reservoirs that are all expected to flood as another Pineapple Express storm-train brings 48 hours of heavy rain through Wednesday.

The last winter storm caused an evacuation of about 200,000 people downstream from Lake Oroville due to the threat of a catastrophic failure of the dam.

Although most Americans have been told that the fissure in the side of the dam has been stabilized by opening up the spillway to drain the lake, and helicopters have dropped huge bags of rocks in a crack, the water flow into Oroville Lake has been restricted by overfilling the upstream reservoirs.

The nine State Water Project and PG&E earthen reservoirs on the Upper Feather River Watershed that feed directly into Lake Oroville were already at maximum capacity prior to the new storms. This next storm is expected to bring 1-3 inches of rain in the valleys. But the Central Sierras are expecting 10 inches of snow and rain over the next 7 days.

With all the higher elevation reservoirs brimming, Supervisor Kevin Goss from mountainous Plumas County told the Sacramento Bee, “I’m watching, and I’m worried.” Flooding from the last set of storms shut down escape in all directions in his Indian Valley district.

The towns of Greenville and Taylorsville were isolated, and sewer systems for the sparsely populated county suffered extensive damage as many roads washed out. The flooding from the new storm is expected to be much more serious.

In addition,tRelatively warm temperatures of up to 49 degrees in nearby Tahoe caused snowmelt this week. With the “Snow Water Equivalents” for this time of year in the Central Sierras at 183 percent and the Southern Sierras at 205 percent; the National Oceanic and Atmospheric Administration warned that the mountains could see significant runoff.

The total capacity of the upstream dams is about 400,000 acre feet, or about one tenth the capacity of Lake Oroville. Last week, the upstream reservoirs were allowed to fill in an effort to take pressure of Oroville Dam. But with the dams full, virtually 100 percent of the rain and runoff from the coming storms will flow into Oroville Lake.

Despite the upstream restricting of water flow, Lake Oroville added over 1 million acre feet of water in three days during the last storm. Engineers from the California Department of Water Resources hope that a combination of releasing 800,000 acre feet of water from the lake will be enough to prevent another Oroville Dam flood.

GAFFNEY: Whom to Blame for Oroville — and How President Trump Can Fix It 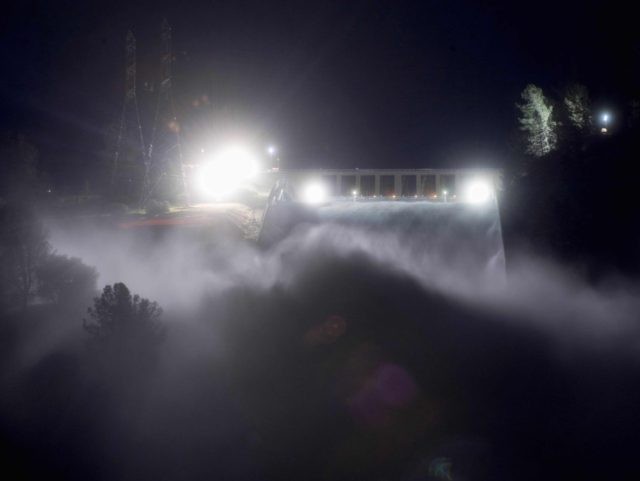 The forecast is for more rain around the Oroville Dam – and potential disaster for hundreds of thousands of Californians living downstream from its poorly designed emergency spillway.

Many bear responsibility for the real prospect of a catastrophic failure of that spillway.  But ultimately, the buck stops with an obscure government agency 3,000 miles away: the Federal Energy Regulatory Commission (FERC).

FERC has known about systemic defects of the Oroville Dam for over a decade. In fact, back in 2005, this dam was supposed to be relicensed for fifty-years. But objections were heard from various citizen groups.  They warned about soil-erosion at the emergency spillway giving rise to the  potential for its catastrophic failure during high water conditions like those now present. Their calls for the spillway to be reinforced with concrete were ignored by the FERC which, instead, began granting annual one-year operating licenses in 2007.

Those licenses have been renewed on the basis of a “Potential Failure Mode Analysis” of the Oroville Dam.  According to an October 14, 2016 letter sent by FERC’s Office of Energy Projects to the California Department of Water Resources, the latest Failure Analysis –  which was submitted to FERC in December 2014 – was “a significant improvement” over its predecessor.  The public is being kept in the dark about this justification for ignoring the actual, high potential for failure of this dam, however, because FERC treats these these Failure Analysis documents as secrets.

Unfortunately, this catastrophe-in-the-making in California is just one example of FERC’s shortcomings. The agency is overwhelmed by its extensive regulatory responsibilities and it is often captured by regulated interests. Consider the following contributing factors:

Bad as the dangers associated with FERC’s failure to assure the safety of the Oroville dam are, these factors have contributed to the agency’s culpability for even more serious malfeasance: the uncorrected vulnerability of the U.S. electric grid to physical, cyber and electromagnetic pulse attack, as well as to the effects of intense solar storms.

Should the grid – our most critical of critical infrastructures – suffer widespread and sustained collapse as a result of one or the other of those very real dangers becoming reality, the consequences would dwarf those associated with massive flooding of areas below the Oroville Dam.

These potential catastrophes underscore a long-neglected reality: The safety and security of the American people requires that the Federal Energy Regulatory Commission have as commissioners individuals who have been, are and will remain genuinely independent from the industries that their agency regulates. This is especially so as the commissioners are, by statute, essentially unaccountable to either the President or Congress.

As it happens, three out of five FERC commissioner slots are currently open. It is imperative that President Trump nominates, and the Senate confirms, only commissioners who will have the requisite technical expertise, independence and vision to use their considerable power to protect the people of this country, and not simply the utilities they regulate.