Image: Pacific islands ‘growing not shrinking’ due to climate change 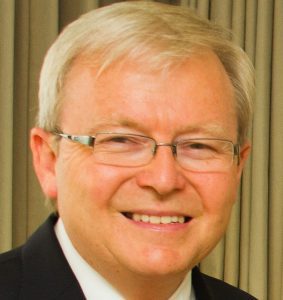 A proposal from Kevin Rudd to address the impacts of climate change on the Pacific has been labelled as “imperial thinking” by Tuvalu’s leader, who lambasted the former prime minister’s suggestion to swap Australian citizenship for maritime resources.

Mr Rudd wrote in a recent essay that Australia should offer citizenship to residents of the small Pacific nations of Tuvalu, Kiribati and Nauru in exchange for control of their seas, Exclusive Economic Zones, and fisheries.

“Under this arrangement, Australia would also become responsible for the relocation over time of the exposed populations of these countries [totalling less than 75,000 people altogether] to Australia where they would enjoy the full rights of Australian citizens,” Mr Rudd wrote.

But the idea — which in essence would see the countries give up their sovereignty — has been strongly criticised by Tuvalu’s Prime Minister Enele Sopoaga, who warned it amounts to a form of neo-colonialism.

“The days of that type of imperial thinking are over,” Mr Sopoaga told the ABC.

“We are a fully independent country, and there is no way I’m going to compromise our rights to fisheries resources, our rights to our immediate resources.”

Mr Rudd’s key proposal is to relocate citizens of Pacific Island nations to Australia once rising sea levels make these nations uninhabitable, pointing out that their populations combined is less than half of Australia’s total annual immigration intake.

What can I say – Kevin Rudd’s impressive diplomatic skills made him WUWT’s pick for UN Secretary General. Sadly Rudd didn’t get the job.

Graham Lloyd has picked up on the story that the Australian BOM have rewritten Australia’s temperature records for the second time in six years, and once again the rate of warming has conveniently increased.

One of the most aspects is that the BOM quietly introduced these changes last October , without announcing them: 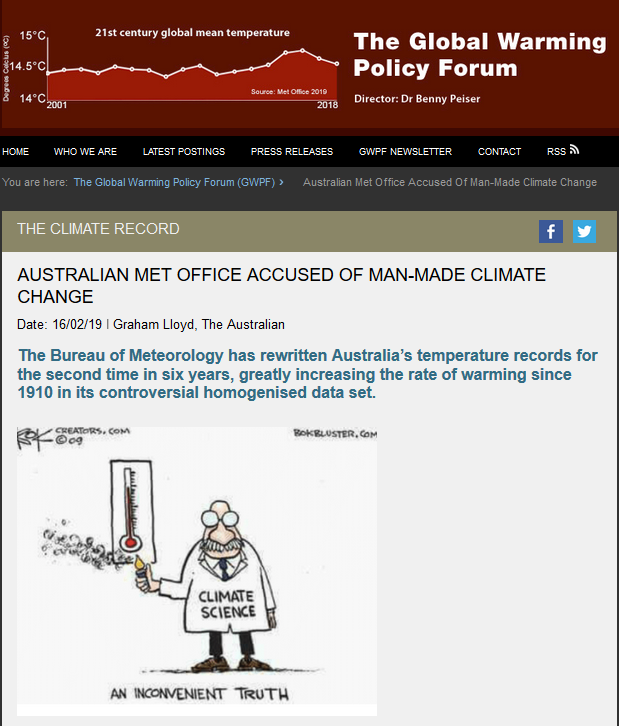 Rather than the nation’s temperature having increased by 1C over the past century, the ­bureau’s updated homogenised data set, known as ACORN-SAT, now shows mean temperatures have risen by 1.23C.

Bureau data shows the rate of mean warming since 1960 has risen to 0.2C a decade, putting the more ambitious IPCC target of limiting future warming to 1.5C close to being broken.

Homogenisation of temperature records is considered necessary to account for changes in instrumentation, changes in site locations and changes in the time at which temperatures were taken. But the bureau’s treatment of historical data has been controversial. In recent years there have been claims that the organisation was treating temperature records in such a way that left it exposed to accusations that ideological pursuits had trumped good scientific practice.

A number of reviews of the ­bureau’s network equipment and its temperature data handling have been carried out. A technical panel found the homogenisation methods used were largely sound.

But a key recommendation, to include confidence levels or error margins in the data, remains ­unfulfilled. A BoM spokesman said work was under way on a number of scientific papers looking at uncertainty and confidence intervals for temperature data ­observations, adjustments and national averages.

“This work will be made available to the public following ­thorough peer review,” the spokesman said.

The bureau had fiercely defended the accuracy of its original ACORN-SAT data. But more ­recent analysis, including the ­removal of rounding errors, has effectively increased the rate of warming by 23 per cent, compared with the earlier homogenised ACORN version-one data.

Detailed technical information on the ACORN-SAT ­update was published late last year, but there has been no public ­announcement of the revised data, which is now considered the official national average temperature record. A bureau review of the ­homogenised data said the new version had “increased ­robustness and greater spatial ­coherence”.

The updating of the ACORN-SAT data coincided with the ­release last October of a new version of US weather agency NOAA’s global land temperature data set.

A bureau spokesman said ACORN-SAT version two was the bureau’s “improved official homogeneous temperature data set”. The new data set benefited from “the numerous scientific and technological advances which have occurred over the past six years, as well as the ­insights and recommendations from an independent ACORN-SAT technical advisory forum”.

“It also contains new data which was not previously available when the bureau developed the first data set,” he said.

The bureau said the updates had been independently peer-­reviewed, and the findings were that the methodology was “rigorous and reliable”.

The bureau said the data in version two was subjected to two rounds of homogenisation, as had been the case with version one. “In total, 22 of the 966 ­adjustments applied in version two of the ACORN-SAT data set arose from this second-round procedure,” the bureau said.

A technical analysis of ACORN-SAT 2 by the bureau said 1910-2016 trends in Australian temperature were about 0.02C a decade higher than those found in version one. It said rounding errors in version one accounted for much of the new trend.

Dr Marohasy said the bureau had not explained how it could have generated a 23 per cent increase in the rate of warming, just through updating the official ACORN-SAT ­record.

The minimum-temperature trend is now an increase of 0.13C a decade, compared with 0.109C in ACORN-SAT 1.

The bureau said improved ­accounting for the widespread relocation of sites out of towns during the 1990s and 2000s, and the incorporation of recent data from new sites, were also substantial contributors.

Dr Marohasy said movement of sites was meant to be part of the adjustments made in the first version of the data.

“The incorporation of data from new sites may account for some of the 23 per cent increase,” Dr Marohasy said, “because the bureau have opened new sites in hotter western NSW, while closing higher-altitude weather stations, including Charlotte Pass in the Snowy Mountains.”