Related: German Review Of Moore Film: “About Selling Out Green Ideas”…Sustainability – In The Cayman Islands” 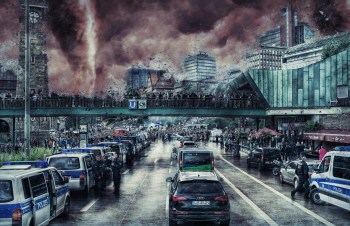 Climate science research and assessments have misused scenarios for more than a decade.

Symptoms of this misuse include the treatment of an unrealistic, extreme scenario as the world’s most likely future in the absence of climate policy and the illogical comparison of climate projections across inconsistent global development trajectories.

Reasons why this misuse arose include:

(a) competing demands for scenarios from users in diverse academic disciplines that ultimately conflated exploratory and policy-relevant pathways,

(b) the evolving role of the Intergovernmental Panel on Climate Change – which effectively extended its mandate from literature assessment to literature coordination,

(d) maintaining research practices that normalize careless use of scenarios in a vacuum of plausibility, and

(e) the inherent complexity and technicality of scenarios in model-based research and in support of [climate] policy.

As a consequence, the climate research community is presently off-track. Attempts to address scenario misuse within the community have thus far not worked.

The result has been the widespread production of myopic or misleading perspectives on future climate change and climate policy.

Until reform is implemented, we can expect the production of such perspectives to continue.

However, because many aspects of climate change discourse are contingent on scenarios, there is considerable momentum that will make such a course correction difficult and contested – even as efforts to improve scenarios have informed research that will be included in the IPCC 6th Assessment.

Everybody the far left see as a threat they will try to crush, marginalize, cancel and/or smear:

Then there’s all their lies, so many lies:

Finally! “North Pole soon to be ice free in summer” – Why did it take so long?