This story concerns a serial murderer who was just 14 years old when he murdered his first victim and who was dubbed a “HERO” by the media. He had already killed 10 people before he reached 20. among whom was his father himself!

He killed him by stabbing him first, then he chewed up and spit out his heart.

When he was eventually imprisoned for that, he continued to torture and murder numerous more.

So how can someone who has killed numerous people become a HERO CELEBRITY? 70, to be precise. Why is our culture so flawed?

He pursued pedophiles, wife beaters, and gang leaders, earning the nicknames “REAL-LIFE PUNISHER,” “THE BRAZILIAN VIGILANTE,” and a host of other honorifics.

He was so adored by the public that even after his release from jail, he gained popularity!

Let me just ask you a question…

SHOULD WE CELEBRATE A PROUD MURDERER – AS LONG AS HE ONLY KILLS DANGEROUS CRIMINALS?

Let me give you the entire tale before you respond.

This is the self-described vigilante PEDRO RODRIGUEZ FILHO. 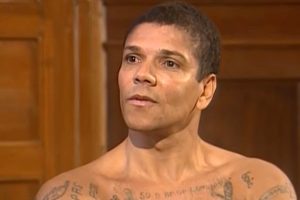 He was raised in a terrible home, as you can probably guess. Pedro was born with a misshapen skull as a result of his mother’s furious beatings while she was pregnant since his father was so aggressive.

Pedro started to solely respond to injustices with “violence.” Pedro, a 14-year-old, killed his father in retaliation when a politician sacked him from his job. When Pedro was 19 years old, he finally had enough. He came to the conclusion that his callous father didn’t require a heart after witnessing him use a machete to kill his own mother. 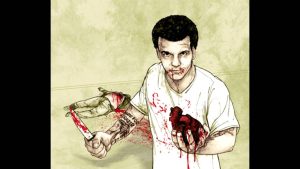 He tore it out of his chest, displayed it, and spit it on his lifeless body. At that precise moment, Pedro rose to the role of self-made hero on a quest to kill criminals.

“I DIDNT HAVE REMORSE ABOUT WHO I KILLED. THEY WERE PEOPLE WHO WEREN’T WORTH A DAMN.”

Many agreed with him and even defended his actions.

“…the fact that Filho killed inmates rather than prison guards indicates the inherent worthiness of his actions.”

Because of this, he instantly rose to fame after being released from prison, with millions of people following his every move. Millions watched when he showed up in an interview and proudly shared his tale!

He acknowledged that the excitement of executing criminals appealed to him. brought to mind fictional figures who acted independently of the law. It was simple for many to feel Pedro’s plight. They thought that because the persons he killed posed a threat to society, his killings were JUSTIFIED.

Pedro, however, primarily killed criminals, but while he was incarcerated, he also killed those who were awaiting trial and may have still been innocent people! Some of whom he killed for no apparent cause, such as a noisy roommate or a new inmate who he simply didn’t like! His murderous rampage turned into an addiction rather than merely a means of obtaining justice.

“.. an unnamed psychologist… said that he killed so frequently, that the act of killing stopped having an emotional impact on him.. It was an addiction…”

But in all of this considering he would only kill dangerous people, the questions still remain the same:

Is Pedro’s addiction to killing criminals WRONG? or do you believe that it made him a HERO?”