Democratic presidential nominee Hillary Clinton delivered a keynote speech at the National Baptist Convention Thursday night, but photos show that many people failed to show up.

Prior to the speech, workers moved in wall partitions in the giant venue, according to tweets from several reporters who were there. 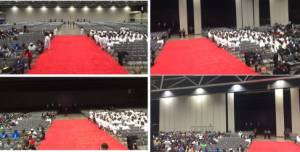 Read the whole story at Breitbart