Poland has had it with Germany and is calling them out for what they’ve done to Europe with their “Refugees Welcome” policies.

The Chairman of Poland’s PIS Party, Jarosław Kaczyński, says it was Germany’s decision to open Europe’s borders, not Poland’s, and his countrymen should not have to pay for their neighbor’s mistakes.

“We have not opened Europe for refugees – M.s Merkel has,” the conservative said.

“And it is Ms. Merkel and Germany that have to bear the consequences, not Poland.”

In late 2015, the European Union forced through measures requiring member states to accept a share of 120,000 migrants in southern Europe – later increased to 160,000 – despite strong opposition from the Czech Republic, Hungary, Romania, and Slovakia.

The Civic Platform Party (PO) government, at the time led by current President of the European Commission Donald Tusk, did not oppose the measures – a stance which led to the party’s landslide defeat in the parliamentary elections weeks later.

Law and Justice repudiated the migrant quotas shortly afterwards in response to the Paris terror attacks.

The party’s Minister for European Affairs said the attacks presaged “the necessity of an even deeper revision of the European policy towards the migrant crisis”, and insisted that Poland would not take any migrants without “security guarantees”.

The EU has threatened Poland with sanctions for its refusal to implement its decision, but interior minister Mariusz Błaszczak has stated that acceding to the bloc’s demands would “certainly be much worse” than any potential punishment.

Błaszczak has articulated a remarkably robust position on the migrant crisis, declaring that “the policy of multiculturalism in Western Europe is reaping a bloody harvest in the form of terrorist attacks”.

Professor Ted Malloch, widely tipped as President Donald Trump’s eventual pick for U.S. ambassador to the EU, has described the clash between Poland and the central organs of the European Union as a logical consequence of the bloc’s “top-down approach to governance, where the smaller is subsumed into or supplanted by the greater”.

In an article for Breitbart London, the professor has characterised the EU approach as “oppressive and ultimately unsustainable”, observing that “Poland knows this and support for a ‘Polexit’ from European Union oppression is on the rise”.

He added the country has made itself “great again … by being Polish”, and urged all European countries “to rise to their natural role as proud leaders by being sovereign entities”.

SWEDEN’S politicians’ open-door refugee policies has seen an increase in anti-immigration sentiment, a study has claimed.

Fears of Swedes losing their culture and identity has fuelled a rise in anti-migrant sentiment, after 163,000 people arrived in the country in last year.

Sweden has been the poster child for openness and toleration for decades but that has changed in just two years, the study by independent British think-tank Demos found.

In September 2015, thousands of people took to the streets with banners saying “Refugees Welcome” while Prime Minister Stefan Löfven spoke about not building walls and offering help “when need is great”.

A year later, in October 2016, his government decided to implement border controls, which had always been available but not used, to stem the rapid flow of asylum seekers. 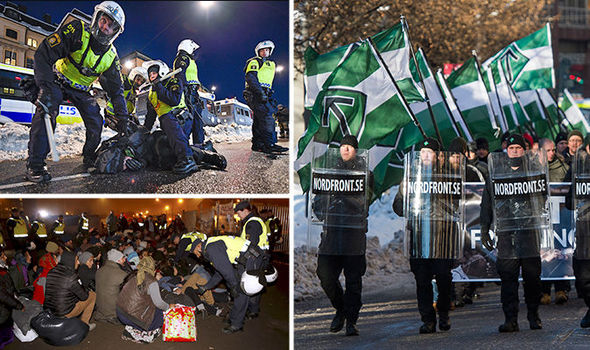 The report said: “This U-turn in refugee policy and rhetoric on refugee admission was accompanied by an increased focus on questions of national identity and civic integration. ‘Swedish values’ became one of the key terms in the immigration debate, in a country where nationalism used to be a political taboo.”

And a surge in nationalistic language has shown many Swedes now consider migrants a threat to the nation, the report said.

The 458-page study into populism in Europe found an increasing use of “exclusionary nationalist rhetoric” in 2015 and 2016 by Swedish politicians across the spectrum.

Since the beginning of 2015, the study found an increasing use of the term “Swedish values” by not just the anti-immigration Sweden Democrats which have gained popularity since then, but by all main parties. 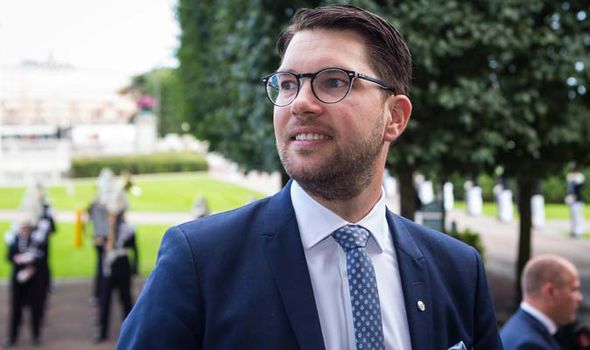 The authors said: “Discussions of national identity became much more prominent from 2015 onwards in relation to the refugee crisis.”

Politicians continually spoke about Swedish national culture and heritage which, while not overtly anti-migrant, led to an exclusion of those who were not native.

The leaders of the liberal-conservative Moderate Party and conservative Christian Democrats were more subtle than Sweden Democrats about linking values and culture with the suggestion immigrants “are causing a demise of Swedish values”, however they did make the link, the study found.

Sweden has traditionally bucked the growing trend of support for populist anti-immigration parties across Europe, with the country welcoming an influx of labour migrants in the Sixties and Seventies.

Support for anti-migrant party the Sweden Democrats has increased since the 2014 election when it was already at an all-time high, the study said.

Politicians from all parties have been recorded making comments questioning the future of national identity or ‘Swedishness’.

Anna Kinberg-Batra, leader of the Moderates, said arranged marriages could not be defended as freedom of religion.

She said: “To take the future away from your daughter – that is not freedom.”

She added that honour killings were “dishonest and it goes against Swedish values”.

Sweden sends sharp signal with plan to expel up to 80,000 asylum seekers

Sweden is to reject up to 80,000 people who applied for asylum in the country last year, as many as half of whom will be forced to leave against their will, according to official estimates.

The interior ministry has called on police and migration authorities to prepare for a sharp increase in deportations, and to arrange charter flights to expel refused asylum seekers to their country of origin. Sweden is also approaching other EU countries, including Germany, to discuss cooperation to increase efficiency and make sure flights are filled to capacity, it said.

On Thursday Finland’s interior minister said Helsinki also intended to expel about 20,000 of the 32,000 asylum seekers it received in 2015. “In principle we speak of about two-thirds, meaning approximately 65 percent of the 32,000 will get a negative decision (to their asylum application),” Paivi Nerg, the ministry’s administrative director, told Agence France-Presse.

Sweden received more than 160,000 asylum applications last year – by far the biggest influx in the EU as a proportion of the population. Between 60,000 and 80,000 of them will be rejected, the interior minister, Anders Ygeman, told Swedish media on Thursday.

The revelation that a large proportion of asylum seekers will be turned down, and as many as half of failed applications will be forcibly ejected, sends another signal to refugees that Sweden is no longer extending the warm welcome it offered to them just a few months ago.

I WAS RIGHT ABOUT SWEDEN