Pope urges President Zelenskyy to be open to any “real peace initiative” and denounces Russia for annexing four regions of Ukraine.

Pope Francis said he is plagued by “rivers of blood and tears” and has made a direct appeal to Russian President Vladimir Putin to halt the “spiral of violence and death” in Ukraine.

At a speech devoted to Ukraine in St. Peter’s Square, the head of the Catholic Church also denounced the annexation of four areas of Ukraine, warned that it could lead to a nuclear conflict, and pleaded with Putin to consider his own citizens.

One Vatican source remarked that the passionate speech was so solemn it was reminiscent of Pope John XXIII’s 1962 radio plea for peace during the Cuban Missile Crisis.

Francis has frequently denounced Russia’s invasion of Ukraine and the deaths it has brought about, but this was the first occasion he addressed Putin directly.

“My appeal goes above all to the president of the Russian Federation, begging him to stop this spiral of violence and death, even out of love for his own people,” Francis said.

Additionally, he urged Ukrainian President Volodymyr Zelenskyy to take into account suggestions to end the fighting.

“On the other side, pained by the enormous suffering of the Ukrainian population following the aggression it suffered, I address an equally hopeful appeal to the president of Ukraine to be open to a serious peace proposal,” he said.

He was pleading urgently for a resolution to the crisis “in the name of God,” and he described it as “absurd” that the world was in danger of a nuclear exchange.

Later, Francis sent both Russian and Ukrainian tweets to the two presidents.

Putin declared the annexation of four Ukrainian territories that were only partially seized two days prior, declaring the population of the occupied Donetsk, Luhansk, Kherson, and Zaporizhia regions “our citizens forever.” 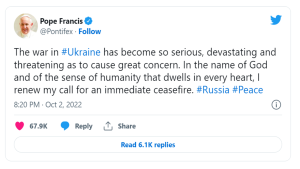 The annexation was denounced as unlawful by Ukraine and its friends in the West, and Kyiv vowed to keep up the battle until all of its land was reclaimed.

A UN resolution that would have labeled Russia’s referendums “illegal” and urged all nations not to recognize any “purported annexation” of the region by Moscow was rejected by Russia.

The eastern supplies hub of Lyman was fully seized by Ukraine on Sunday, marking the country’s biggest victory on the battlefield in recent weeks.

“I strongly deplore the grave situation that has been created in the last few days, with more actions that are contrary to the principles of international law,” Francis said in a clear reference to the annexation. 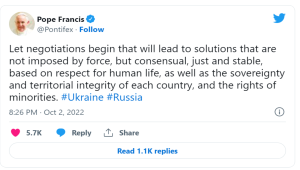 Francis stated it was also important to respect “the rights of minorities and [their] genuine concerns” in reference to ethnic Russians residing in Ukraine.

Francis described it as “anguishing” that the names of locations like Bucha, Irpin, Mariupol, Izyum, Zaporizhzhia, and other places where people had experienced “indescribable sorrow and fear” were used to teach the world about Ukrainian geography.