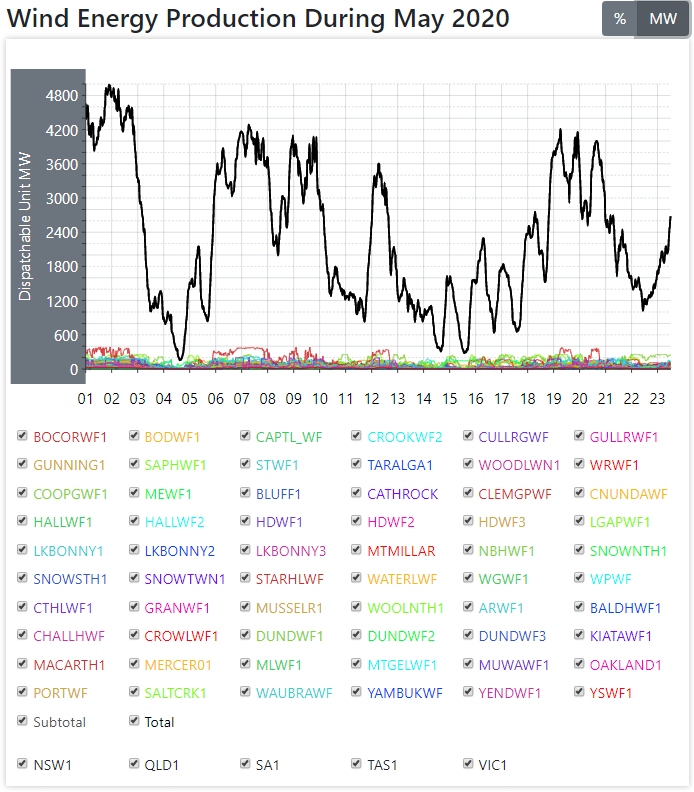 If you’re looking to wreck a grid and send power prices into orbit, then pin your power hopes to wind and solar power delivered at mother nature’s whims.

South Australia did; it suffers the world’s highest retail power prices and became the butt of international jokes for a series of weather-related mass blackouts.

Looking for an example? Take a scan of what’s depicted above.

Spread from Far North Queensland, across the ranges of NSW, all over Victoria, Northern Tasmania and across South Australia its 7,295 MW of capacity routinely delivers just a trickle of that.

Collapses of over 3,000 MW or more that occur over the space of a couple of hours are routine, as are rapid surges of equal magnitude, which make the grid manager’s life a living hell, and provide the perfect set up for power market price gouging by the owners of conventional generators, who cash in on the chaos.

The Australian Energy Market Organisation (AEMO) – a body of wind and solar obsessed boffins – is tasked with keeping the lights on in Australia, notwithstanding the chaos delivered by their beloved windmills and solar panels.

Nowadays, instead of ensuring that there are enough conventional generators online to meet the rises and falls daily demand, these clowns claim to be masters in meteorology; and their daily grind involves predicting wind speed and direction and cloud cover across the country, which in turn determines the output (or nowt-put) from Australia’s fleet of whirling wonders and seas of shiny solar panels.

While the thousands of wind turbines spread across South Australia, Queensland, NSW, Victoria and Tasmania deliver more than their fair share of grid instability and all-round power delivery chaos, there’s a source of mischief much closer to home.

And that’s domestic rooftop solar panels, over which AEMO has absolutely no control. [Note to Ed: or at least about the same degree of control as they have over sunshine and breezes!]

Remarkably, in this clip the Energy Minister joins the market manager in recognising the perverse effect roof-top renewable energy installations have on the electricity supply system. Those installations impose costs far greater than the value they tap in “free” sunlight. This is an outcome common with all wind/solar facilities.

The unmentioned fact in the clip is that there would be negligible take-up of these facilities without subsidies, which annually cost consumers and taxpayers over $4 billion and have caused a doubling of the electricity price.

Though economy-saboteurs comprising greens, the ALP and the Turnbull Liberals have been the most complicit in requiring these, the policy approach has also been shared by people who claim to be conservative rationalists within the Coalition. Astonishingly, the current government remains in favour of the on-going policy of subsidising roof-top solar installations and only one MP, Craig Kelly, is outspoken about the damage being done by the subsidies to renewables!

Having forced closure of reliable cheap coal generators, subsidised wind/solar now comprise a fifth of electricity supply. In addition to their direct subsidies, accommodating them requires expensive management procedures and transmission; even with these the renewables’’ intermittency jeopardises the reliability of the system.

It is testimony to the ignorance of politicians and their and others’ susceptibility to environmental lunacy harnessed by subsidy seekers that we have, over the past two decades, expanded such policies. In doing so, we have destroyed the world’s cheapest and most reliable electricity system, converting an Australian natural competitive advantage into a competitive disability.

We cannot expect an apology, even from Liberal Ministers (Howard, Hunt, Frydenberg have all joined Turnbull in complicity) but perhaps we are now seeing a realisation of the damage inflicted on the economy by the policies.

While the Commonwealth will, hopefully, stick to the current approach of not subsidising new large-scale wind/solar facilities and even extend this to rooftop solar, the government needs to go further and immediately terminate subsidies received by all energy supplies. Even with this, we face a long period of recuperation as the industry mends itself, a process not assisted by on-going subsidies delivered by state governments, which like those of Victoria are primarily aimed at outflanking the Greens to save inner-city seats.
Catallaxy Files 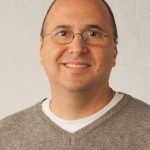 After reading the two next articles, would you call Andrew Dessler (Image) a scientist? I know, doesn’t really matter what you call him – as long as you keep away from the one thing he is not – a scientist!