Why did former U.S. Justice attorney Joe DiGenova call the FBI the “Vietcong”?

According to the Daily Caller, FBI agents are so fed up with the corrupt Justice Department, “they are digging tunnels… they are going to sink that place.”

As The Daily Caller reports:

FBI agents pushed forward, against the wishes of the Justice Department and without the support of bureau leadership, to investigate the Clinton Foundation, according to a Wall Street Journal report.

As a result of the obstacles thrown in their way, DiGenvoa says the agents within the bureau have gone “rogue” and any upper level bureaucrat that gets in their way from investigating Clinton could be exposed…

…Additionally, DiGenova, who was the first to say that laptops belonging to Clinton lawyers Cheryl Mills and Heather Samuelson were never destroyed in a DOJ deal as previously reported, said that the laptop co-owned by Clinton staffer Huma Abedin and her estranged husband Anthony Weiner has information on it that agents likely already reviewed and know the content of.

“I’m sure they’ve opened them up for god sake’s. You don’t think anybody is going to do that when they have access to it? Of course they’ve done that,” he said, noting he believes Comey notified Congress that the agency was reopening the investigation into Clinton’s server and knew the content of the most pertinent emails to the investigation.

FBI agents–agents of the Federal Bureau of, that’s right, Investigation–cannot do their jobs to investigate because the Justice Department is throwing up roadblocks.

In order for truth to be revealed, FBI agents must go rogue.

DiGenova argues this is one of the reasons why James Comey wrote the letter notifying Congress that the investigation on Clinton was being reopened.

Thankfully, there are apparently still some in D.C. that can’t be bought out by the Clintons. 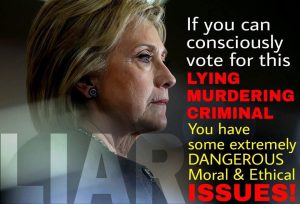