Tropical rainforests are among the biggest contributors to the global greening boom. AAP Image/Dave Hunt

Land plants are absorbing 17% more carbon dioxide from the atmosphere now than 30 years ago, our research published today shows. Equally extraordinarily, our study also shows that the vegetation is hardly using any extra water to do it, suggesting that global change is causing the world’s plants to grow in a more water-efficient way.

Water is the most precious resource needed for plants to grow, and our research suggests that vegetation is becoming much better at using it in a world in which CO₂ levels continue to rise.

The ratio of carbon uptake to water loss by ecosystems is what we call “water use efficiency”, and it is one of the most important variables when studying these ecosystems.

Our confirmation of a global trend of increasing water use efficiency is a rare piece of good news when it comes to the consequences of global environmental change. It will strengthen plants’ vital role as global carbon sinks, improve food production, and might boost water availability for the well-being of society and the natural world.

Yet more efficient water use by the world’s plants will not solve our current or future water scarcity problems.

Changes in global terrestrial uptake of carbon dioxide, water use efficiency and ecosystem evapotranspiration during 1982-2011.

Plants growing in today’s higher-CO₂ conditions can take up more carbon – the so-called CO₂ fertilisation effect. This is the main reason why the terrestrial biosphere has taken up 17% more carbon over the past 30 years.

The enhanced carbon uptake is consistent with the global greening trend observed by satellites, and the growing global land carbon sink which removes about one-third of all CO₂ emissions generated by human activities.

Increasing carbon uptake typically comes at a cost. To let CO₂ in, plants have to open up pores called stomata in their leaves, which in turn allows water to sneak out. Plants thus need to strike a balance between taking up carbon to build new leaves, stems and roots, while minimising water loss in the process. This has led to sophisticated adaptations that has allowed many plant species to conquer a range of arid environments.

One such adaptation is to close the stomata slightly to allow CO₂ to enter with less water getting out. Under increasing atmospheric CO₂, the overall result is that CO₂ uptake increases while water consumption does not. This is exactly what we have found on a global scale in our new study. In fact, we found that rising CO₂ levels are causing the world’s plants to become more water-wise, almost everywhere, whether in dry places or wet ones.

We used a combination of plot-scale water flux and atmospheric measurements, and satellite observations of leaf properties, to develop and test a new water use efficiency model. The model enables us to scale up from leaf water use efficiency anywhere in the world to the entire globe.

We found that across the globe, boreal and tropical forests are particularly good at increasing ecosystem water use efficiency and uptake of CO₂. That is due in large part to the CO₂ fertilisation effect and the increase in the total amount of leaf surface area.

Importantly, both types of forests are critical in limiting the rise in atmospheric CO₂ levels. Intact tropical forest removes more atmospheric CO₂ than any other type of forest, and the boreal forests of the planet’s far north hold vast amounts of carbon particularly in their organic soils.

Meanwhile, for the semi-arid ecosystems of the world, increased water savings are a big deal. We found that Australian ecosystems, for example, are increasing their carbon uptake, especially in the northern savannas. This trend may not have been possible without an increase in ecosystem water use efficiency.

Previous studies have also shown how increased water efficiency is greening semi-arid regions and may have contributed to an increase in carbon capture in semi-arid ecosystems in Australia, Africa and South America.

Remember this study from 2009?

Another inconvenient truth for warmists. New research suggests that the co2 level of the atmosphere was a lot higher during the Medieval Warm Period than today.

First lets look at a paper that shaped the modern view of past co2 levels.

The paper is also covered in the media:
http://canadafreepress.com/index.php/article/6855

Below I have reproduced some of the data from this study for the purpose of scientific analysis. This data shows that co2 levels were much higher than today in 1940 and 1827:

There is no question over the accuracy of the earlier measurements.

This is to be expected because ice core measurements show that co2 levels rise happens 800 years after temperature levels rise. So temperature rise causes co2 rise, not the otherway round. http://joannenova.com.au/global-warming/ice-core-graph/

This is because the oceans release more co2 when they get warmer, and less when they get cooler. http://wattsupwiththat.com/2009/03/21/recent-ocean-heat-and-mlo-co2-trends/

Lets look at the individual periods to demonstrate this:

The 19th century decline in CO2

The drop in co2 in the early 19th century to the start of the 20th century was most likely caused by cooling from the little ice age.

This correlates with the warmest year on record being in 1934: http://www.dailytech.com/Blogger+finds+Y2K+bug+in+NASA+Climate+Data/article8383.htm

While the earlier measurements are beyond questioning, the measurements since 1960 are deeply uncertain. This modern measurement period began warmists started measuring co2 at Mauna Loa in Hawaii. This Mauna Loa sensor reports the gradual co2 rise you see in the graph.

There is just one problem with that: 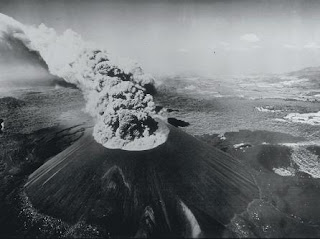 Mauna Loa is on a Volcano!

That’s right, they could have picked anywhere in the world but warmists chose to put the co2 sensor on top of one of the biggest volcanoes in the world! No wonder it shows a rise in co2!

Now lets look at a period not covered by the graph, but a period we know was a lot warmer than today. The medieval warm period occured some time in the past around medieval times. Ie 1200AD.

The scientific consensus is that in 1200AD the climate was excruciatingly hot. Plagues and disease swamped the world and people were dying of heat exhaustion. The situation got so bad that the Vikings moved to a large snow covered island north of Iceland to escape the heat. The ice on this island subsequently melted and so the Vikings called it Greenland. Greenland soon became the wine and farming capital of the world.

Didn’t last though. Eventually the climate shifted back again and the Vikings were wiped out by ice.

Putting It All Together

The answer is that based on the best science available, co2 levels may have been over 2000ppm in 1200AD! Is it coincidence that 1200AD was 800 years ago? Recall the fact mentioned earlier: “ice core measurements show that co2 levels rise happens 800 years after temperature levels rise”. Everything is fitting into place and this last piece seems to complete the puzzle.

Conclusion
It has been shown that co2 levels could have been over 5 times higher just 800 years ago. If this is the case a doubling of co2 is proven to not cause any significant warming and any ideas for more taxes should be immediately abandoned.