Related: COP26 Climate Summit Is An Elite Farce — Innovation Is The Solution

On Friday, the Supreme Court of the United States (SCOTUS) agreed to hear cases that challenge the Environmental Protection Agency’s (EPA) authority to regulate carbon dioxide (CO2) from fossil fuel-powered power plants. The lawsuits that led to this decision were filed by Republican-controlled states and a West Virginia coal company who sensibly argued in favor of placing limits on EPA’s authority to regulate. At issue is a legal technicality known as “non-delegation doctrine,” something the Cornell Law School describes as the “principle in administrative law that Congress cannot delegate its legislative powers to other entities.”

West Virginia Attorney General Patrick Morrisey, who signed the legal petition, tweeted that the court’s decision to hear the case was the:

“Biggest Supreme Court news since our win in Feb of 2016. We must not allow Biden’s EPA to impose unlawful climate regs on our nation.”

Hopefully, the court will use this as an opportunity to rule broadly against Congress, delegating such important decisions to agencies such as the EPA. Then Congress would have to pass new laws authorizing the EPA to regulate CO2, something that would be unlikely to pass, given the current make-up of the Congress.

But it is not just legal technicalities that should block the EPA from regulating CO2 emissions under the Clean Air Act. It is also that the original “endangerment finding” applied by the EPA against CO2 is wholly unjustified—this benign gas is anything but pollution and, contrary to the Biden administration’s claims, cannot cause dangerous climate change.

With the help of our friend David Pristash, an expert in all things CO2, we outline why this is the case.

Note 1: All the work we do here is based on published data from NOAA and NASA without alteration.

Note 2: In working with heat energy, we must use degrees Kelvin not Celsius or Fahrenheit. The scientific/engineering reasons for this are beyond the scope of this article.

Pristash provided us with two important graphs and a page from a blockbuster scientific publication that throws President Biden’s “climate emergency” narrative out the window. The graphs are based on the following logic:

CO2 was first measured scientifically starting in 1958. Temperatures had been measured back to 1850 but were not converted into a so-called “global” temperature until after World War II. So, what was done was to start in 1958 and set that year as the base for both CO2 levels and global temperature. Then each month from that point, a percent increase is calculated for both (with the temperature change calculation being based on changes in degrees Kelvin), and that way, we are comparing the changes on an equal basis. Therefore, if CO2 is the cause of temperature changes, we would see an obvious significant trend with CO2 going up first and temperature following that.

The first Chart, Chart 8a below, shows the result of that logic with the percentage changes in equal ranges of the axis for both CO2 and temperature. You can see that CO2 has gone up almost 35% since 1958, while it is hard to see any change at all in the “temperature of the planet.” The CO2 rise has a seasonal sawtooth pattern as the plants pull a lot of CO2 out of the atmosphere in the summer. Then the concentration of the gas goes up in the winter from the dormant plants and trees and the increased heating from burning fossil-based fuels. There has been no change in the trajectory of the CO2 curve since this method was first calculated in 2007. 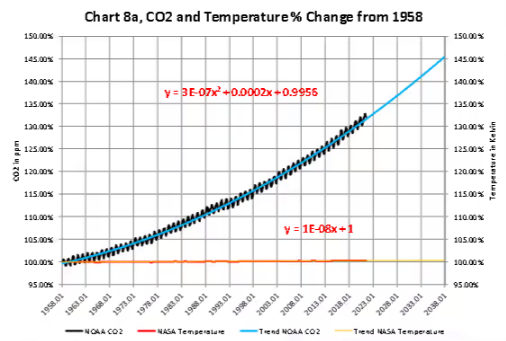 The next chart, Chart 8, below, presents the same data except that the scale for the temperature axis has been expanded ten-fold. For CO2, the left axis is still from 95% to 150%. But, for temperature, the range is now 99.5% to 105%, one-tenth of the CO2 value. The increase in temperature is under 0.4% compared to CO2 at 35%. Clearly, there must be reasons other than increasing CO2 for the recent modest temperature rise of our planet. 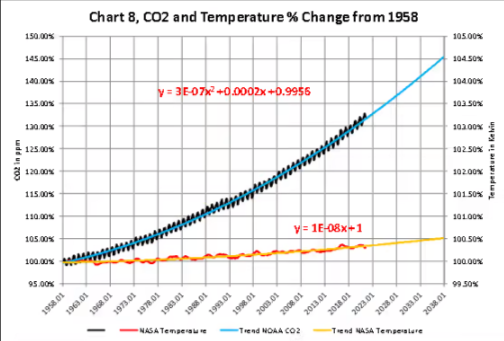 What follows next is a page from a complicated scientific paper written by W. A. van Wijngaarden and W. Happer published on June 8, 2020, titled Dependence of Earth’s Thermal Radiation on Five Most Abundant Greenhouse Gases. This 38-page work has very significant ramifications to the validity of the Biden administration’s climate change narrative. 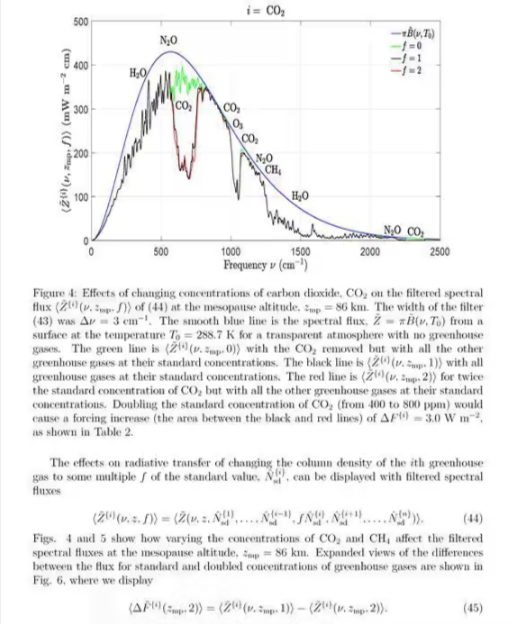 The blue line in the above graph is an indication of the radiation from the Sun before any absorption by greenhouse gases (GHG) occurs. The green line shows absorption from GHGs other than CO2. The black line shows the absorption from all GHGs, including as a result of the current level of CO2. The red line shows the impact of a doubling of the current level of CO2, with all other GHGs remaining at today’s concentration. As can be clearly seen, the black and red lines are virtually identical, indicating no significant additional change to temperature from CO2 rise is possible.

The bottom line to this scientific study is that there is NO DANGER to additional CO2 in the earth’s atmosphere. Any warming that might be caused by CO2 has, for the most part, already been accounted for. Page 13 from that report shown above, clearly shows that the Sun’s radiation absorption bands for CO2 are now saturated, and there will be no additional effect.

This next picture is a graph of the levels of CO2 and temperature going back 590 million years. It demonstrates that the estimated range in temperatures of earth is from 12 degrees C to 22 degrees C, with the mean of 17 degrees C. Clearly, we are at the low-end today at 15 degrees C as we are still warming from the last glacial period, which ended over 10,000 years ago. 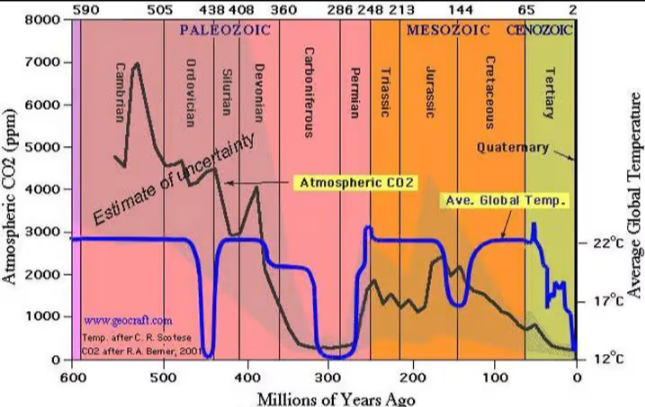 We are actually approaching the middle of a cooling period caused by the current reduced output from the Sun (22-year cycle), which started almost 20 years ago. This cold period will run for probably 15 or more years before we get any more warming in the current 1,000-year cycle that will end in the middle of the 22nd century. At that point, we will get progressively colder for around 500 years. But keep in mind that because all these cycles are not fixed, there is a lot of variability to the time frames.

Last week’s SCOTUS decision was a “huge deal—and a big surprise,” said Jeff Holmstead, EPA air administrator during the George W. Bush administration who now works at the energy lobbying firm Bracewell. What an amazing Christmas present it would be for Americans who are struggling to afford today’s inflated electricity prices if the court did require Congress to pass new laws allowing EPA to regulate carbon dioxide. Then, in leading the charge to defeat such legislation, Republicans can tell the world the truth – THERE IS NO NEED FOR THE EPA, OR ANY AGENCY ANYWHERE, TO REGULATE CARBON DIOXIDE, THE GAS OF LIFE!

The “complicated scientific paper written by W. A. van Wijngaarden and W. Happer ..” is a fine and dandy, but irrelevant for one reason and one reason only – Convection!

And because of convection the paper will just be that, a paper.

And there’s never been so many as today: