Calvin Freiburger reports for the past week, the Left has ramped up its violence, dishonesty, and hypocrisy to almost-unprecedented levels, and it has been aggravating to watch the moderate/elite/NeverTrump faction of the Right groveling before it. 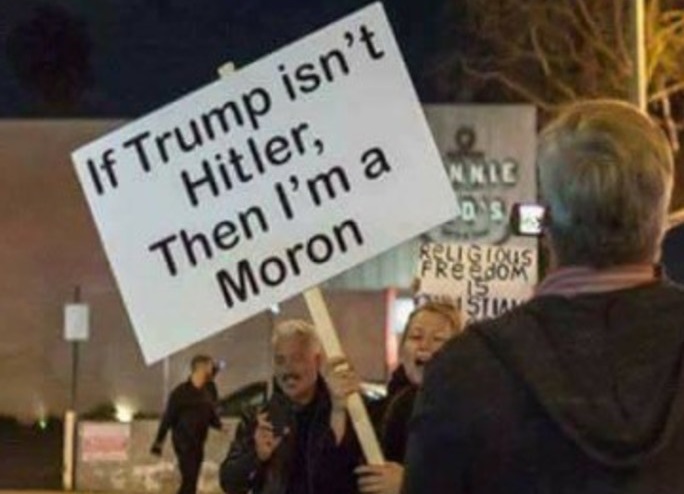 So we thought this was the perfect time to highlight the following video, which says everything we’re thinking right now — and does it with fantastic wit and style.

For good measure, let’s also recall a small sampling of the Left’s true violent nature. Help us make this video go viral to entertain, inspire, and inform as many people as we can!

VIDEO: Antifa Attacks Conservative But Never Expected THIS To Happen!

More Than 1,000 Leftists Gathered In Chicago To Cheer A Convicted Murderer Who Hates Israel

You’ve Heard Liberals Compare Trump to Hitler. So We Asked a Woman Who Was Born in Nazi Germany…

A popular talking point on the left is that Donald Trump has things in common with Hitler.

But is this the case? Independent Journal Review decided to speak to a woman born in Nazi Germany about the comparison.

We talked with Marion Ingeborg Andrews, who goes by Inga. She was born in Dusseldorf, Germany, in 1940 during Hitler’s reign.

While most kids were playing with friends, Andrews was hiding in air raid shelters and helping to clean up the rubble from destroyed buildings to rebuild her city.

“What is going on in this country is giving me chills. Trump is not like Hitler. Just because a leader wants order doesn’t mean they’re like a dictator.

What reminds me more of Hitler than anything else isn’t Trump, it’s the destruction of freedom of speech on the college campuses — the agendas fueled by the professors.

That’s how Hitler started, he pulled in the youth to miseducate them, to brainwash them, it’s happening today.”

Andrews drove home her point further for the younger generation:

“It saddens me that we are teaching garbage in the schools and in the college. We don’t teach history anymore. History repeats itself over and over.

The kids out there today haven’t ever lived through a war like I did. I remember sitting in a rock pile, cleaning rocks, to rebuild Germany. I remember eating maple leaves and grass to survive.”

She later made it to the U.S. when her mother married an American, but her journey wasn’t without hurdles.

“It took six years because she had worked in Germany. It took six years to clear her to be able to be married. Then when you married an American, because we were the enemy, you had to wait.

We had to go from Heidelberg to Bremerhaven where another camp was. This camp was run by the U.S. military. They vetted us in both places. There were all these German brides with their children and families who had to be vetted again for three of four days before they could get on the ship.

The ship we took was the U.S.S. Washington. We arrived in New York in March of 1953. My mother, Meta Weinbach, and I still had the last name Muller.

So we had a vetting process like what we are going through now because you have to have this to make the country safe.”

Then Andrews had some choice words for the protesters in the streets destroying property:

“America needs to grow up. The young people who are rioting and destroying property, who have no respect for elders and freedom of speech, I was so proud to become a citizen of this country.”

She opened up about how she accepted American culture and values:

Andrews continued on about her desire to become an American:

“At school, they put me in first grade even though I was a teenager because I didn’t speak English. The teachers would take time at their lunch time to teach us how to speak English.

But they came to find out that I was hiding in the bathroom stall with my legs up eating my braunschweiger and onion sandwich, so nobody would talk to me.

We would go to the malls and we wouldn’t speak our foreign language, we would speak English. Because we believed we needed to honor the country that opened its doors for us. It was rude to do otherwise.”

Andrews returned to the present day with a message for those attacking freedom of speech:

“Professors shouldn’t be telling their students to go after freedom of speech. They should be telling them that this is the greatest country in the world.

The demonstrators can’t tell you why they’re demonstrating. I’m not a Republican. I’m not a Democrat. I just want the country to be at peace.

I see what is happening here reflecting some of the things we saw in Germany, and it’s terrifying. It’s sad. But it’s not because of Trump. It’s because of poor education.

Trump is not like Hitler. The theory that he is is propaganda. Yes, I lived through some of Nazi Germany, but all you have to do is read some books about that period to see how wrong that theory is.”

She finished by sharing a personal story.

“I had an aunt who was in the Olympics. My aunt got all this extra stuff from Hitler and was surrounded by this propaganda,” she said, before explaining how she couldn’t keep a relationship with her aunt. “I couldn’t have anything to do with her. Even after the war, she was calling the Jewish people, of whom I was friends with, ‘dirty Jews.’”

“My point in saying all this is that if people aren’t able to see outside of one world view, that’s what happens,” Andrews concluded. “They buy the propaganda. And that’s what is happening today. And if people aren’t educated properly and given the ability to think freely — we will repeat that history.”

Due to numerous inquiries into the authenticity of Inga’s story, she’s provided Independent Journal Review with several pieces of proof to back up her claims.

Evidence of their time in Heidelberg:

Inga with her father Heinz Muller during World War II:

Upon sending these pieces of proof to back up her story, Andrews told us, “It’s exactly what I’ve been saying. Some people want to see through one world view, so they couldn’t even believe the story I lived.”