If this isn’t going to force the US to implement “Carbon-Tax” – nothing will!! 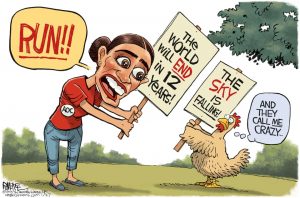 The NYC Green New Deal “will cut purchases of red meat by 50 percent in its city-controlled facilities such as hospitals, schools, and correctional facilities.”

When Mayor de Blasio signed New York City’s crazy Green New Deal into law, he reiterated Alexandria Ocasio Cortez’s outrageous and untrue claim that “we only have 12 years” left to save the world from permanent climate change.

But there’s an upside to this stupidity, more people are about to wake up to the corrupt, “green” madness of the totalitarian nazi-left, at some point there’s enough people saying NO! and the army of low IQ leftists will lose, hopefully in the next election, if not sooner ..