Tobias Billstrom, though, asserted that “we will always support for gender equality.”

The previous left-wing administration introduced the policy in 2014, becoming the first in the world to prioritize gender equality in its international relations.

The so-called “feminist government” has raised eyebrows all over the world.

Immediately following the Tuesday presentation of the new members of the Swedish cabinet by Prime Minister Ulf Kristerrson, Mr. Billstrom made the radical policy change public.

“Gender equality is a core value for Sweden and this government, but we will not conduct a feminist foreign policy,” he said.

“Because labels on things have a tendency to cover up the content”, he said.

The strategy was introduced by Margot Wallstrom, a former foreign minister, who emphasized the significance of the three “R’s”: “rights, representation, and resources.”

Among the main focuses of the foreign policy were rights to sexual and reproductive freedom, economic independence, and political engagement in civil society.

However, the Swedish Minister for Gender Equality Paulina Brandberg, a member of the Liberal party who has previously backed a “feminist foreign policy,” declared that she would “ensure the government’s policies are feminist” for “as long” as she held the position.

There have been diplomatic disputes all around the world as a result of the radical foreign policy.

2015 saw the recall of the Kingdom of Saudi Arabia’s ambassador to Stockholm as a result of Ms. Wallstrom’s comments against the country’s record on women’s rights and democracy.

After blocking a speech by the former foreign minister, Sweden promptly terminated a lengthy arms agreement with Saudi Arabia. The comments were deemed “offensive” and a “blatant intervention in its domestic affairs” by Saudi Arabia.

Sweden attempted to include a resolution stating sexual and gender-based violence should be grounds for sanctions during its tenure on the UN security council in 2017.

Advocates for women’s rights from Somalia and Nigeria were inspired to address the council as a result of Sweden’s membership.

The inclusion of gender equality issues in Colombia’s 2016 peace agreement, new policies on female political representation in Moldova and Somalia, and new legislation in about 20 countries—often pertaining to gender-based violence, female genital mutilation, and child marriage—were all credited to Sweden.

However, the policy has its detractors as well. Swedish civil society organizations criticized the previous administration for exporting weapons to autocratic governments with a history of violating human rights.

A 26-year-old climate minister was also appointed by the new government, which is supported by a far-right party, in the nation where Greta Thunberg, a teen climate activist, hails from.

More than a month after Swedes went to the polls, fresh appointments have been made. 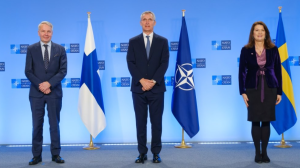 The far-right Sweden Democrats, who received about one in five votes and overtook the Social Democrats, who have controlled Swedish politics since the 1930s, as the second-largest party, were the greatest winners in the election on September 11. The anti-immigration party, which emerged from a neo-Nazi organization at the end of the 1980s, won 5.7% of the vote in 2010 and 17.5% of the vote in 2018.

The Sweden Democrats have promised to support the government in parliament to give it a majority in exchange for policy commitments, particularly on immigration and crime, even if they will not join the cabinet.