With a ride over one of the most picturesque tracks through the Alps, a Swiss railway firm broke the record for the world’s longest passenger train over the weekend

Here are four things to know about the new record:

*How long was the train? The train was made up of 100 carriages. (AP: Keystone/Yanik Buerkli)

A total of 100 cars, totaling 1.9 kilometers in length, made up the Swiss railway.

The train carried 150 passengers as brilliant sunlight gleamed off its gleaming, silver roof, and a digital destination sign stating “Alpine Cruise” was mounted on the front.

For contrast, a typical Sydney passenger carriage is roughly 20 meters long; in an eight-carraige train, it equates to slightly over 160 meters, including the driver’s compartment.

*Where did the train go? 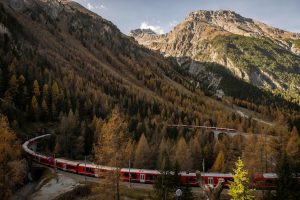 The railway traveled 172 kilometers (110 mi) south-east of Zurich from Preda to Berguen along the Albula-Bernina route.

In 2008, UNESCO added the almost 25-kilometer route to its list of World Heritage Sites.

The train’s hour-long ride passed via 48 bridges, including the curving Landwasser Viaduct, which rises 65 meters above the ravine below, and 22 tunnels, some of which wind through mountains.

To see the train’s sections travel across the Alps, tens of thousands of rail enthusiasts lined the valley.

*Why did they attempt to break the record? 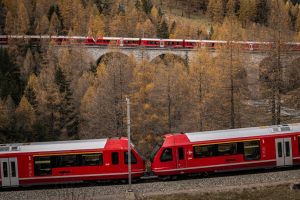 Renato Fasciati, director of the Rhaetian Railway Company, stated that the record attempt was made to honor 175 years of Swiss railroads and to showcase some of Switzerland’s engineering accomplishments.

He held up the Guinness World Records certificate and stated that it had been extremely difficult to guarantee the safety of such a long train.

The 25 trains had to accelerate and brake at the same moment, and the seven train drivers and 21 technicians on board had to make sure of it, he claimed. They were all “directed by the first… driver.” 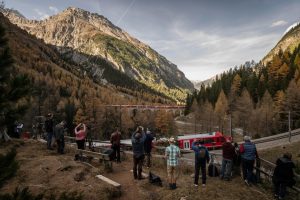 Thousands gathered around the Swiss alps to see the train go past. (AP: Keystone/Gian Ehrenzeller)

Few nations have a rail system as extensive as Switzerland, which is renowned for its on-time trains.

The first rail service in the affluent Alpine nation began running on August 9, 1847, traveling 33 minutes over 23 kilometers from Zurich to Baden.

*What was the previous world record? 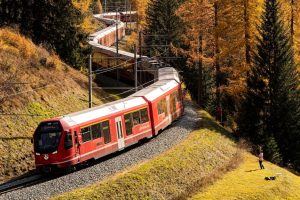 Even though some freight trains are longer than 3 kilometers, the event on Saturday featured the longest passenger train ever ran.