The global warming hysteria was reaching a crescendo in the lead up to the climate confab in Copenhagen in 2009 when a civic-minded person released the Climategate emails, deflating the whole thing. Those emails, concocted from the fevered imaginations of the scientists involved.

Nigh on 10 years have passed since then and we are currently experiencing another peak in the hysteria that seems to be coordinated worldwide. But why? Why now? The global warming scientists have plenty of time on their hands and plenty of money. Idle curiosity would have got some to have a stab at figuring out what is going to happen to climate. Do they see an imminent cooling and they have to get legislation in place before that is apparent?

The passage of those ten years has given us another lot of data points on the global warming. There are now 40 years of satellite measurements of atmospheric temperature and this is how that plots up for the Lower 48 States: 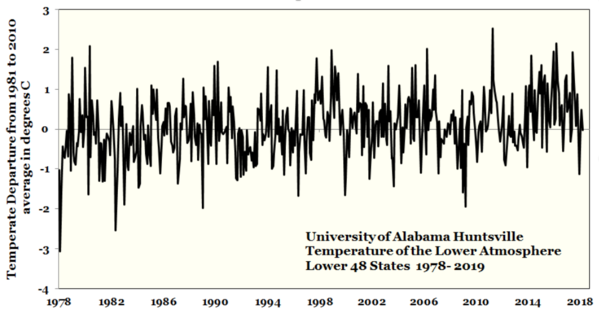 What the graph shows is the departure from the average for the 30 years from 1981 to 2010. The last data point is February 2019 with a result of -0.03 degrees C. So we have had 40 years of global warming and the temperature has remained flat. In fact it is slightly cooler than the long term average. Is it possible to believe in global warming when the atmosphere has cooled? No, not rationally. Is it possible for global warming to be real if the atmosphere has cooled? Again no. 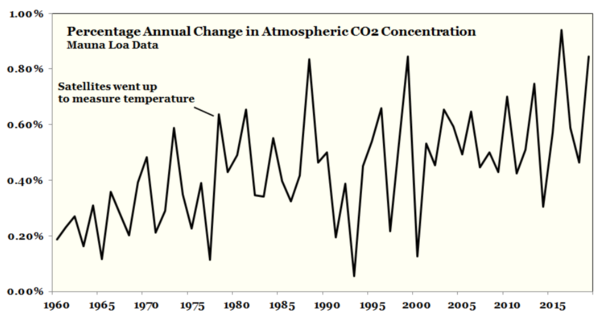 What it shows is that the driving effect has been in a wide band from 1979 when the satellites to measure temperature went up but the trend is flat. Think about that – 40 years of forcing and no result in the actual atmospheric temperature. If it was ever going to happen it would have happened by now.

The opposite of global warming is global cooling. What are the chances of that? Pretty good in fact. Only one graph is need to show the potential for that – the aa Index which is a measure of the Sun’s magnetic field strength. Records of that have been kept since 1868: 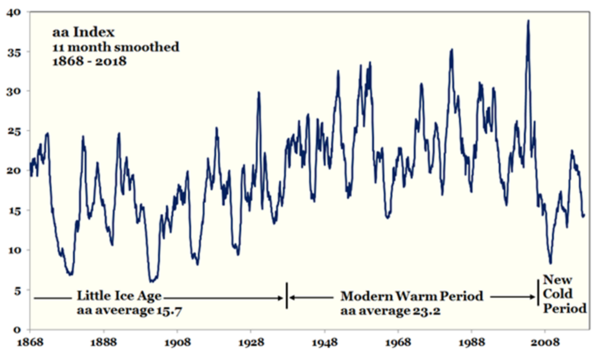 The second half of the 20th century had a solar magnetic field strength that was 50% higher than that of the last 60 years of the Little Ice Age. That ended in 2006. We are now back to the solar activity levels of the 19th century and that will bring the sort of climate our forbears had then.

And so it has come to pass. January-February had record cold over North America. Seemingly the polar vortex was everywhere because Japan also had record cold.

In the meantime there is no evidence for global warming and the opposite is happening, as shown by the record cold we have just experienced. It is time to stop giving global warmers the benefit of doubt – they are loons. That includes Rick Perry.