It was One of the biggest demonstrations in London’s history that has been completely ignored by the media.

Football Lads Alliance march against Islamic extremism and radical Islamic terrorism in London. Liberals and leftists in the West use the made up term “Islamophobia” to portray anyone who criticizes Islam as a “racist”. They ignore the fact that Islam is an ideology that has nothing to do with race. There is an attempt in the West to impose a sharia-blasphemy law to criminalize criticism of Islam.Radical Muslim terrorists all over the world carry out terror attacks “in the name of Allah”.

They justify their violence by quoting verses from the Quran. Politicians in the West always claim “Islam is a religion of peace”, Despite the fact that some Muslims and even former Muslims such as Ayaan Hirsi Ali, Sandra Solomon claim that there are verses in the Quran and the Islamic scriptures that call for violence against infidels that often what leads to the violence and terrorism carried out against infidels by Muslims.

Christians are the world’s most persecuted religious group, according to studies. Christians and other Non-Muslim minorities throughout the Muslim world are being persecuted for being non-Muslims.

The Christian community in Iraq and Syria was completely annihilated by radical Muslims, anyone who could not escape and refused to convert to Islam was executed. The Western world ignores the cruel persecution of Christians in the Muslim world. Where are all the human rights organizations of the UN? Where are all human rights organizations in the West? Please pray for the Christian minorities in the Muslim world.

Liberals and leftists in the West use the made up term “Islamophobia” to portray anyone who criticizes Islam as a “racist”. They ignore the fact that Islam is an ideology that has nothing to do with race. There is an attempt in the West to impose a sharia-blasphemy law to criminalize criticism of Islam.

It started when Saudi Arabia and Muslim countries tried to pass a UN resolution to force Western states to criminalize criticism of Islam. The Parliament in Canada passed “Motion M-103” to condemn the so-called “Islamophobia (Fear of Islam)” in a preparation for a blasphemy law in Canada. According to the sharia blasphemy law anyone who criticizes Islam or the Prophet Muhammad should be killed.

Under Sharia blasphemy law in Saudi Arabia and Iran Muslims are executed if they are accused of blasphemy. In Pakistan, the situation is even worse, radical Muslims use the blasphemy law to persecute the Christian minority.

YouTube: Robert Spencer video “Is Islam A Religion of Peace?” “isn’t suitable for all advertisers”

I got this message this morning from YouTube about the video above, which dates from 2016: 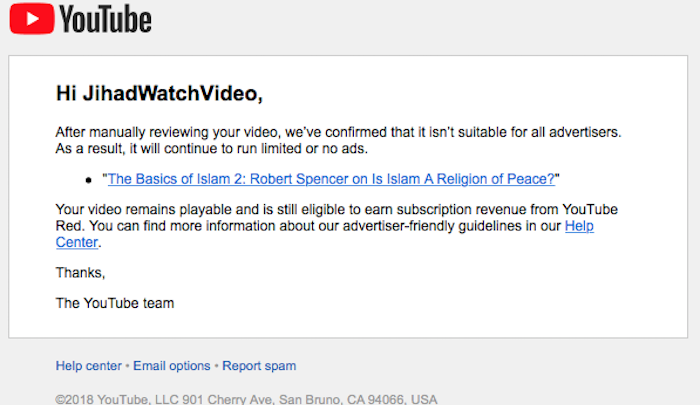 Now, I’ve never had ads run on any of my YouTube videos, and have never received a penny from YouTube for them. They were demonetized collectively from the beginning. In light of that fact, I found it curious that YouTube would see fit to send me this notice now, telling me that one random video from two years ago was going to run with “limited or no ads.” All my videos have always run with no ads.

This is just still more of the social media giants’ ongoing efforts to stigmatize and ultimately silence all foes of jihad terror, and all those who stand against the far-Left agenda.

Watch the video and ponder the situation we are in, when a reasoned presentation of demonstrable facts would be considered controversial and “not suitable for all advertisers.”