Just over a week after formal peace talks in South Africa got underway, the African Union mediator announced that the parties in the war in Tigray, in northern Ethiopia, have reached an agreement on a “permanent suspension of hostilities”.

Olusegun Obasanjo, the former president of Nigeria, also stated on Wednesday that the governments of Ethiopia and Tigray had reached an agreement on “orderly, smooth, and coordinated disarmament” in addition to “restoration of law and order,” “restoration of services,” and “unrestricted access to humanitarian supplies.”

At a press conference, he declared that the deal was a new “dawn” for Ethiopia.

Regional forces from Tigray have been engaged in combat with Ethiopia’s federal army and its allies, which also include forces from other regions and neighboring Eritrea, since the conflict first broke out in November 2020.

RELATED: ‘Where is humanity?’ ask the helpless doctors of Ethiopia’s embattled Tigray region 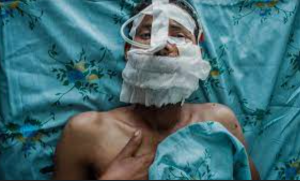 One of the greatest casualties of the brutal civil war in Ethiopia has been its health care. With the country’s northern Tigray region under blockade and cut off from most communications, a disastrous humanitarian crisis has been unfolding in a war that has become the world’s unseen war.

The groundbreaking agreement announced on Wednesday was praised and will be put into effect by Ethiopian Prime Minister Abiy Ahmed.

“The commitment to peace remains steadfast. And our commitment to collaborating for the implementation of the agreement is equally strong,” he said in a statement.

The rebels in Tigray praised the agreement and said they had made compromises.

“We are ready to implement and expedite this agreement,” said the head of their delegation, Getachew Reda.

“In order to address the pains of our people, we have made concessions because we have to build trust.

“Ultimately, the fact that we have reached a point where we have now signed an agreement speaks volumes about the readiness on the part of the two sides to lay the past behind them to chart a new path of peace,” said Reda.

Thousands of people have died, millions have been uprooted from their homes, and hundreds of thousands are on the verge of starvation as a result of the fighting, which at times has spread from Tigray into the neighboring areas of Amhara and Afar.

According to a UN spokesman, UN Secretary-General Antonio Guterres appreciated the ceasefire.

“It is very much a welcome first step, which we hope can start to bring some solace to the millions of Ethiopian civilians that have really suffered during this conflict,” the spokesperson for the secretary-general, Stephane Dujarric, told reporters.

The accord was praised by the US as well.

“The African Union’s announcement of the signing of a cessation of hostilities between the government of Ethiopia and the Tigray People’s Liberation Front represents an important step towards peace,” Department of State spokesman Ned Price told reporters.

It is encouraging to see that the two parties have reached an agreement to end hostilities because the conflict had a catastrophic impact “socially, politically, and economically.”