Lourdes Malón Pueyo, 18, was executed on August 20, 1936, at the onset of the Spanish Civil War. Right-wing Falangists shot her dead as she attempted to flee across the mountains. Her sister Rosario, 23, died the same day inside the cave where she had taken shelter with Lourdes, in addition to her father and brother. Their crime? Having embroidered a republican flag for the Socialist Youth association of Uncastillo, a municipality of Zaragoza, in northern Spain. From left to right, the siblings Rosario, Mariano and Lourdes Malón.

Between 2013 and 2020, five archaeological expeditions were undertaken in search of the skeletal remains of both young women. Rosario’s body was found in 2017, but not her sister’s, which is still missing. But the search, sponsored by the Charata Association for the Recovery of the Historical Memory of Uncastillo, with support from local and provincial funding, yielded another unexpected series of findings: the walls of the medieval monastery of San Esteban de Oraste, a Visigothic tomb, ceramics from the same period, a bell fragment with depictions of a friar in a chasuble, and a set of coins from the 11th century.

The study The archaeological site of Peñas de Santo Domingo: the phases of Hispanic-Visigothic and medieval occupation, by the specialists Francisco Javier Ruiz Ruiz, Tomás Hurtado Mullor, Roger Sala Bartrolí, Pedro Rodríguez Simón and José Ignacio Piedrafita Soler, notes that the place where both sisters were murdered lies within the municipality of Longás, close to the Pyrenees mountain range. An 18th-century shrine dedicated to Saint Dominic, which still stands, lends its name to the entire area, which also contains a cave – the same one where the family took shelter.

RELATED: Spanish Civil War: The woman who took a baby rattle to her execution 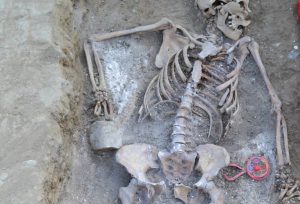 Archeologists found the toy lying next to the body of Catalina Muñoz, who was shot in 1936 and buried in Palencia, northern Spain