Taliban acting Interior Minister Sirajuddin Haqqani speaks during a graduation ceremony at the police academy in Kabul, Afghanistan, on March 5, 2022. Haqqani, a designated terrorist by the U.S., said in the rare public appearance that fighters guilty of “misconduct” were being penalized after a string of abuse allegations.

Congressman Michael McCaul (R-Texas) and his fellow Republicans on the House Foreign Affairs Committee used the anniversary of the Biden administration’s disorganized withdrawal from Afghanistan to release an interim report titled “A ‘Strategic Failure’: Assessing the Administration’s Afghanistan Withdrawal.” Even before the report was released, however, the White House launched a preemptive strike against its content through the use of a memorandum to “Interested Parties”

In a document titled “Re: Recently Released Partisan Report on the Afghanistan Withdrawal,” National Security Council spokesman Adrienne Watson said that the GOP report was replete of “inaccurate characterizations… and false statements,” among other things.

The White House memo claimed, on the other hand, that the Intelligence Community had determined that al Qaeda has not reconstituted in the nation. The memo claimed that one of the report’s allegedly false claims was that “we are less safe today because of the withdrawal because al Qaeda has reconstituted and Afghanistan has become a terrorist haven.”

The memo also noted that Ayman al-Zawahiri, the group’s leader, “was the only key al Qaeda figure who attempted to reestablish their presence in country,” and that “there are less than a dozen al Qaeda core members who remain in Afghanistan and they probably were located there prior to the fall of Kabul.”

RELATED: Afghanistan: Peace at a price in the Taliban’s heartlands 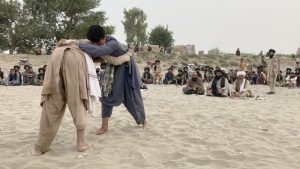 Two teenage males are caught in an embrace and attempting to wrestle each other to the ground in a dusty area of land near to the Helmand river, along what was once one of the war’s frontlines. The audience is seated in a large circle, watching excitedly as the early evening light starts to fade.

We are in the southern Afghan province of Sangin, the scene of some of the worst conflicts in the previous 20 years. While some homes are being repaired as inhabitants return home and enjoy their first taste of peace in years, much of the town is still in ruins.

There are no women in the group because they are largely kept behind closed doors in this extremely conservative area of the country. Others are merely relieved that the bloodshed that has dominated their life has finally come to an end. Many people here supported the Taliban’s struggle against the old Afghan government and US-led forces that supported it.

“Life is very good now, people are happy,” says Lalai, who has organised the wrestling match. “There’s freedom and no problems,” chimes in another man.