Related: China Puts Economy First, Climate Last (they do not need to pretend to care about the earth or scare its people by FAKE existential threats, they are already both corrupt and in power ..)

By Jack Cashill – The American Thinker

As I have learned the hard way, the science behind climate change has no more predictive real-world value than the science behind COVID. When put to the test, scientists cannot tell you what will happen next year, let alone next century, but that does not stop them from pretending they can.

Three years ago, my new neighbor here on Lake Erie asked if I wanted to go in with him on a seawall. Having spent thirty summers on the Rust Belt Riviera, I politely declined. As I explained, on only one occasion during those years had waves lapped against even the base of my heavily vegetated ten-foot bank. Besides, walls cost a lot of money. 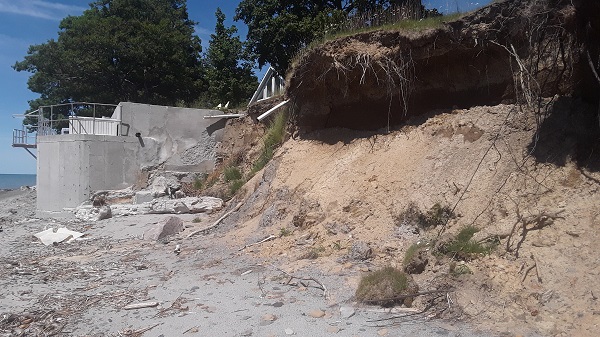 Although I have never trusted it, the science of climate change was on my side.  In 2002, National Geographic published a scary, much cited article titled “Down the Drain: The Incredible Shrinking Great Lakes.”  Someone seems to have pulled the plug on this article, as I learned about it only from reading a 2012 National Geographic article by Lisa Borre that identified the culprit for this shrinkage as climate change, “Warming Lakes: Climate Change and Variability Drive Low Water Levels on the Great Lakes.”

According to Ms. Barre, “Down the Drain” documented “declining lake levels and the potential economic and ecological consequences for the region.”  Ten years later, Barre tells us, “[t]he story continues to unfold, as water levels remain lower than normal.”  Barre’s article features several alarming images of stranded boats and sandy stretches where water once flowed.  On a dozen occasions in the article, Barre cites “climate change” as the likely explanation for the shrinking lakes.

Citing various climate scientists, Egan described the reason for the shrinking trend this way: “[w]ith little to no protective ice cap, chilled air whooshing over relatively warm water leads to more cold-weather evaporation.  The result of this thermal avalanche triggered by just a tiny bump in air temperatures: the surface of the lake is literally going poof into the sky.”

In 2013, Peter Sinclair, reputed to be “the sharpest climate denier debunker on YouTube,” reprinted section of Egan’s article under the headline “Lower Great Lakes Levels – Another New Normal?”  To dissent was to risk ridicule, to be named Sinclair’s “Climate Denial Crock of the Week.”

Suffering from a novel first-world strain of self-indulgence, I remember worrying that if the lake receded too far, my view would be diminished.  (Place crying emoji here.)  I had seen photos taken in the 1930s from my property in which the beach extended 50 or more yards from my bank and had trees growing on it.

These record-low water levels in the 1930s are confirmed by charts dating back to 1860 and now maintained by the EPA.  There seems a commonsense explanation for the phenomenon.  The Dust Bowl year of 1934 was the hottest year on record in the United States, and 1936 was nearly as intense.  Given the hot and dry conditions, high levels of evaporation would likely account for the low Great Lakes water levels, especially in Lake Erie, the shallowest and southernmost of the lakes.

On a relevant side note, for nearly ten years, scientists claimed that 1998 was hotter than 1934.  It took blogger Steve McIntyre of Climateaudit.org to alert NASA scientists that their data were wrong.  Upon checking, scientists had to agree, and in 2007, they grudgingly booted 1998 from the top spot.

Lest the climate cultists question the righteousness of their anxiety, climatologist Gavin A. Schmidt of NASA’s Goddard Institute for Space Studies reassured them that the world was still in peril.  Nothing more was at stake with the demotion of 1998, he argued, than “the inconsequential bragging rights for certain years in the U.S.”  He continued, “Global warming is a global issue, and the global numbers show that there is no question that the last five to 10 years have been the hottest period of the last century.”

No question?  The fact that a blogger — a mining consultant in real life — was able to correct NASA’s record does not say much for the solidity of the science even here in the United States.  As to the rest of the world, it would be nuts to trust countries whose science leaders make Anthony Fauci look like Kristi Noem.

This shrinkage theory made sense until it didn’t.  The “didn’t” period began about a year after shrinkage became settled science.  By the time  I made my decision not to build a wall in 2018, lake levels were back to their historic norms.  By the summer of 2019, even the The New York Times noticed that the lakes weren’t shrinking at all.  They were growing.  For all my distrust of climate change activists, I did not suspect they could be proven so spectacularly wrong so quickly.

Apparently, the climate science of 2013 was not exactly “settled.”  Wrote the Times’ Mitch Smith in 2019, “The higher water, which set records this summer on some Great Lakes, could be part of an expensive new normal.”  Left unsaid was that this “new normal” fully reversed the old “new normal” from just six years prior.

Whatever the trend, climate change activists have been quick to find a new, scary rationale to explain it.  “Within about a decade, the Great Lakes have gone from record low levels to record high levels, a stunningly fast swing,” claimed the enlightened folks at the Alliance for the Great Lakes.  A quick look at the charts shows this claim to be false for each of the Great Lakes, but I digress.

“Scientists are in agreement that the sharp shifts in water levels are due to climate change,” the Alliance folks continued.  “More specifically a warming climate will continue to cause extreme weather, including severe floods and droughts, which spells disaster for lakeside homeowners, towns and cities, tourism, and shipping.”

Let’s see.  In the 1930s, a substantial warming period caused a major shrinkage in the size of the lakes.  In the 2010s, a “tiny bump in air temperatures” caused the lakes to shrink anew.  In the 2020s a “warming climate” was producing “severe floods.”  This isn’t science.  This is sophistry of the genus Marxist.

Those of us with skin in the game have no use for it.  Over the past two years, perhaps a third of my lawn has crumbled into the lake.  Two large trees are hanging on by their roots.  I can hardly complain.  Many people around the lakes have already lost their homes.

I do have to plan, though.  Do I give in and build an unsightly and expensive wall?  Or do I assume that lake levels will regress to the norm?  For all that we invest in climate science, no one can give me the answer.  And this is about as simple as climate questions get.

What it is like to be a climate realist

Some people like the herd mentality, it gives them a feeling of fitting in, or belonging. It also saves them the trouble of having to think for themselves.

: the tendency of the people in a group to think and behave in ways that conform with others in the group rather than as individuals

Such is the case with many climate change proponents, who think they are morally anointed with holy oils because they are “saving the planet”.

Me, I’m all about facts and essential oils, like petroleum. Without it, not of you would be reading this article. Full article ..

Washington Examiner: Climate activists invest in property on beaches they say are disappearing