Image: Understanding the Caliphate: Between Romanticism and Cynicism

The only thing a global caliphate will secure is global war, genocide, hunger and a new black age.

Reformist Imam: The goal of the Islamist movement is to establish a caliphate

With the rise of radical Islam around the world and two new Muslim congresswomen seen as extremists, many Americans are beginning to ask questions about a global caliphate. One America’s Jack Posobiec sat down with a reformist Imam to learn more. Video: One America News Network 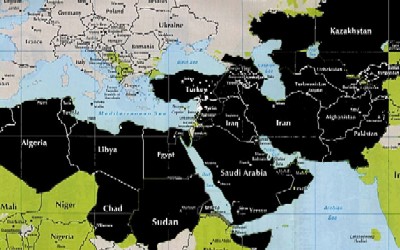 Barack Obama: Making The Arab World Safe for a Caliphate

Everybody assumes that Barack Obama’s announcement on Friday that we would be withdrawing the remainder of our troops from Iraq by year’s end is simply the result of calculated domestic political strategy aimed at his base.  While I am certain he will go to the well for support wherever he can find it, and has no problem using our foreign policy as a tool of his domestic political operation, I’ve begun to wonder whether this isn’t simply symptomatic of his continuing war against the West.  Barack Obama has demonstrated a strong affinity for the Muslim world, beginning particularly with his trip to Cairo early in his presidency.

There have been a string of policies that lend themselves to the notion that he’s clearing the way in the region for something else.  Glenn Beck has talked about it, but was summarily dismissed by the media as a conspiracy kook.  I realize that lately, in discussing these issues, I run the same risk, but the problem is that I see what I see and I know what I know, and these things are leading me to a single conclusion that I cannot rationalize away in any other fashion: Barack Obama is making the Arab world safe for the establishment of a caliphate.

He is systematically participating in the removal of the more secular rulers in the region.  The entire Arab Spring movement has been fomented and assisted by our State Department, under Obama, and the number of Muslim Brotherhood connections to the White House is disconcerting at the very least.  In Tunisia, Algeria, Egypt, and Libya, we have seen the beginnings of this overthrow of more secular leadership in these countries.  In each case, we were assured that this was a good thing, and that it heralded the start of democracy in the region.  Even Bill Kristol at the Weekly Standard was fooled, and he mocked Beck for the notion that this was anything that could lead to a wider transformation of the region.   Now we know better, as the events at Tahrir Square in Cairo can now be seen quite clearly in hindsight as the beginning of something ugly.

Also note that when the people of Iran began to rise up against Ahmedinejad, and were subsequently brutally oppressed, the Obama administration sat on its hands and did nothing.  This odd departure from what seems an otherwise consistent policy of overthrowing tyrants in the region stands out because it was the one movement we’ve seen that was actually motivated by a desire for greater democratization.  Those who were murdered by the brutal thugs in Iran actually sought greater political liberty and a more western notion of self-governance, and yet this is the one place where the Obama administration did nothing.

In Pakistan too, Obama is trying to undermine the government, and while there exists plenty of evidence that there is an element of enmity toward the US in that government, it is not those elements against which Obama is directing our national efforts.  Instead, he seems to be directing things against those in Pakistan who have helped to keep those elements in check.  In short, he seems to be going after the wrong people – from the point of view of US interests and by Western standards.  Now, they’ve openly expressed the proposition that we should have talks with the militants.

He is assisting in undermining Israel.  He is assisting in undermining  moderate rulers all over the Middle East.  He clearly doesn’t like the Emirates’ leadership, and he’s fomenting rebellion against them.  Even the Kingdom of Saudi Arabia is feeling the heat, and with each passing day, our more stable trading partners in the area are being undermined.  In Turkey, the face and nature of government has changed dramatically in favor of a more theocratic and radicalized position, all with the apparent blessings of the US.  Why?  That certainly won’t serve the interests of the American people.

In Iraq, a premature withdrawal only helps to guarantee that Iran’s influence in the post-Saddam Iraq will increase.  We may even see a move by the Iranians to capture control of Iraq, not by aggressive warfare as we saw in the 1980s, but by quiet insurrection as the Shi’a Muslims who dominate that country supplant the numerically inferior Sunnis.  With America out of Iraq, there would soon be no further justification to our presence in Kuwait, or Saudi Arabia, or in any of the Persian Gulf states.  This will leave the entire region open to easier consolidation under a single flag.

When viewed in this way, one must arrive at the question about motives.  It’s clear that this progression of events does not serve the interests of the United States or its people, and it will actually reverse the course of liberalization that we had hoped to see when Iraqis celebrated the purple ink that marked their first free elections.  Obama’s foreign policy now threatens to wipe all of that away, and what we will see in its place is the spread of theocratic governance dominated by Iran.  In effect, Obama’s “Arab Spring” may be well on its way to spreading the revolution that ousted the Shah and brought the Ayatollahs to power.

I believe this is the key to understanding who is Barack Obama, and what are his motives.  Obama is clearing the way for the establishment of a regional Caliphate that will stretch from the Mediterranean to the borders of India.  Even in Europe,the Islamic world has gained several footholds.  They are coming to dominate the populations of Central Europe, and everywhere you look, there is unrest and a complete lack of assimilation into the cultures of the host countries. You need only to examine Britain, France, and Germany to learn how well that is progressing.  The American people may one day soon awake to a world in which their influence has been devastated as their economy has been systematically wrecked, while a new or re-born Caliphate arises in the  Middle East, where Israel has been wiped from existence, and a purge of non-Muslims has been accomplished.  Even now, you can look at the plight of Coptic Christians who are fleeing Egypt for a clue as to what the future that Barack Obama is building will hold.

Destroying the political, economic, and military might of the United States is the only way this can be accomplished.  If you don’t realize that this very agenda is now being undertaken by Barack Obama, you haven’t been paying close enough attention.  We’re being robbed blind, we’re having the seeds of civil unrest sewn into the fabric of our own society, and the American people have been so demoralized that they cannot see the dangers looming in the wider forest, so consumed are they with the misery of their own trees.  This country is in mortal danger, and Barack Obama and those who operate under the umbrella of his influence have put us in this position.  We had thought it was merely because he was a misguided leftist, but the signs are right in front of our eyes that he’s something more terrible.  Make what you will of it, and damn me as a conspiracy kook, but the dangers are real, and the threat is growing, and Barack Obama stands as the key to all of it.