After putting together the article: Power Generation & Distribution For Dummies (or Why Intermittent Wind & Solar Will Never Work) and having read the two articles featuring Andrew Dessler, I searched for videos of him (I didn’t know about this activists before, nor do I actually care that much. But, no kids in the house gave me a little time to kill on this Saturday morning).

One thing is for sure, listening to dishonest activists is really, really entertaining. Also notice how easy it is for activists to lie. Water (vapor) doesn’t heat up the atmosphere, it only delays energy (heat) loss by “storing” energy (latent heat). And no, there’s still no such thing as “greenhouse gases” (in the real world).

CO2 is irrelevant for the temperature in the atmosphere simply because of convection – which also render the effect of radiation in the lower troposphere unmeasurable.

The CO2 level has been falling for millions of years (as the CO2 is being trapped in the earth’s crust or at the bottom of the sea etc.). As the atmosphere lose CO2 it also loses Oxygen, in sum – the atmosphere is getting thinner, smaller and lighter.

If this continue, the day-side of the earth will get warmer and the night-side will get colder (more of the earth’s surface will be as the warmer parts of the Sahara, very cold at night and very warm during the day.

This is the opposite effect of what the dishonest activists are telling us about, but think about it, look at Mars, look at the moon, it’s rather logical.

Another thing, when the atmosphere is getting thinner, lighter and smaller, it will lose some of its ability to contain water vapor, which will only add to the problem.

More CO2 in the atmosphere is actually a necessity, let’s see how long the “greens” corruption will keep that fact from the public.

BBC Alarmed By A Sunny Spring! 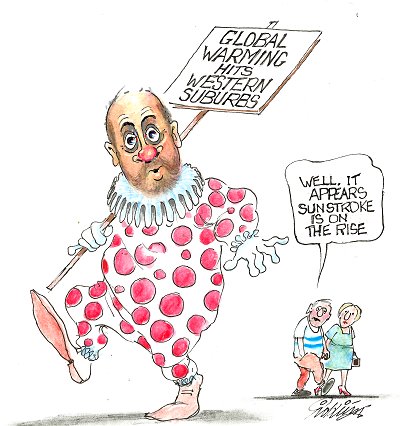