Donald Trump’s results from his physical last week are in, and with Hillary’s health being such a mystery, Americans want to be assured he is as healthy as he looks. Trump’s stamina on the campaign trail has never faltered, but is he fit to serve as president? Now, Trump’s results have revealed one important fact while, at the same time, Hillary’s doctor has lied again.

With Hillary covering up her failing health, Donald Trump smartly decided to have a complete physical. In total transparency, he will air the results on the Dr. Oz show. We now have those results and are thrilled to report that he is in great health especially for a man his age.

All of the test results were within normal range:

Trump’s cholesterol was 169, well below the traditional goal of 200 or less, with levels of unhealthy “bad” cholesterol at 94 and good cholesterol, which ferries fat out of the bloodstream, at 63. His blood pressure was 116/70, compared with normal scores of less than 120/80. The candidate’s prostate specific antigen level, a controversial test used to check for prostate cancer, was 0.15, with 4.0 or less considered normal. [viaBloomberg]

Trump’s doctor issued a letter, saying, “Trump, 70, takes a cholesterol-lowering drug and aspirin daily to reduce his heart risk, and doesn’t smoke or drink. He weighs 236 pounds and is six feet, three inches tall. In summary, Mr. Trump is in excellent physical health.” That says it all, and now there is only one candidate left, Trump, who is physically fit to assume the office of the president.

Now, contrast that to the mystery circus-like atmosphere that Hillary Clinton’s health has caused just in the last few days. If Hillary was any other candidate, the liberal press would be demanding she bow out, and now, we find out that her doctor is lying again.

Doctor Milton Wolf, who happens to be a third cousin to Barack Obama, issued this statement about Hillary’s health: “There’s no need for wild speculation or sensationalization. Hillary’s health problems are (1) knowable and (2) highly significant. This is my wheelhouse.” Milton is a radiologist, and they perform the tests like the one Hillary had — the CT scan. 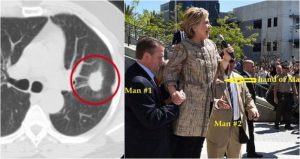 He went on to point out that Hillary’s doctor made quite a huge error on her recent statement about diagnosing Hillary with pneumonia. Milton said, “Hillary’s doctor just claimed Hillary had a perfect score on a test that doesn’t exist.”

What? Yep, Hillary’s doctor said she diagnosed Hillary with a non-contrast CTA, but as Dr. Milton explains, “A ‘CTA’ is a CT (or cat scan) angiogram. It always requires contrast. Always. It cannot be included in a ‘non-contrast CT scan.’”

A CT scan even with contrast is an odd choice anyway, since 99.9% of pneumonia cases are diagnosed with X-ray, but here’s what we know: Trump is extremely healthy especially for his age or for any age really, and Hillary is badly covering up that she is not fit in any way to be president. Let’s just hope those Americans who are on the fence will realize that Hillary has so many issues no sane person would vote for her, even if you are a Democrat.

Dr. Milton Wolf: Hillary’s Doctor Claimed Hillary Got a Perfect Score on TEST THAT DOES NOT EXIST