It’s even worse! The data used in the graph below: “Observed rural and urban data” – is FAKE! NASA/NOAA have adjusted the temperature by a total of over 3 C. According to unadjusted temperature measurements 1936 is still the warmest year on record, ref.: https://realclimatescience.com/

A diverse expert panel of global scientists finds blaming climate change mostly on greenhouse gas emissions was premature. Their findings contradict the UN IPCC’s conclusion, which the study shows, is grounded in narrow and incomplete data about the Sun’s total solar irradiance.

The paper by 23 experts in the fields of solar physics and of climate science from 14 different countries is published in the peer-reviewed journal Research in Astronomy and Astrophysics (RAA). The paper, which is the most comprehensive to date, carries out an analysis of the 16 most prominent published solar output datasets, including those used by the IPCC. 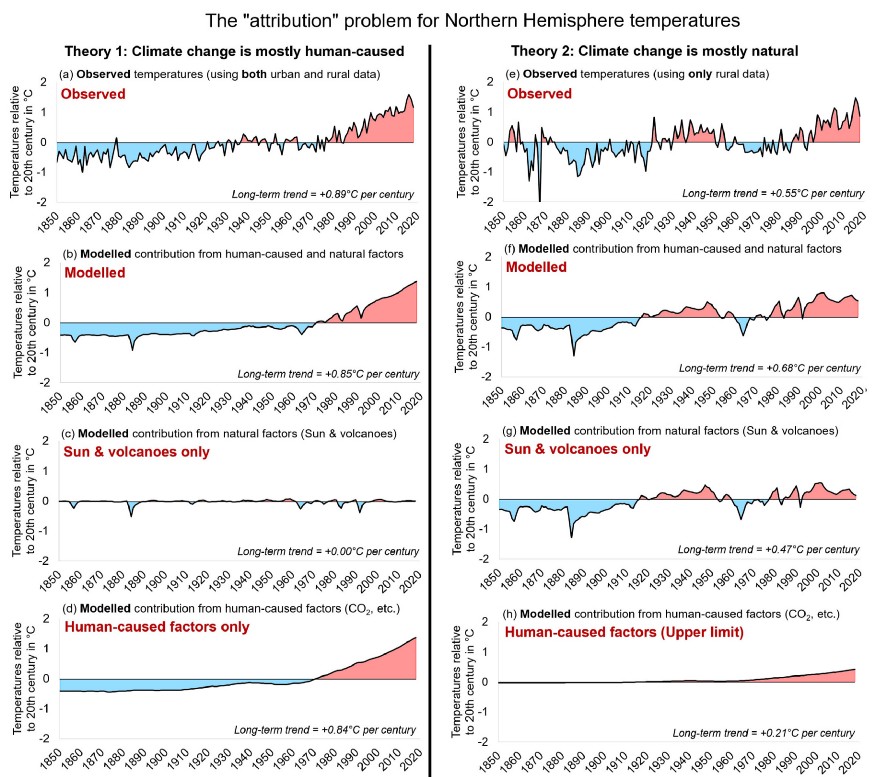 The study found that the scientists come to opposite conclusions about the causes of recent climate change depending on which datasets they consider. For instance, in the graphs above, the panels on the left lead to the conclusion that global temperature changes since the mid-19th century have been mostly due to human-caused emissions, especially carbon dioxide (CO2), i.e., the conclusion reached by the UN IPCC reports.

Warming due mostly to natural cycles

In contrast, the panels on the right lead to the exact opposite conclusion, i.e., that the global temperature changes since the mid-19th century have been mostly due to natural cycles, chiefly long-term changes in the energy emitted by the Sun.

Both sets of panels are based on published scientific data, but each uses different datasets and assumptions. On the left, it is assumed that the available temperature records are unaffected by the urban heat island problem, and so all stations are used, whether urban or rural. On the right, only rural stations are used. Meanwhile, on the left, solar output is modelled using the low variability dataset that has been chosen for the IPCC’s upcoming (2021/2022) 6th Assessment Reports. This implies zero contribution from natural factors to the long-term warming. On the right, solar output is modeled using a high variability dataset used by the team in charge of NASA’s ACRIM sun-monitoring satellites. This implies that most, if not all, of the long-term temperature changes are due to natural factors.

“The IPCC is mandated to find a consensus on the causes of climate change. I understand the political usefulness of having a consensus view in that it makes things easier for politicians. However, science doesn’t work by consensus. In fact, science thrives best when scientists are allowed to disagree with each other and to investigate the various reasons for disagreement, says Dr. Ronan Connolly, lead author of the study, at the Center for Environmental Research and Earth Sciences (CERES). “I fear that by effectively only considering the datasets and studies that support their chosen narrative, the IPCC have seriously hampered scientific progress into genuinely understanding the causes of recent and future climate change. I am particularly disturbed by their inability to satisfactorily explain the rural temperature trends.”

The 68 page review (18 figures, 2 tables and more than 500 references) explicitly avoided the IPCC’s consensus-driven approach in that the authors agreed to emphasize where dissenting scientific opinions exist as well as where there is scientific agreement. Indeed, each of the co-authors has different scientific opinions on many of the issues discussed, but they agreed for this paper to fairly present the competing arguments among the scientific community for each of these issues, and let the reader make up their own mind. Several co-authors spoke of how this process of objectively reviewing the pros and cons of competing scientific arguments for the paper has given them fresh ideas for their own future research. The authors also spoke of how the IPCC reports would have more scientific validity if the IPCC started to adopt this non-consensus driven approach.