In 1970, our top scientists warned that the oceans would be dead, and America would run out of food and water before 1980. Still alive in 1992, the scientists granted Earth a reprieve and warned that we only had a decade or so.

No more than one or a few decades remain …

Fred Singer called them out on their BS in 1992.

A now the scientists have granted Earth another reprieve and are back with their “second warning” saying exactly the same BS they were saying in 1970.

Global climate change sits atop the new letter’s list of planetary threats. Global average temperatures have risen by more than half a degree Celsius since 1992

Other than natural variability from oceanic and volcanic cycles, there is no legitimate reason to believe Earth’s temperature has changed at all since 1992.

With a La Nina developing and lots of cold water in the Southern Hemisphere, troposphere temperatures should start dropping soon.

As someone who grew up in the scientific community, I understand that many scientists consider themselves to be gods who control fate and destiny – when in fact they are simply civil servants seeking a secure source of funding. The problem is that many of them actually believe their own delusions.

Serial failed futurist Paul Ehrlich has warned that Australia will become a third world country, if we Australians don’t abandon one of our main sources of national income.

According to The Guardian;

Australia is “working to become a third-world country” through its economic dependence on mining natural resources for export and reliance on coalmining, according to doomsday ecologist Paul Ehrlich.

Ehrlich made the prediction on the ABC’s Q&A program on Monday night, after dismissing the views of other panellists on the question of whether Australia was overpopulated as “mostly nonsense, unfortunately,” and before praising the economic theories of electronics retailer Dick Smith.

“Talk to your ecologist,” Ehrlich said. “You are destroying your life support systems here. You are working at it really hard. You are also working to become a third-world country, because your specialisation of course is to take your raw materials, like your coal, which will destroy the world of your grandchildren and great-grandchildren, and ship of as much of it unprocessed as you possibly can out to the rest of the world.”

Ehrlich told host Tony Jones, who seemed to be struggling to manage the octogenarian academic, that his prediction of a 90% chance civilisation would collapse in 50 years was based on a “gut feeling”, and freely admitted that a number of his predictions, such as the prediction the United Kingdom would be a small group of impoverished islands occupied by 70 million hungry people by the year 2000, hadn’t quite borne out.

Its good that Ehrlich is researching whether the rumbling of his digestive tract is a more reliable predictor of future events, than whatever he used to do. In fact, I must commend Ehrlich on choosing to study his own gut, rather than the entrails of slaughtered animals, to produce his forecasts – Ehrlich’s method seems a lot tidier and less wasteful than the ancient Roman method of fortune telling, and will in all likelihood produce predictions which are at least as reliable as an IPCC climate projection.

While the alarmists wail over 400PPM of CO2, and push doom and gloom crop failure scenarios, in the real world where people risk money and livelihood, the news is far, far, better. 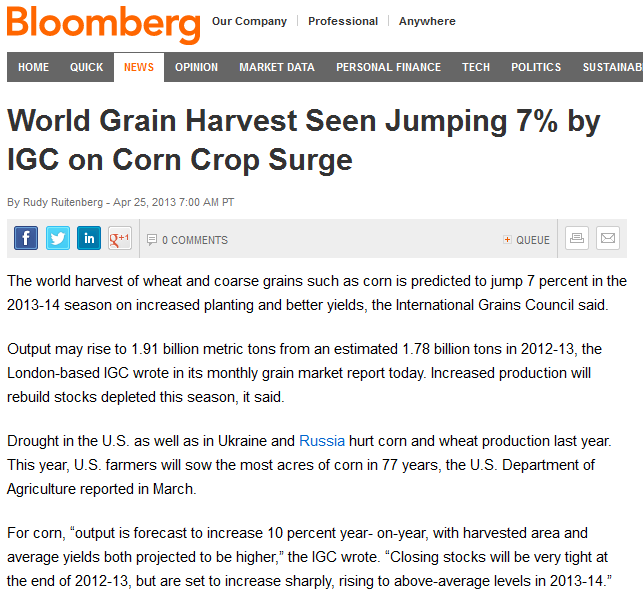 Of course Paul Ehrlich thinks the world will end (again).

by Paul Ehrlich
It’s been three months since Anne and I summarized our views on this topic for the Royal Society, and we’ve been pleased that it has generated a fair amount of discussion and particularly, invitations to share our take on the future in various forum in the U.S., Australia, and New Zealand.  So far the paper has not elicited any significant attacks, save one “rebuttal” based on climate denial that was rejected by a journal.  But it has also not yet generated some of the discussion we might have hoped for, especially on key issues such as how to buffer the global agricultural system against global change so as to retain a real possibility of at least maintaining today’s nutritional situation and steps that need to be taken to increase human security against vast epidemics (such as that which now may be threatened by the H7N9 “bird flu” virus).

I’d love to see him explain how the world agricultural system will collapse in the face of gains like this, it should be entertaining.

Every university has their own nutty professor. As long as people recognize that Paul Ehrlich is just that, and that none of his gloom and doom scenarios have come true, we’ll all be fine.

Ehrlich is the poster child for why tenure shouldn’t be a permanent thing, but one that you have to be reviewed at some interval to keep.