Venezuela’s President Nicolas Maduro speaks during a meeting in a hospital for budget approval for its reconstruction in La Guaira, Venezuela April 6, 2018. Miraflores Palace/Handout via REUTERS

The Venezuelan government arrested two Chevron executives as the socialist country tries to crackdown on alleged graft in the oil industry, according to a report Wednesday from Reuters.

“Chevron Global Technology Services Company is aware that two of its Venezuelan-based employees have been arrested by local authorities,” Chevron said in a statement Tuesday, referring to the government’s move Monday to arrest chemical engineer Carlos Algarra and Rene Vasquez, a procurement adviser in the country.

“We have contacted the local authorities to understand the basis of the detention and to ensure the safety and wellbeing of these employees. Our legal team is evaluating the situation and working towards the timely release of these employees,” Chevron added.

They were arrested after arguing with state-run company PDVSA over procurement agreements. Oil industry analysts claim the arrests should be a warning sign to companies that relations with Venezuela’s government could go sour during extreme economic upheaval.

“Oil industry companies would do well to be cautious and stop assuming that good relations with PDVSA can last forever due to a common interest in pumping oil,” Raul Gallegos, associate director with the consultancy Control Risks, told Reuters shortly after the arrests were confirmed.

“The level of corruption in PDVSA, especially under a military administration, can and will trump production logic,” he added. The economic turmoil comes as hyperinflation continues racking the country’s currency.

Each of 20 bolivar bills, according to analysts, is worth about $0.0001 at the current exchange rate, requiring Venezuelans to have 100 of the bills to even have a penny. Galloping inflation has essentially robbed half the country, according to Francisco Toro, an executive editor of the Caracas Chronicles.

“Hyperinflation is disorienting. Five or six years ago, the 500 bolivars on the floor would’ve bought you a meal for two with wine at the best restaurant in Caracas,” Toro wrote in a January editorial for The Washington Post.

“As late as early last year, they would’ve bought you at least a cup of coffee. At the end of 2016, they still bought you a cup of café con leche, at least. Today, they buy you essentially nothing … well, except for 132 gallons of the world’s most extravagantly subsidized gasoline,” he added.

Under military rule, Venezuela oil workers quit in a stampede 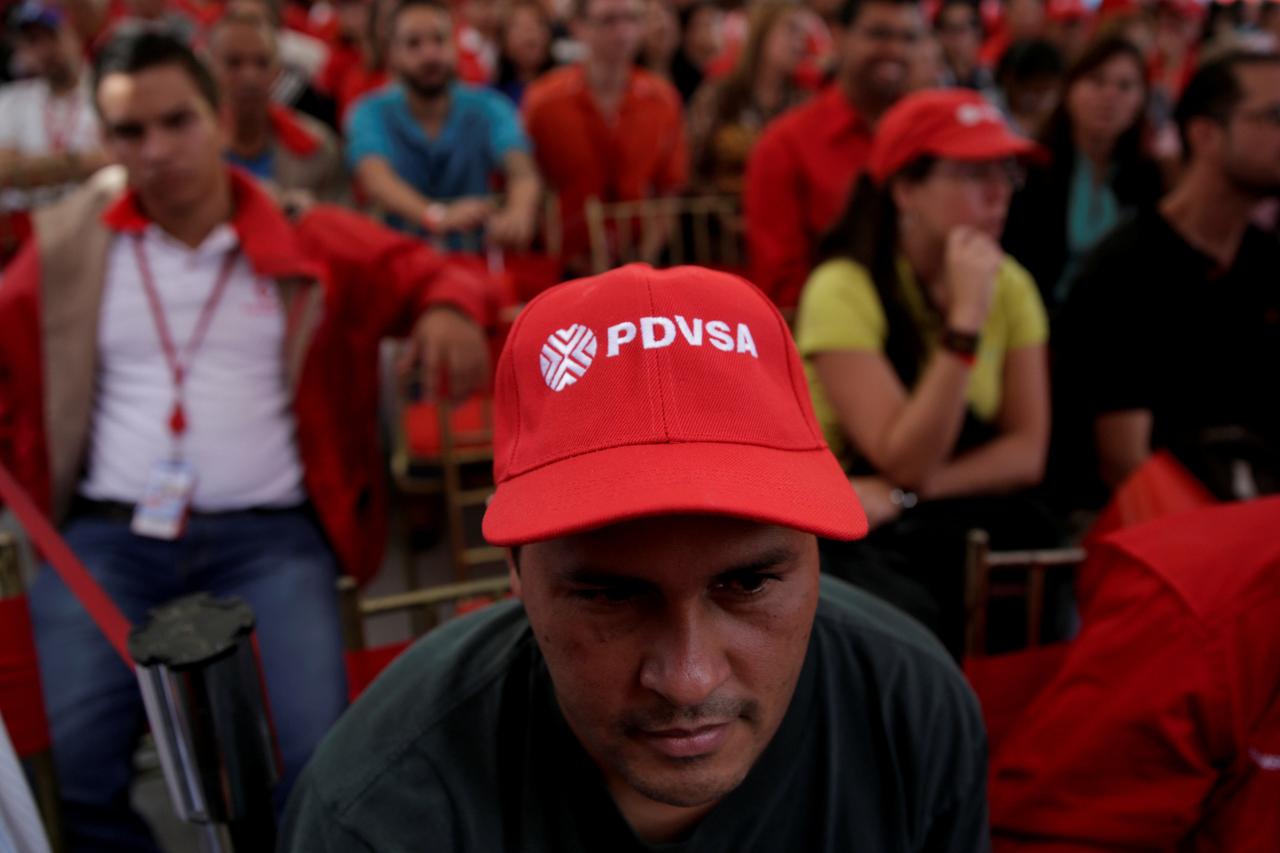 FILE PHOTO: A man wears a cap with the logo of PDVSA as he attends the swear-in ceremony of the new board of directors of Venezuelan state oil company PDVSA in Caracas, Venezuela January 31, 2017. REUTERS/Marco Bello/File Photo

Flanked by other trucks carrying security guards, Quevedo passed a handful of workers waiting by an oil well cluster. They wanted a word with the OPEC nation’s oil minister and president of its state-run oil firm, PDVSA [PDVSA.UL], about the sorry state of the company.

Quevedo and his caravan drove on by.

“He didn’t get out to ask workers about what is going on,” said Jesus Tabata, a union leader who works on a rig in the oil-rich Orinoco Belt. “That way it’s easier to keep saying everything is fine – and at the same time keeping us on like slaves on miserable wages.”

What’s going on is that thousands of oil workers are fleeing the state-run oil firm under the watch of its new military commander, who has quickly alienated the firm’s embattled upper echelon and its rank-and-file, according to union leaders, a half-dozen current PDVSA workers, a dozen former PDVSA workers and a half-dozen executives at foreign companies operating in Venezuela.

Some PDVSA offices now have lines outside with dozens of workers waiting to quit. In at least one administrative office in Zulia state, human resources staff quit processing out the quitters, hanging a sign, “we do not accept resignations,” an oil worker there told Reuters.

Official workforce statistics have become a closely guarded secret, but a dozen sources told Reuters that many thousands of workers had quit so far this year – an acceleration of an already troubling outflow last year.

About 25,000 workers resigned between the start of January 2017 and the end of January 2018, said union leader and government critic Ivan Freites, citing internal company data. That figure comes out of a workforce last officially reported by PDVSA at 146,000 in 2016.

Resignations appear to have increased sharply this year, said Freites, a prominent union leader at Venezuela’s major refineries in the northern Paraguana peninsula.

Many of those leaving now are engineers, managers, or lawyers – high-level professionals that are almost impossible to replace amid Venezuela’s economic meltdown, the PDVSA workers and foreign executives told Reuters.

PDVSA and the Oil Ministry did not respond to repeated requests for comment. PDVSA board member and pro-government union representative Wills Rangel acknowledged the flight of talent is a serious problem.

“The massive resignations are worrying,” Rangel said in an interview. “In refinery operations, many have left.”

The pace of departures has quickened with the rapid deterioration of PDVSA’s operations and finances – radiating pain through the OPEC nation’s oil-based economy, now beset with food shortages and hyperinflation.