Lou Dobbs has a few things to say about the leftwing media and the leftist organizations that “are out in force trying to take down Donald Trump.” He comments on the recent effort, a tweet by the United Nations to motivate “eight million Americans abroad to ‘end Trump.’ That tweet was scrubbed some twenty minutes later with the agency saying ‘it’s investigating the cause,’ which means by the way the agency didn’t have the guts to admit who in the agency sent it out.”

Dobbs continues, “But that’s not the only leftwing organization taking aim at Trump, of course. One of the usual sources, the New York Times today actually declared the state of Ohio to no longer be a bellwether battleground state, claiming it’s fading on the electoral map after deeming it all important just back in July. But Trump wasn’t leading then and he is now.”

“No candidate has ever won the White House without Ohio since 1960 and Trump is leading in the state according to the Real Clear Politics average and has for some time.” Dobbs points out that Trump has now made the point that the leftwing media will pay a price for aligning themselves with Clinton in the campaign.

Trump noted that the USA Today has now sided with Clinton, tweeting, “The people are really smart in cancelling subscriptions to the Dallas and Arizona papers and now USA Today will lose readers. The people get it!”

Dobbs says, “The leftwing media doesn’t seem to understand their editorializing is just purely wasted energy, that their audience is not  only not paying attention to them, but an increasing number of them are dropping their subscriptions and no longer paying for the left’s elitist, establishment, globalist view of our country, our politics and indeed the globe.”

“In other words, says Dobbs, “the left has quite inadvertently proved that free enterprise markets work and that if unfettered by authoritarian, so-called political correctness, the marketplace of ideas in this country will work for all of us. And that’s what Donald Trump is all about, right?” 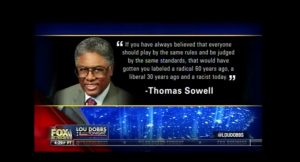