The “rich” countries implementing all kinds of “Carbon-Taxes” using the excuse of (Man Made) Global Warming which, of course the “poor” countries supports – thinking they will get money. Imagine how surprised they will get when they discover that the “Carbon-Taxation” in the devloped world wasn’t really to combat (Man Made) Global Warming (which still doesn’t exsist) and that hey won’t get any money. 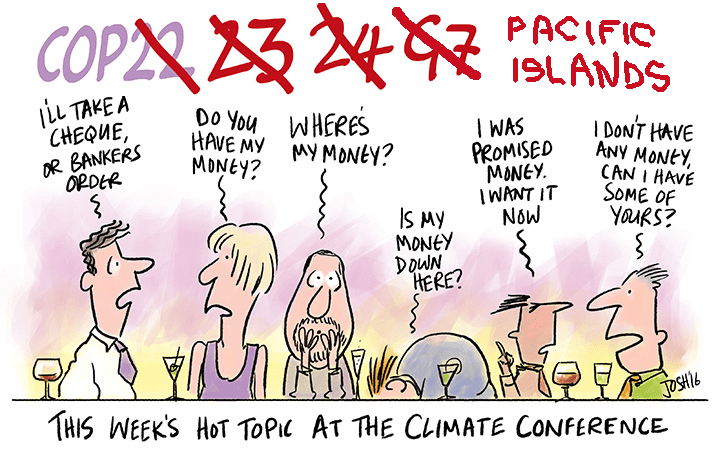 Unhappy Pacific Islanders are vigorously demanding more climate action, and they want to know when the “support” will arrive.

“We need resources. We need support,” Marshall Islands President Hilda Heine told NPR’s Morning Edition. “We need everyone on board, and not everyone is on board at this point.”

Micronesian President David W. Panuelo was upbeat, however, after the events in New York. “We felt we were heard by the global community,” he said in a phone interview.

He said he is particularly encouraged by the attention paid by U.N. Secretary-General António Guterres. He also pointed a resolution passed in August to enhance U.N. cooperation with a group called the Pacific Islands Forum, which aims to “build resilience to extreme weather in the region.”

“Guterres is very genuine about his concern,” Panuelo said.

He wishes the U.S., which he called his nation’s closest ally, would return to the Paris agreement, he said.

If you want to make Pacific Islanders smile, all the USA has to do is recommit to the Paris Agreement, agree to the dictates of the UN Secretary General, and start shovelling taxpayer’s money into the hundred billion per annum climate “support” fund.