ANTHROPOGENIC “climate change”, and the control of carbon dioxide (energy) has deep roots in a radical, yet gravely misguided campaign to reduce the world’s population.

GLOBAL warming aka climate change has little to do with the “environment” or “saving the planet”. Rather, its roots lie in a misanthropic agenda engineered by the environmental movement in the mid 1970’s, who realised that doing something about “global warming” would play to quite a number of the Lefts social agendas.

THE goal was advanced, most notably, by The Club Of Rome (Environmental consultants to the UN) – a group of mainly European scientists and academics, who used computer modelling to warn that the world would run out of finite resources if population growth were left unchecked.

“In searching for a new enemy to unite us, we came up with the idea that .. the threat of global warming.. would fit the bill.. the real enemy, then, is humanity itself.” – Club Of Rome

NOT surprisingly, the study predicted a dire future for mankind unless we ‘act now’: 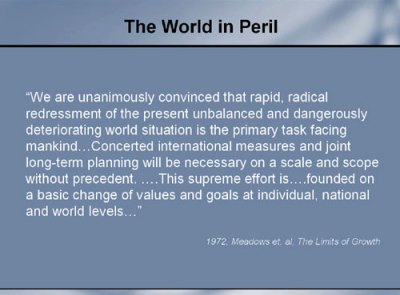 AROUND the same time, influential anthropologist and president of the American Medical Association for the Advancement of Science (AAAS), Margaret Mead, gathered together like-minded anti-population hoaxsters at her 1975, North Carolina conference, “The Atmosphere: Endangered and Endangering”. Mead’s star recruits were climate scare artist Stephen Schneider, population-freak George Woodwell and former AAAS head, John Holdren (Barack Obama’s Science and Technology Czar). All three of them disciples of Malthusian catastrophist Paul Ehrlich, author of the “The Population Bomb”.

THE conference concluded that human-produced carbon dioxide would fry the planet, melt the ice caps, and destroy human life. The idea being to sow enough fear of man-made climate change to force global cutbacks in industrial activity and halt Third World development.

“No matter if the science of global warming is all phony…
climate change provides the greatest opportunity to
bring about justice and equality in the world.”
– Christine Stewart,
former Canadian Minister of the Environment

“In Searching For A New Enemy To Unite Us, We Came Up With The Threat Of Global Warming” – Club of Rome,
premier environmental think-tank,
consultants to the United Nations

The “zero-emissions” zealots want to force us backwards down the energy ladder to the days of human, animal and solar power. They oppose the main thing that sets us apart from all other species – the use of fire from explosives, coal, oil, gas or nuclear power.

They have yet to explain how our massive fleet of planes, trains, tractors, harvesters, trucks, road trains, container-ships and submarines will be powered and lubricated by windmills, treadmills, windlasses, solar energy, distilled whiskey and water wheels.

Western nations, driven by a global agenda of climate alarmism, are destroying their profitable industries with carbon taxes; and their promotion of expensive, intermittent green energy is pushing us back down the energy ladder; and our competitors in Asia are climbing the energy ladder as quickly as they can. At the same time, the enormous waste of public money on government promotion of the climate industry has created a global fiscal mess.

Unless reversed, this wasteful de-energising policy will drive much of the world’s population back to the poverty and famines which often prevailed in the past. Some see the inevitable de-population this would cause as a desirable goal.

READ the whole post here: Falling Down the Energy Ladder | US Issues

Electricity prices declined for forty years. Obviously that had to stop.

Today all the hard-won masterful efficiency gains of the fifties, sixties and seventies have effectively been reversed in full.

For most of the 20th Century the Australian grid was hotch potch of separate state grids and mini grids. (South Australia was only connected in 1990). In 1998 the NEM (National Energy Market) began, a feat that finally made bad management possible on a large scale. Though after decades of efficiency gains, Australians would have to wait years to see new higher “world leading” prices. For the first years of the NEM prices stayed around $30/MWh.

But sooner or later  a national system is a sitting duck for one small mind to come along and truly muck things up.

Thanks to a Dr Michael Crawford who did the original, excellent graph.