President-elect Donald Trump is the first of his kind; a businessman with no political experience, elected as a complete outsider. As such, the political establishment is having a difficult time adjusting to his situation, for which there is no established precedent.

Trump’s credibility and electability stemmed in large part from his expansive business empire; he is reported as holding an executive position at more than 500 companies, and his assets are valued at $3.7 billion, according to Forbes. The President-elect’s real estate, management and branding empire has a claimed interest in at least 18 countries and territories, including China, Saudi Arabia, Brazil and Israel.

“There’s no one who has gone from business to politics directly, who’s a man of great wealth and great interrelated businesses, like Donald Trump. It’s unprecedented. And so all of a sudden, the question becomes, well how do we know if he is working in the best interest of the country?” Richard Roth, founding partner at The Roth Law Firm, told FOXBusiness.com.

Critics who perceive Trump’s brand as a potential distraction from his mandate to put America first are asking the same question.

Though not required under the Constitution, but established as precedent by presidents before him, there have been calls for the President-elect to divest himself from his business empire and to liquidate his assets. Senator Elizabeth Warren (D-MA) and Senator Ben Cardin (D-MD) have even gone so far as to effort a piece of legislation that would require Trump to divest, or face impeachment.

However, in Trump’s case, dumping assets may be easier said than done. It would be nearly impossible for Trump to divest himself from his brand, Howard Schweitzer, former senior vice president, general counsel, and chief ethics officer at the Export-Import Bank of the United States, told FOXBusiness.com.

“It’s more about appearances than it is about legality. And I think when you strip everything away, his name – you’re talking about somebody whose name is on buildings. And there’s nothing that can be done from a structural point of view like you’d have with a more typical ethics scenario in government… you can’t make him ‘blind’ to his assets. It’s not possible.”

Roth agrees this is a game of appearances, and Trump must take careful steps to try to separate himself from his companies.

The Democrats’ proposed bill would require Trump to unload his assets into a blind trust, meaning he would give up control and would be unaware of how the assets were being managed. In Trump’s case, his children would be running his businesses; a scenario which Roth believes is Trump’s best bet.

“Every decision he makes is going to be questioned whether he [divests his assets into a blind trust] or not. But after he does it he can just say ‘I don’t know what else I can do. I have no control, I don’t know what’s going on in underlying management…I’ve as best as possible…removed myself so it doesn’t affect my decision making.’”

Trump himself appears to be having a difficult time figuring out how to detach himself from his vast business empire. He was supposed to reveal the plans for his businesses by mid-December, but the announcement has been postponed until an unspecified date in January.

“I think they’re struggling with what the best way is to set all this up…I don’t see it as a red flag,” Schweitzer, who was also the COO of the Troubled Asset Relief Program (TARP), said.

Those plans, however, could provide critics with the ammunition they are searching for. Trump’s children have played a pivotal role in helping the businessman preside over his vast holdings, and Trump has recently said sons Donald Jr. and Eric will succeed him in leading his namesake companies. Yet, they have also been tapped to aid his transition team, and many are concerned familial involvement could emerge as another source of potential conflict for the incoming administration.

Trump is reportedly looking to exploit an “exception” in the federal anti-nepotism law in order to find roles for his daughter Ivanka and son-in-law Jared Kushner on his staff, according to Kellyanne Conway, his top political advisor.

While it is evident Trump trusts his family’s advice above all else, perhaps this is one area he might consider compromising to quell the appearance of conflicts-of-interest, Schweitzer said.

“Everybody in government has people outside of government that they call, that they bounce things off of, and it’s pretty clear [Trump’s] family is front and center in terms of bouncing ideas off them and involvement in his professional life,” he said. “I think part of addressing the conflict issue is going to be not involving his kids in the business of government.”

Roth on the other hand said as long as Trump is making decisions based on what is best for the country, and not toward nepotistic ends, there is no issue with Kushner or Ivanka aiding the incoming President.

Trump’s transition period is an easy time for critics to find fresh angles from which to dissect his every move, but once he steps into office, Schweitzer believes people will turn their attention to what really matters: the issues. 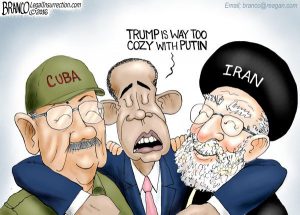