By Andy May – WUWT

Dr. Martin Capages has written an excellent new book entitled Why the Green New Deal is a Bad Deal for America. He very effectively deconstructs the “Green New Deal.” He kindly asked me to write the Foreward for the book, so I am posting a slightly revised version here. 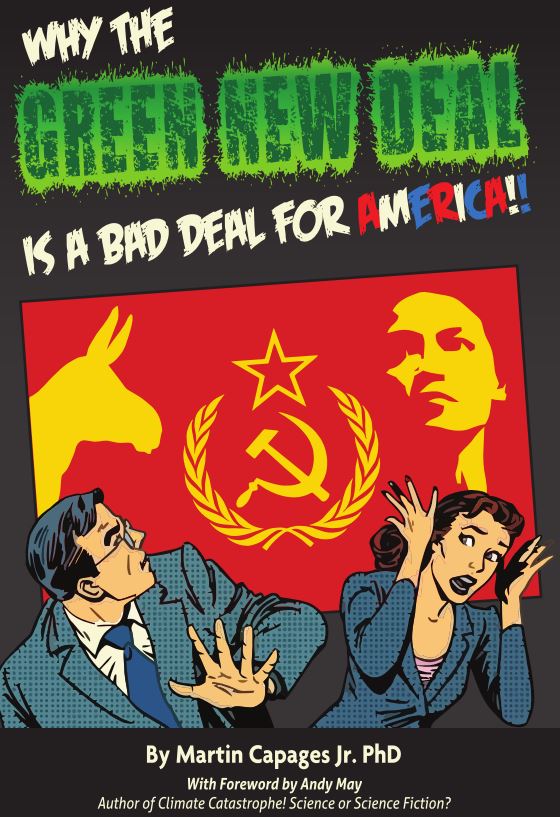 Alexandria Ocasio-Cortez is only the latest, in a long line of politicians, to use climate change as an excuse for world government and global control of production, distribution and exchange of goods and services, aka socialism. The global warming (or climate change, if you prefer) scare has been inexorably tied to socialism since it was conceived in the late 1980s by Maurice Strong (see the details of what Strong did in Christopher Booker’s article on him in the 5 December 2015 issue of The Telegraph, link). In short, he became the founding director of the UN Environmental Programme (UNEP) and later, in 1992, he created the UN Framework Convention on Climate Change.

The UN Framework Convention on Climate Change has dominated (some would say “dictated”) the global climate change agenda ever since. In 2015, the then Executive Secretary of the body, Christiana Figueres, said this:

“This is the first time in the history of mankind that we are setting ourselves the task of intentionally, within a defined period of time to change the economic development model that has been reigning for at least 150 years, since the Industrial Revolution.” (link)

Christine Stewart, the Canadian Minister of the Environment said to the editors and reporters of the Calgary Herald in 1998:

“No matter if the science of global warming is all phony … climate change [provides] the greatest opportunity to bring about justice and equality in the world.” (link)

However, whether climate change is mostly natural or mostly man-made, is less important than the rate of the change and whether it is dangerous. The rate of global warming over the past 150 years is less than one degree Celsius (1.8°F) per 100 years, this is not alarming and, if anything, it appears to be slowing down in recent decades (Fyfe, et al., 2016) and Javier (2019). Further, our oceans, which cover 70% of the Earth’s surface, provide an upper limit on the Earth’s average surface temperature of around 30 degrees C according to studies by MIT atmospheric physicists Newell and Dopplick(Newell & Dopplick, 1979).

So, a climate catastrophe is not headed our way anytime in the next few hundred years, we do have plenty of time to study the matter. According to a study of the Earth’s climate history by Christopher Scotese and the Paleomap Project, at the University of Texas (Scotese, 2015), the average global surface temperature of the Earth over the past 500 million years is about 20 degrees C (68°F). This is over five degrees warmer (9°F) than today, thus we are in an unusually cold period in the Earth’s history. In the past, the Earth’s average surface temperature has been as warm as 28 degrees C (82°F), during these times dinosaurs roamed over the continent of Antarctica and palm trees grew on the North Slope of Alaska, while equatorial temperatures remained about the same as today.

Characterizing the current warming as an urgent and impending crisis is silly considering the scientific evidence we have today. There is no need to remove national boundaries, form a global government and abandon capitalism to “save the world.” Climate changes, we all accept this, perhaps it is mostly man-made, perhaps it is mostly natural, we don’t know. What we do know is that many communities may be affected by climate change. Sea level is rising, the best long-term estimates are that it is rising between 1.8 and 3 millimeters per year. This is not a large rate, perhaps seven inches to a foot in 100 years, much less than the daily tides. But, if it causes problems, seawalls can be built, people can move from dangerous areas or elevate their houses, it is a problem that can be dealt with locally, as it has been for thousands of years. Why use a global solution?

With fossil fuels or nuclear power, which the climate change alarmists want to eliminate, we can cool or heat our buildings if a community gets too cold or too hot. If we get more rain, we can improve our drainage or move out of flood plains. If it gets too dry, we can drill wells for water or move water via aqueducts. The point is, each community needs to deal with its own problems. Climate change is not a problem that must be dealt with globally, the people affected and closest to the problem will deal with it in the most effective and efficient manner, as they always have. You don’t swat flies with atomic bombs.

So, consider Dr. Capages arguments carefully. Capitalism built our current affluent society and lifted billions of people out of abject poverty. Do we really need to throw all of this away and turn all our businesses and property rights over to a world government to fight a possible climate change problem that is hundreds of years away, if it exists at all?

You can order Dr. Capages book on Amazon here.

And when one Democrat gets unhinged and draws attention, “.. there might be a real voter there ..” there comes the next. This time no other than “Spartacus” 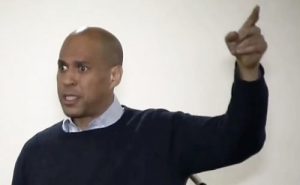 “Our planet is in peril, and we need to be bold,” Booker said at a Friday campaign event in Iowa. There are a lot of people who are critical of the deal. Critics claim “it’s too impractical, and it’s too expensive.”

“And when the planet has been in peril in the past, who came forward to save Earth … from the scourge of Nazis and totalitarian regimes?” Booker asked rhetorically. “We came forward.”

“We came forward with the Marshal Plan,” he added, referring to a U.S. program concocted during the 1940s to rebuild parts of German and other European countries bombed out during World War II.

The GND, which was introduced Thursday by Rep. Alexandria Ocasio-Cortez, calls for a “10-year national mobilizations” toward a series of goals aimed at fighting global warming. A separate fact sheet published online claims the plan would “mobilize every aspect of American society on a scale not seen since World War 2.”

Ocasio-Cortez’s original concept received support from Booker and other potential presidential candidates. The updated version, however, which was rolled out Thursday morning, got only tepid support from Speaker of the House Nancy Pelosi, who called the idea a “green dream” Wednesday.