A gender neutral sign is posted outside a bathroom at Oval park Grill on May 11, 2016 in Durham, North Carolina. The debate over transgenderism is spreading nationwide, particularly when it comes to transition surgery for young people

However, legislative initiatives in a dozen other states died away while the Arkansas law was immediately challenged in court, preventing it from going into force in July 2021.

Since then, Alabama and Arizona have advanced and enacted their own copies of the Arkansas law, while California changed course 180 degrees to oppose the bans. California became the first “sanctuary” state in the US last month, admitting teenagers from other states seeking puberty blockers, transgender hormones, and surgical procedures. 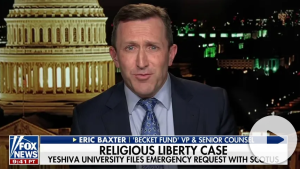 A California childcare teacher sued her former employer last week after she was allegedly terminated and mistreated because of her religious objection to reading books to children featuring same-sex couples.

And now, as the Save Adolescents From Experimentation (SAFE) Act trial in Little Rock gets underway on October 17, it is being intently monitored from all angles.

Depending on the outcome, policymakers and activists around the country will decide how to proceed in the developing debate over medical intervention for adolescents who identify as transgender.

The ACLU contends that the SAFE Act unconstitutionally denies “medically necessary” treatments for youths suffering from gender dysphoria, which is persistent distress about one’s gender.

At the time of the lawsuit’s filing in May 2021, the four gender-dysphoric youngsters ranged in age from 9 to 16; the ACLU is also representing two medical professionals who offer “gender-affirming care.”

Parents of the children reported witnessing noticeable improvements in behavior and decreased anxiety following counseling and, in some cases, hormone therapies.

The parents are concerned about what might occur to their kids if the law went into effect and forced a quick end to the treatment.

Leslie Rutledge, the attorney general of Arkansas, argues that because of their still-developing bodies, children must be protected against “experimental” procedures. She and other SAFE Act proponents claim that the medicines’ long-term effects are still unknown. 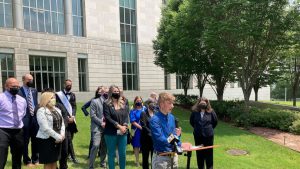 The nation’s first trial over a state’s ban on gender-confirming care for children begins in Arkansas this week, the latest fight over restrictions on transgender youth championed by Republican leaders and widely condemned by medical experts.

The case serves as the nation’s first test of the constitutionality of this type of law, Danielle Weatherby, an associate professor at the University of Arkansas School of Law, told The Epoch Times.

Regardless of which way the judge rules, “this is just the beginning of a wild ride,” Weatherby said.

She anticipates other appeals and legislative measures in several states will follow.

Legally speaking, Moody’s ruling will only be regarded as a precedent in the Eighth Circuit, an area of federal courts made up of six states, including Arkansas.

At least two states in the Eighth Circuit, Missouri and Iowa, had introduced legislation similar to the SAFE Act. (Nebraska, North Dakota, and South Dakota make up the remaining states.)

Weatherby stated that no state in the Eighth Circuit would be allowed to pass one of these laws if the ACLU wins and Moody invalidates the SAFE Act.

RELATED: What life is like for trans youth in Texas after Abbott’s calls to investigate gender-affirming care 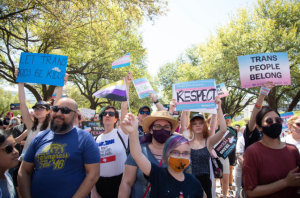 It’s been eight months since Gov. Greg Abbott directed the Texas Department of Family and Protective Services to investigate the families of trans youth for providing gender-affirming care. Since then, some families have left the state. Those that stayed have weathered anxiety and the dizzying back-and-forth of legal battles to determine whether investigations will stop.

Moody was needed to decide if there was a “reasonable possibility” that the ACLU would win its legal battle before he agreed to temporarily stop Arkansas from adopting the SAFE Act.

Arkansas requested that Moody’s decision be overturned, but the U.S. The preliminary injunction was maintained by the Eighth Circuit Court of Appeals.

As a result, it appears that both Moody’s court and the appeals court hinted that they were inclined to support the ACLU’s arguments in the case.

But Moody is expected to have five long days of testimony to mull over, leaving open the possibility that he still may uphold the SAFE Act.

Because she knows several transgender people and their families, Weatherby said she is personally invested in the case’s conclusion.

“I know that firsthand, having worked with transgender children, they do not make this decision lightly,” to undergo gender-altering medical procedures, she said. “And I think that gets lost in the conversation.”

She is also aware of the controversy surrounding the efficacy and safety of “gender-affirming care.” According to her, each family must make that choice after consulting with their doctor, and they should “do the best we can with the knowledge we have, because these kids are suffering from particular dread, worry, and despair,” she said.

One unusual defense of the SAFE Act makes use of a British court decision rather than an American one.

“When there’s no precedent, we look elsewhere,” Weatherby said.

The SAFE Act, according to attorney general Rutledge, “responds to widespread, rising international concerns” regarding the use of body-altering medical procedures on the still-developing bodies of kids.

She mentioned that the high court in the United Kingdom “decided that youngsters presumably cannot ever grasp the permanent effects of using puberty-blocking medications as a transition process” a few months before the SAFE Act was adopted.

The UK court also rejected claims that the effects of puberty blockers are “completely reversible” if the patient quits taking the drugs.

The court concluded instead that “misplaced development and experience, during adolescence, can never completely be regained or “reversed”.”

The ACLU claimed that “Puberty-delaying treatment is reversible” in its initial case against Arkansas, yet later on the same page, the ACLU cites professional standards that describe the “partly irreversible effects” of those prescriptions.

Officials in Arkansas have stated that these disagreements arise because the research is uncertain.