Recently, Tennessee Republican Sen. Lamar Alexander took to the floor of the United States Senate to discuss an important issue: a proposed wind farm that would be located in Cumberland County if approved.

He was joined in opposition by U.S. Rep. Diane Black, also a Tennessee Republican, who wrote to several federal agencies voicing her concerns. You can find Alexander’s presentation and Black’s letters on our website at www.tnwf.org.

So why are they so vocal in their opposition to a seemingly well-intended project? “Clean energy” like wind power must be a positive thing for the environment, right? And it must therefore also be good for wildlife, yes?

The truth is that the impacts of wind farms are significant, and they are not positive for Tennessee’s environment and wildlife. If you look at the 23 wind turbines proposed for Cumberland County, each 600 feet tall — three times the height of Neyland Stadium, with blades as long as a football field — and plainly visible from Interstate 40 and the surrounding area, you begin to understand the scope.

A sufficient amount of wind to run the turbines would be available only 18 percent of the time, and the Tennessee Valley Authority says it doesn’t even need the electricity the wind farm would produce.

From an efficiency standpoint, it costs $52 an hour to subsidize wind power production, versus 84 cents for hydroelectric power — and the project will produce only a fraction of what is generated by the Watts Bar Dam nearby.

The Crab Orchard Wind Farm as proposed would cover 1,800 acres, not including the large transmission lines to service it — a change in habitat requiring clear cuts and large applications of herbicide to maintain.

It doesn’t make financial sense, and it would alter the natural landscape forever. All of that wind through all of those turbines also produces a lot of unpleasant noise.

But what about the impact on wildlife?

Each year, wind farms are responsible for the deaths of more than 1.4 million birds and bats — in just two months at the Backbone Mountain wind farm in West Virginia, 2,000 bats were chopped to pieces by the turbines.

When federal investigators discovered the carcasses of 38 golden eagles and 336 other protected birds at two wind projects in Oregon, PacifiCorp Energy was assessed a $2.5 million fine for violating the Migratory Bird Treaty Act.

Simply put, wind farms kill wildlife both directly and indirectly, and lots of it.

Add to this problem the cost, the negative effect on quality of life for area residents, the gross inefficiency of wind power production and the fact that we don’t even need the electricity it would produce, and the reality sets in.

Any cost-benefit analysis on this project tells a clear story — the massive and permanent effects of wind power production are not worth it.

The question we must ultimately ask ourselves is this: Do we want to use public tax dollars to subsidize an unneeded private business to chop up our public wildlife?

Michael Butler is CEO of the Tennessee Wildlife Federation. The federation’s website is www.tnwf.org. 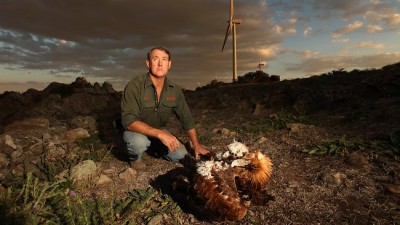