Donna Brazile. The gift that keeps on giving!

Donna Brazile just can’t shut up about what she witnessed as a Hillary campaign insider and it’s glorious.

Former interim Chairwoman of the DNC Donna Brazile rocked the political world after she dropped a bombshell revealing the underbelly of the DNC, exposing Hillary’s dirty tricks to secure the nomination.

Brazile blasted Hillary over her obvious health problems and said she wanted to replace the Dem nominee with Biden after Clinton fainted on 9/11 in New York.

She even mocked Hillary Clinton’s campaign slogan ‘Stronger Together’, claiming the DNC was full of tension and division based on race, gender and age.

The more Brazile speaks out about what happened behind the scenes, the better it gets.

Brazile says in her explosive memoir that she detected an alarming lack of enthusiasm for Hillary on the campaign trail as she traveled the country. The former DNC interim chair says Blacks and Hispanics showed virtually no support for Hillary.

As she traveled the country, Brazile writes, she detected an alarming lack of enthusiasm for Clinton. On black radio stations, few people defended the nominee. In Hispanic neighborhoods, the only Clinton signs she saw were at the campaign field offices.

But at headquarters in New York, the mood was one of “self-satisfaction and inevitability,” and Brazile’s early reports of trouble were dismissed with “a condescending tone.”

The fake news media worked around the clock to make it look like Donald Trump had no support from minority communities when it was Hillary Clinton who was lacking their support.

In contrast, Hillary’s rallies were low energy and lacking people. Fake news media often zoomed in to make it look like Hillary had a packed house when in reality barely any people showed up to her rallies.

And we’re supposed to believe Hillary Clinton lost the presidential election because of the Russians?

One question that Hillary cannot answer is how did the Russians manage to hack only the electoral college since she supposedly ‘won the popular vote’? 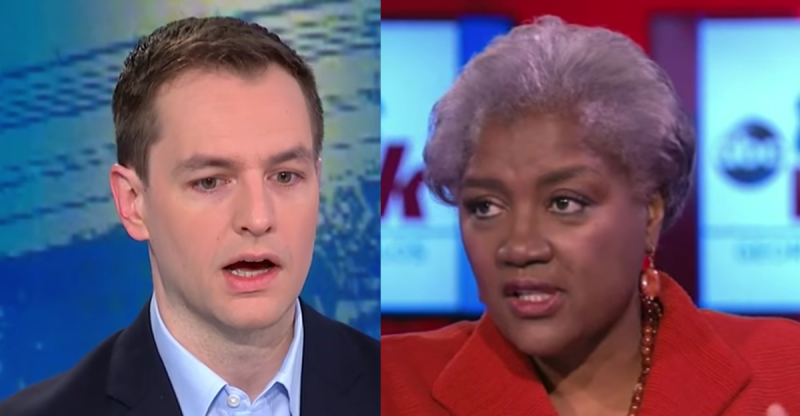 What else would you expect from a Hillary hire?

Donna Brazile does not enjoy working with former Clinton Campaign Manager Robby and she tells all about it in her new book, “Hacks.”

The former Democratic National Committee head worked with Mook and the Clinton campaign during the heat of the 2016 presidential election cycle. Brazile describes Mook during their time working together as aloof, uncompromising and generally paints the picture of a puerile young man who was singularly focused–to the detriment of the campaign–on pushing his agenda.

1) The Cultish Nature of the Mook Crew

“I want to talk about the arrogance and isolation of the Clinton campaign and the cult of Robby Mook, who felt fresh but turned up stale, in a campaign haunted by ghosts and lacking in enthusiasm, focus, and heart.”

2) ‘What Does This Have To Do With The Russians?’

“Try as I might to explain it to Brooklyn, all of my urgent pleas felt like they were words falling down a well. Take Hillary’s campaign manager, Robby Mook. He had this habit of nodding when you are talking, leaving you with the impression that he has listened to you, but then never seeming to follow up on what you thought you had agreed on.”

4) ‘Everybody Worshiped The Data And The Analytics’

“The young men that surrounded Robby Mook–and they were all men in his inner circle–had mastered a cool and removed style of politics. They knew how to size up voters not by meeting them and finding out what they cared about, what moved their hearts and stirred their souls, but by analyzing their habits. They could take all the things you bought while shopping online in the last six years, analyze them, and say they were confident that they knew pretty much all there was to know about you. … Everybody worshiped the data and the analytics.”

“One night when I went home I called Charlie Baker to warn him that I was struggling to keep Dolores contained. ‘Charlie, I’m about to kill Robby,’ I told him. ‘And it ain’t going to be pretty.’”

“Did he not understand that I had long-standing friendships with most of his superiors in Brooklyn, with the exception of Robby Mook?”

“Robby Mook believed he understood the country by the cluster of information about voters he had gathered.

I remember saying to him, after he described this very smart way he had determined which candidate people in a particular neighborhood were likely to vote for, that he was neglecting the whole story.”

8) He Kind Of Unnerved Me

“He has a cool gaze of someone who has a determined sense of values and judges everyone by those principles. That inner cool makes someone like me who runs hot feel as though I’m bouncing off the walls when I talk.”

“Even when Clinton squeaked by in the Iowa caucuses and when she took a drubbing in New Hampshire, Robby was unwavering. He had a plan and he was sticking to it.”

“Robby asked me to address the staff and volunteers, and I gave a speech off the cuff that was designed to remind them of the reasons we do this …

They saw me only as someone who could rouse up the emotions, but they were not interested in my practical advice. My feeling was that data was a tool for engagement, but there was no substitute for that human touch. This was a message that sunk to the carpet in the antiseptic rooms of Brooklyn.”

11) ‘Dismissed My Report With A Condescending Tone’

“Mook’s lieutenant Marlon Marshall ‘dismissed my report with a condescending tone in his responses. He and Robby didn’t appreciate challenges to their strategy.’”

“As the train pulled out of Philadelphia my phone rang. It was Robby Mook.
‘Madam Chair, I’m so sorry,’ he said. I could hear the tears in his voice. ‘I’m so sorry.’
‘I know, Robby,’ I said. ‘You did your best. You worked hard. We all did.”