Windmills and electric cars, both products are the result of the (Man Made) Global Warming Swindle, a FRAUD that should end, really doesn’t matter by whom – or how it ends ..

Remember the build up to Russia’s invasion of Ukraine in 2014, where gas export from Russia was weaponized against Ukraine? Of course China will attempt to do the same when it comes to rare earths, totalitarianism in a nutshell.

It also illustrate President Trump’s argument about protecting vital industries, this is a splendid example and will potentially serve as the final nail when it comes to tariffs, securing decades of necessary protection. The US should never rely on its adversaries, their role in a just world, ruled by law, is too important.

Back in April of 2018, when the trade war with China was still in its early stages, we explained that among the five “nuclear” options Beijing has to retaliate against the US, one was the block of rare-earth exports to the US, potentially crippling countless US supply chains that rely on these rare commodities, and forcing painful and costly delays in US production as alternative supply pathways had to be implemented.

As a result, for many months China watchers expected Beijing to respond to Trump’s tariff hikes by blocking the exports of one or more rare-earths, although fast forwarding one year later this still hasn’t happened. But that doesn’t mean it won’t happen, and overnight President Xi Jinping’s visit to a rare earths facility fueled speculation that the strategic materials will soon be weaponized in China’s tit-for-tat war the US.

As Bloomberg reported overnight, shares in JL MAG Rare-Earth surged by the daily limit on Monday after Xinhua said the Chinese president had stopped by the company in Jiangxi, a scripted move designed to telegraph what China could do next.

The reason for the dramatic market response is that the presidential visit flags policy priorities, and “rare earths have featured in the escalating trade spat between the U.S. and China.” Specifically, as Bloomberg notes, China raised tariffs to 25% from 10% on American imports, while the U.S. excluded rare earths from its own list of prospective tariffs on roughly $300 billion worth of Chinese goods to be targeted in the next wave of measures. And just in case the White House missed the message, Xi was accompanied on the trip to JL MAG by Liu He, the vice premier who has led the Chinese side in the trade negotiations.

Why does China have a clear advantage in this area? Simple: the U.S. relies on China, the dominant global supplier, for about 80% of its rare earths imports.

The visit “sends a warning signal to the U.S. that China may use rare earths as a retaliation measure as the trade war heats up,” said Pacific Securities analyst Yang Kunhe. That could include curbs on rare earth exports to the U.S., he said.

Xi’s visit came just hours after the Trump administration on  Friday blacklisted Huawei and threatened to cut it off from the U.S. software and semiconductors it needs to make its products. A spokesman for China’s foreign ministry told reporters Monday to “please wait and see” how the government and companies respond.

Of course, a Chinese export curb, or ban, would also cripple domestic producers, as domestic rare earth miners would be hurt, and likely need state subsidies, similar to US soybean farmers. But curbs could potentially help companies like JL MAG, which makes magnets containing rare earths that are used in products including electric vehicles and wind turbines.

Finally, to those looking to trade a potential rare-earth export ban, one place would be to go long the REMX rare earth ETF, which after hitting an all time high of $114 in 2011 during the first rare-earth “scare” during the China-Japan trade war, is trading some 90% lower as the market has all but discounted any possibility of a price spike. 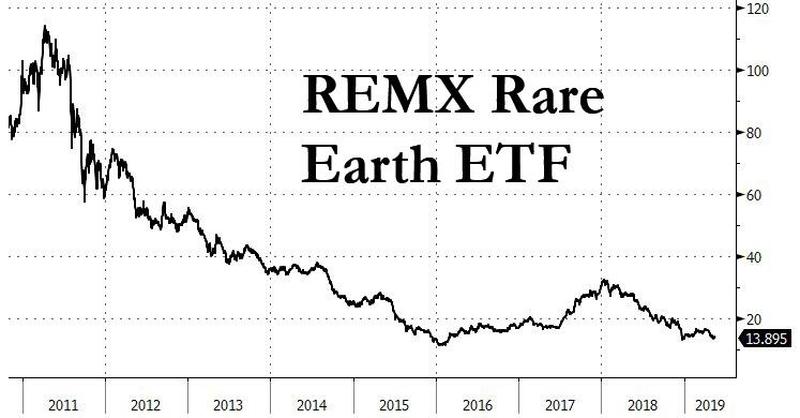 Needless to say, should China lock out the US, the price of rare earths could soar orders of magnitude higher.

Steve Bannon: China was not prepared to have Trump in office