Typical leftist (communist) incompetence, ignorant of history. What contrubuted to make the Black Death possible all over Europe? The Pope’s hatred for cats, cats hunted rats, rats spread the Black Death from port to port (via ships), a desease that still kill 1000’s today. Do not get surprised if the bubonic plague now will reappear in China.

From the video below: When they talk about China’s success stories when it comes to poverty, how the CCP has lifted 800 million out of poverty, remember, it is the same incompetent, corrupt and evil communist policies that not only put the chinese people into poverty in the first place, but also murdered up to a 100 million and wiped out a lot of their culture.

Video: ADVChina
China is not the 2nd richest country in the world. It’s not even close. People are getting lost in the propaganda. China is still largely, a very poor country, and the Chinese government is doing their own people a massive disservice by trying to pretend the poor people don’t exist.

When low IQ criminal leftist are in charge (the CCP):

Video: China Observer
The World’s Largest Water Conservancy Project
The South-North Water Transfer Project, known as the largest inter-basin water transfer project in human history, has once again sparked public concern and debate. Many question that this 77 Billion US Dollars mega-project has failed.

The nature of Communism, incompetence, greed and corruption, there will never be enough money for that ideology to run smoothly:

Mainland Taiwan is upset Lithuania is establishing diplomatic offices with East Taiwan and, how do we liberate West Taiwan from the criminal CCP?

Of course the CCP abduct foreigners, a lot of criminals both kidnap and abduct people. Law abiding people or regimes, don’t!

China on the Rise

Video: China Uncensored
China has seen massive flooding in recent weeks that has destroyed billions of dollars in property and killed, well we don’t really know the exact number because Chinese state media doesn’t really want to expose the extent of the damage. But the bigger problem in China is the corruption and lack of concern by officials for citizens’ wellbeing. In this episode of China Uncensored, we look at Chinese officials’ clandestine flooding operation and the violence they used to quell protests about it.

China is the Greatest Threat to the World

A Chinese Communist once said to me: “We do not lack people in China ..”

The Top Secret of Zhengzhou Severe Flood: The 24 hours of the Tunnel/Flooded within 5 minutes

Time to take out the international criminal organization known as the CCP once and for all!:

Low IQ., Criminal leftists: If you’re not happy and harmonious, believe us, we will make you ..!

China Has Become A “Prison”: Beijing Beefs Up Security Ahead Of Centennial Celebration

A new way of protesting the left’s (CCP’s) evil, incompetence and corruption?:

Lab Origins of the Biden Alliance

Everything by or from the left is FAKE (lies, counterfeit, cheating, this time the CCP) – No matter where in the world you check, I know, that is because so many of their ideas are fucking stupid and inferior:

China should be disarmed by imposing tariffs and economic sanctions, CCP is clearly out of control:

China prepares for ‘intense showdown’ with US

I have had my last Snickers!!

Remember the baby formula that made Chinese babies sick, some even died. If they can mix in poison in food for babies, imagine the kind of shit they will be mixing into chocolate bars (cheap or free stuff they can use as filling to replace ingredients that cost money to increase the weight and make it look and taste like there’s more chocolate than if they only use the legal ingredients according to the receipt) to make more money ..: 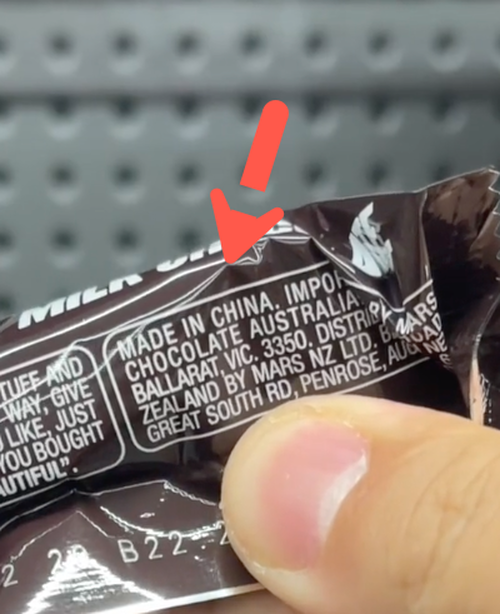 China’s Xi may be screwing up as badly as Biden, maybe even worse

Make China pay the West for protection against CCP like China makes the West and America pay for their military buildup, corruption and crimes through cheap, 3-grade, unsafe products, slave labor, market and currency manipulation:

You can’t make this shit up ..

Leftist incompetence and stupidity: The CCP wants Chinese people to have more children, children who will grow up to be abused, prosecuted without cause, tortured and murdered (for no or any reason):

Mike Lee is obviously not criticizing the Chinese people, but the policies of the multinational criminal organization called the CCP:

Pretending to Be Arrested Is the Latest Craze in China

“Keep As Much Money As You Can”: Hunter Biden Disclosures Offer New Details On His Chinese Financial Dealings And Associations

Why China’s future does not look bright

What a Chinese Invasion of Taiwan Would Mean For Australia

China Is a Paper Dragon