President Trump speaks about the U.S. role in the Paris climate change accord in the Rose Garden of the White House in June. (AP)

The Trump administration has decided to disband the federal advisory panel for the National Climate Assessment, a group aimed at helping policymakers and private-sector officials incorporate the government’s climate analysis into long-term planning.

The charter for the 15-person Advisory Committee for the Sustained National Climate Assessment — which includes academics as well as local officials and corporate representatives — expires Sunday. On Friday, the National Oceanic and Atmospheric Administration’s acting administrator, Ben Friedman, informed the committee’s chair that the agency would not renew the panel.

The National Climate Assessment is supposed to be issued every four years but has come out only three times since passage of the 1990 law calling for such analysis. The next one, due for release in 2018, already has become a contentious issue for the Trump administration.

Administration officials are currently reviewing a scientific report that is key to the final document. Known as the Climate Science Special Report, it was produced by scientists from 13 different federal agencies and estimates that human activities were responsible for an increase in global temperatures of 1.1 to 1.3 degrees Fahrenheit from 1951 to 2010.

The committee was established to help translate findings from the National Climate Assessment into concrete guidance for both public and private-sector officials. Its members have been writing a report to inform federal officials on the data sets and approaches that would best be included, and chair Richard Moss said in an interview Saturday that ending the group’s work was shortsighted.

“It doesn’t seem to be the best course of action,” said Moss, an adjunct professor in the University of Maryland’s Department of Geographical Sciences, and he warned of consequences for the decisions that state and local authorities must make on a range of issues from building road projects to maintaining adequate hydropower supplies. “We’re going to be running huge risks here and possibly end up hurting the next generation’s economic prospects.”

But NOAA communications director Julie Roberts said in an email Saturday that “this action does not impact the completion of the Fourth National Climate Assessment, which remains a key priority.”

While many state and local officials have pressed the federal government for more concrete guidance on how to factor climate change into future infrastructure, President Trump has moved in the opposite direction. Last week, the president signed an executive order on infrastructure that included language overturning a federal requirement that projects built in coastal floodplains and receiving federal aid take projected sea-level rise into account.

Seattle Mayor Ed Murray (D) said in an interview Saturday that the move to dissolve the committee represents “an example of the president not leading, and the president stepping away from reality.” An official from Seattle Public Utilities has been serving on the panel; with its disbanding, Murray said it would now be “more difficult” for cities to participate in the climate assessment. On climate change, Trump “has left us all individually to figure it out.”

Richard Wright, the past chair of the American Society of Civil Engineers’ Committee on Adaptation to a Changing Climate, has been working with the committee to convey the importance of detailed climate projections in next year’s assessment. The society establishes guidelines that form the basis of building codes across the country, and these are based on a historical record that may no longer be an accurate predictor of future weather extremes.

“We need to work on updating our standards with good estimates on what future weather and climate extremes will be,” Wright said Saturday. “I think it’s going to be a serious handicap for us that the advisory committee is not functional.”

The committee was established in 2015, but its members were not appointed until last summer. They convened their first meeting in the fall. Moss said members of the group intend to keep working on their report, which is due out next spring, even though it now will lack the official imprimatur of the federal government. “It won’t have the same weight as if we were issuing it as a federal advisory committee,” he said.

Other Trump Cabinet officials have either altered the makeup of outside advisory boards or suspended these panels in recent months, though they have not abolished the groups outright. Environmental Protection Agency Administrator Scott Pruitt decided to replace dozens of members on one of the agency’s key scientific review boards, while Interior Secretary Ryan Zinke is “reviewing the charter and charge” of more than 200 advisory boards for his department.

This is great news, another step taken in order to end the global warming scam! 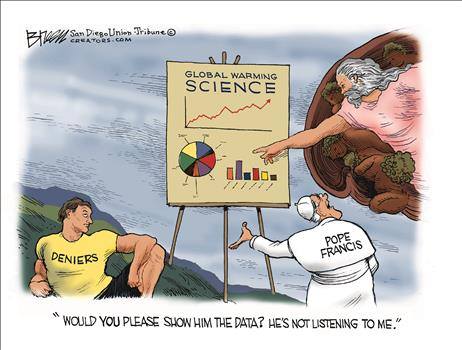 Pre-Determined ‘Science’: The Chair of the federal climate board disbanded by Trump was a World Wildlife Fund activist

You may have read that Trump has just disbanded the federal advisory committee on climate change, tasked with reviewing the National Climate Assessment recently leaked by the NYT.

Now you would be entitled to think that the committee was a bunch of totally impartial scientists. But you would be wrong, as Climate Depot reports:

Who is Dr Richard H Moss, Ex-Chair of the Advisory Committee for the Sustained National Climate Assessment

With the kerfuffle over the disbanding of the Advisory Committee for the Sustained National Climate Assessment, set up by President Obama in 2015, we have the usual appeals to false authority and the usual claims of “denying science”. However, a closer look reveals there is not much science here:http://sncaadvisorycommittee.noaa.gov/Membership

“The committee’s chair, Dr. Richard H. Moss, a senior scientist at the Joint Global Change Research Institute, told the Post that disbanding the group was “short-sighted.”

“We’re going to be running huge risks here and possibly end up hurting the next generation’s economic prospects,” he warned.“

Richard Moss is a WWF implant and has been in the climate debate for many years. More here:

Moss has been a member of the IPCC since 1993. He was a Review editor for IPCC AR5 WGII Ch. 14, “Adaptation needs and options”. From 2000 to 2006, he served as director of the coordination office for the United States Climate Change Science Program.

His doctorate is in Public and International Affairs.”

His WWF appointment is now described as a “Business Leave of Absence”: https://www.ametsoc.org/boardpges/cwce/docs/profiles/MossRichardH/profile.html

“He led preparation of the US government’s 10-year climate change research plan (2003) for which he was awarded the United States Department of Energy‘s Distinguished Associate award.

He was named a Fellow of the American Association for the Advancement of Science in 2006 and a fellow of the Aldo Leopold Leadership Program in 2001.

He has MPA and PhD degrees from Princeton University in public and international affairs and a BA degree from Carleton College in Northfield, Minnesota“

Donna LaFramboise queried his role in IPCC in 2011: