The year 2018 could mark the beginning of the end of climate change alarmist reporting. Projections of catastrophic melting of the ice sheets and sea level rise swallowing up the Earth’s coasts are increasingly undermined by observations.

Extensive glacier and ice sheet melt resulting in an accelerated sea level rise threatening the world’s population centers living along the coasts is indeed the most legitimate threat posed by a global-scale warming trend.

Alarming sea level rise predictions abound. Several meters of sea level rise due to the catastrophic melting of the Greenland and Antarctic ice sheets have been predicted based on anthropogenic CO2 emissions scenarios.

For example, claims that we shall experience 260 centimeters (2.6 meters or 8.5 feet) of global sea level rise by 2100 unless we dramatically curtail our fossil fuel consumption have been published by authors like Dr. Michael Mann and Dr. Richard Alley (Garner et al. 2017). 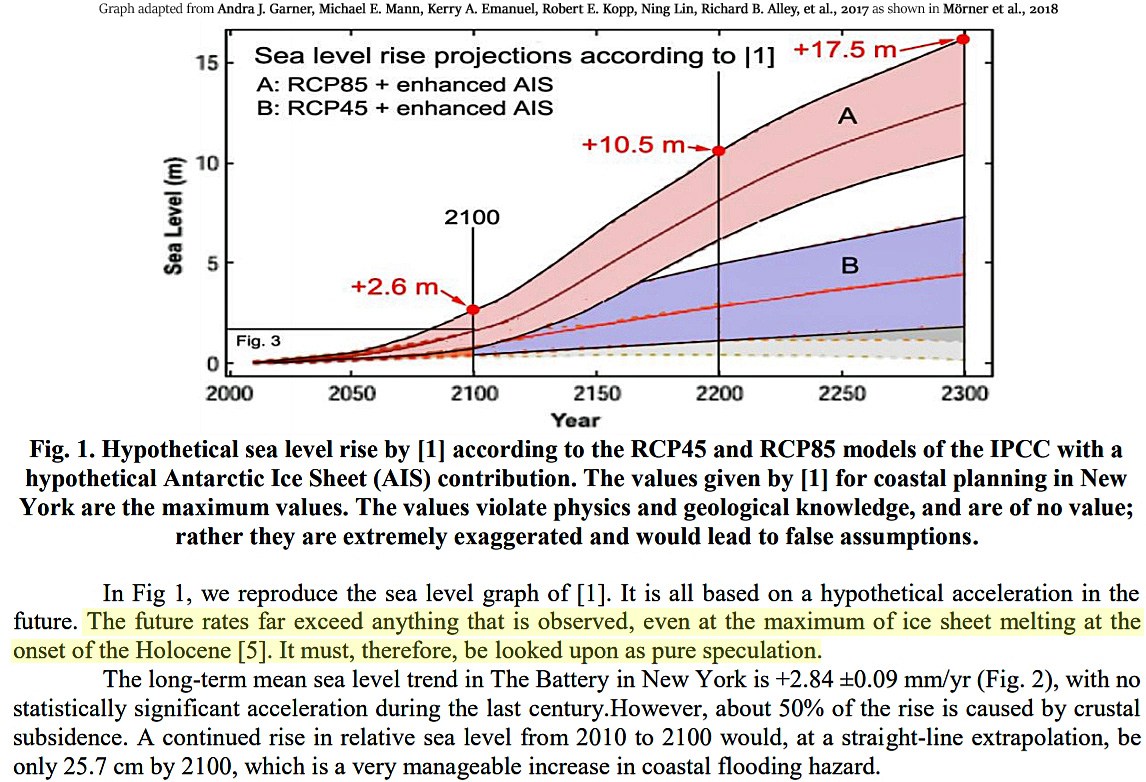 Even more significantly, satellite observations all across the globe show that the coasts of islands and sandy beaches and continents have not only not been shrinking for the last several decades, but they’ve also been stable to growing on net average.

Along the world’s coasts, there is today more land area above sea level than there was in the mid-1980s (Donchyts et al., 2016), leaving scientists “surprised”.

“We expected that the coast would start to retreat due to sea level rise, but the most surprising thing is that the coasts are growing all over the world,” said Dr. Baart. “We were able to create more land than sea level rise was taking.”  (BBC press release for Donchyts et al., 2016)

Dr. Nils-Axel Mörner – a world-renown sea level expert who headed the Department of Paleogeophysics & Geodynamics at Stockholm University – and three other co-authors have concluded that sea-level rise projections of 2.6 m by 2100 and 17.5 m by 2300 are “deeply flawed” and “not rooted in facts” (Mörner et al., 2018).

What follows is a very abbreviated summary of the dozens of alarmism-quelling papers published in 2018 pertaining to ice sheet melt, sea level rise, and coastal expansion.

Read rest at No Tricks Zone

After 50 Years of Failed Predictions, Science is in Crisis

Whom or what to believe? After 50 years of failed predictions, people are reasoning that something other than science is behind this alarmism.

Last September the usual media suspects got wind of yet another Intergovernmental Panel on Climate Change report. To those familiar, it was obvious from the “fire and brimstone” headlines. No matter how inconsequential, no heatwave, drought, hurricane or flood was missed. This is the customary softening-up period, intended to ensure that when a scary IPCC report lands, politicians will be pushed into taking even more drastic action on “climate change”.

And so it came to pass. Last month, the world’s “leading climate scientists” confirmed we had only 12 years left to keep global warming to a maximum of 1.5C above pre-industrial levels.

Debra Roberts, a co-chairwoman of the working group on impacts, says: “It’s a line in the sand and what it says to our species is that this is the moment and we must act now.” Even half a degree more would significantly worsen the risk of drought, floods, extreme heat and poverty for hundreds of millions of people. Crikey! It’s only three years since Paris, when we were assured 2C could save the planet. What’s next?

At least it’s 10 years longer than Prince Charles gave us. He warned in 2008 that “the world faces a series of natural disasters within 18 months, unless urgent action is taken to save the rainforests”. A decade later, in testimony before the US congress, Roger Pielke Jr, professor of environmental studies in the Centre for Science and Technology Policy Research, University of Colorado, contradicted Charles, saying it was “misleading, and just plain incorrect, to claim that disasters associated with hurricanes, tornadoes, floods or droughts have increased on climate timescales”.

But then in 2011 the International Energy Agency, after “the most thorough analysis yet”, warned that five more years of conventional development would make it impossible to hold global warming to safe levels. The prospects of combating dangerous climate change would be “lost forever”. Well now, in the tradition of ever-receding horizons, the IPCC gives us another 12 years to act.

Catastrophic scenarios aren’t new. In the 1960s and 70s, man-made global cooling was the fashion. In 1971, Stanford University professor Paul Ehrlich predicted: “By the year 2000, the United Kingdom will be simply a small group of impoverished islands, inhabited by some 70 million hungry people.” Ehrlich is now a warmist.

Whom or what to believe? After 50 years of failed predictions, people are reasoning that something other than science is behind this alarmism. And that something is the UN. What else? Its global reach, back corridors and duplicity have allowed it to build an unchallenged, mutually ­reinforcing $1.5 trillion industry of captive politicians, scientists, journalists, crony capitalists and non-governmental organisation activists bent on globalism through anti-Western sentiment and wealth transfer.