Rep. Alexandria Ocasio-Cortez is ready to tax the rich to make her Green New Deal a reality.

“People are going to have to start paying their fair share in taxes,” the recently elected New York Democrat told TV show “60 Minutes” in an interview set to air Sunday.

Speaking of prior decades’ taxation rates in the country, Ocasio-Cortez added, “Once you get to the tippy tops, on your 10 millionth dollar, sometimes you see tax rates as high as 60 or 70 percent.” 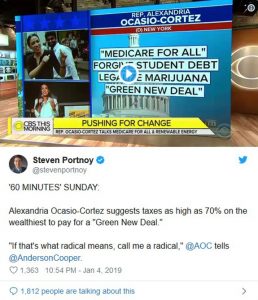 It shouldn’t be a surprise that the avowed “democratic socialist” went with the predictable “tax the rich” formula in order to pay for a massive government program to combat climate change.

But it would hardly be good news for most Americans if Ocasio-Cortez got her way.

In fact, such a scheme would mean that her constituents in New York City would pay a max income tax rate of 82.6 percent, as Americans for Tax Reform was quick to point out. Perhaps New Yorkers deserve what they voted for, but does the country?

Interest in the Green New Deal

While Democratic House leadership has so far balked at the Green New Deal, it enjoys strong support from over 40 members of Congress, per The Daily Caller.

But when asked if they would support it—albeit with a very favorable description of the deal that didn’t discuss higher taxes, for instance—81 percent of registered voters said they would back it.

However, polls tend to change quickly when people learn about how much policies cost them, and the details of the Green New Deal demonstrate that it’s about more than just a higher tax on a tiny number of rich people.

In fact, the tax hikes on the rich would be one of the least radical parts of the agenda.

It’s no exaggeration to say that if implemented, the Green New Deal would upend our way of life and destroy the liberty and prosperity that Americans, of all backgrounds, currently enjoy.

Among its goals are meeting “100 percent of national power” demand through renewable sources, retrofitting “every residential and industrial building for state-of-the-art energy efficiency, comfort, and safety,” and eliminating “greenhouse gas emissions from the manufacturing, agricultural, and other industries.”

Those changes are going to come with real costs. According to an editorial for Investor’s Business Daily, moving the economy away from fossil fuels to 100 percent renewable energy will come “at a cost of about $5.2 trillion over 20 years.”

So much for America’s newfound energy renaissance that has in large part come through innovative new oil drilling techniques.

Even if we’re willing to shoulder the costs, it’s, well, impossible to achieve.

“Producing 100 percent of electricity from renewable sources is a practical impossibility in the near future,” stated a report issued by the Senate Republican Policy Committee in December. The report, which looked at the Green New Deal, continued:

Scientists doubt it would be achievable by 2050, let alone 2029, the deadline Democrats would set. Such a massive overhaul in power generation would require the closure and replacement of about 83 percent of U.S. electricity generation, including all coal, natural gas, and nuclear plants.  … Today, renewable electricity—mainly wind, solar, and hydroelectric—provides only 17 percent of American electricity.

Make no mistake: While progressives have long been focused on green extremist policies, the Green New Deal proposals are significantly more radical than other environmentalist ideas like carbon taxes and subsidies for green industries. Foregoing the sticks-and-carrots approach to addressing climate change, this deal would instead rely on the ruthless bludgeoning of private industry and citizens through the levers of the state.

In fact, the plan outright dismisses attempts to “incentivize the private sector” toward greener policies as “simply inadequate to transition to a fully greenhouse gas-neutral economy as quickly as needed.”

Instead, the plan calls for direct government intervention to be its “prime driver.” (And in a mere 10 years, no less!)

A Trojan Horse of Liberal Goodies

But that’s not all. There’s more.

The Green New Deal doesn’t just include environmentalist proposals: It also includes a grab bag of other left-wing goodies to “mitigate deeply entrenched racial, regional, and gender-based inequalities in income and wealth (including, without limitation, ensuring that federal and other investment will be equitably distributed to historically impoverished, low-income, deindustrialized, or other marginalized communities in such a way that builds wealth and ownership at the community level.)”

Among the liberal wish list items included, the Green New Deal contains a proposal for universal health care and a basic minimum income program to make up for all the jobs lost in the process of transitioning to a fully green economy.

Of course, this will all come with an immense cost.

Citing an analysis by the Mercatus Center, Bob Moffit, a health care expert at The Heritage Foundation, wrote that the “Medicare for All” legislation proposed by Sen. Bernie Sanders, I-Vt., would cost $32.6 trillion over 10 years. A universal minimum income or basic income plan would also likely cost trillions of dollars a year.

The entire federal budget in 2018 was $4 trillion. The Green New Deal would require the U.S. to massively expand this already-bloated budget that is burying us in debt.

How do Green New Deal proponents propose to pay for this extreme growth in government?

“[I]n the same ways that we paid for the 2008 bank bailout and extended quantitative easing programs, the same ways we paid for World War II and many other wars,” the plan says. “The Federal Reserve can extend credit to power these projects and investments, new public banks can be created (as in WWII) to extend credit and a combination of various taxation tools (including taxes on carbon and other emissions and progressive wealth taxes) can be employed.”

In other words, by massively hiking taxes, and then borrowing and ultimately printing money. Then it would use public banks run by unaccountable bureaucrats to carry the whole thing out.

That’s not very democratic, but it is socialistic—an American version of a Soviet-style five-year plan focused on command-and-control economic solutions that have proven to fail the world over.

As Justin Haskins, executive editor at the Heartland Institute, wrote for the Washington Examiner: “Make no mistake about it: This is one of the most dangerous and extreme proposals offered in modern U.S. history. It’s the sort of thing you’d see in the Soviet Union, not the United States.”

The Stakes Just Got Higher

If there is one positive thing the Green New Deal does, it’s that it brings to light the fact that much of the environmentalist agenda is just a thinly veiled vehicle for implementing far-left socialism.

Given the fact that nearly half of millennials say they’d rather live under socialism or communism than capitalism, according to a 2017 poll conducted by the Victims of Communism, we shouldn’t ignore the fact that these ideas didn’t die at the end of the Cold War.

They’ve been repackaged by young, hip millennials, like Ocasio-Cortez, who can deceive a generation, mostly detached from history, into believing that the failed flim-flam sauce of socialism can somehow work this time around.

Despite overwhelming evidence of failure and suffering, the American left is now more openly embracing socialism—a worrying and disturbing trend that needs to be countered.

It’s no longer just Sanders waging this crusade in Congress. It is a growing cohort of younger, even more extreme members who are attempting to revive ideas that should have been left in the ash heap of history. As Sanders himself recently noted in a CNN interview, his 2016 campaign helped make certain positions “mainstream” that were previously “considered extreme and fringe.”

Whatever one thinks about Ocasio-Cortez, it’s undeniable that she connects with a large and growing subset of voters. Her everywoman persona and ability to seem truly genuine is making her a potent voice on the left.

The Instagram cooking advice and dance routines may be charming and relatable—especially to millennials—but attention to these trivial matters masks the radicalism and bankruptcy of her views.

Socialism is not the cure for what ails America, and it hardly takes a history lesson to figure this out.

The agony of a collapsing Venezuela, praised as an economic model for the future just a decade ago, is a stark example of how badly this can end for people of all income groups.

The Venezuelan regime started out as “democratic” socialism, too. It’s ending in failure, tyranny, and collapse.

Let’s not let dancing videos and Twitter hot takes distract us from that fact.

Do the rich pay their fair share of taxes? It’s not a simple question. First of all, what do you mean by rich? And how much is fair? What are the rich, whoever they are, paying now? Is there any tax rate that would be unfair? UCLA Professor of Economics, Lee Ohanian, has some fascinating and unexpected answers.