What if the theories of Catastrophic Climate change are correct.  What if the economically punitive Green Plans have been implemented?  What if the Co2 emissions are natural, not anthropogenic?

Answer: ‘You still will be Dead Broke.’  In another context, without flippancy, irrationality may be defined as the certainty that stopping the use of fossil fuels will solve the hypothetical climate apocalypse.

‘I am certain that there is too much certainty in this world.’ – Michael Crichton

First, an explanation of both Climate and Catastrophic Climate Change are necessary.  Both are the bastard children of the Anthropogenic Global Warming theory.  They were created because as Co2 has increased in the atmosphere temperatures have not increased over the last two decades.  They were propagated to deflect attention from that fact. 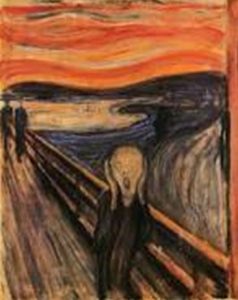 The picture to the right is Edvard Munch’s famous work commonly referred to as ‘The Scream.’  It was created in 1893 and here’s the modern version in this video. (Senator Feinstein/children)  This is the ‘Scream’ circa 2019.

The ‘Screams’ of the children in the video are fear of Climate Change (CC). But this doesn’t just include children as adults are included and there is a total irony; none know exactly what the specter of CC is.  There are laws against ‘child labor’ and the children above are being exploited, used, as are millions of adults.  This is at it’s core a twisted, viscous, sick plan to obtain power.  The children, especially, realize that they cannot do anything about the danger taught to them.  This is the perfection of argumentum ad verecundiam, an appeal to a falseauthority.  This means that the children will have to trust their lives to those in power.  Does that not sound familiar today??

The pronouncements of real, happening now and existential is most peculiar as the threat is nebulous, somewhere in the future.  I remember the 1950’s and the pictures of A-bomb tests on the little TV (my angst) and even today there is North Korea and their nukes. They were/are real but nobody’s losing any sleep over that.

Mass hysteria: In sociology and psychology, mass hysteria (also known as mass psychogenic illness, collective hysteria, group hysteria, or collective obsessional behavior) is a phenomenon that transmits collective illusions of threats, whether real or imaginary, through a population in society as a result of rumors and fear.  Children have been told the story of the ‘Bogeyman’ a nebulous evil creature to correct their behavior.  Today it is the Green Bogeyman and for certain the Environmental radicals are determined to use the Green Bogeyman to punish the miscreant human masses for their maltreatment of Gaia.

To add to the above is this link.  CC is catastrophic within the ‘End of World,’ screams.  The link chronicles the same prognostications going back over 2,000 years, none of which, obviously, have come to pass.  An interesting comment on the inherent pessimism of human nature.

Carbon taxes:  They are non-existent.  They are taxes on Carbon Dioxide. Carbon pollution does exist and it should be taxed (stopped).  It comes from improper fuel combustion and the pictures of Beijing show this effect.  It is also to be noted that approximately 7,000,000 souls die worldwide from Carbon pollution.  The vast majority are in the Third World countries and the carbon comes from burning bio-fuels for cooking and heating.  As well a significant number of deaths are children and they don’t scream, because the pulmonary diseases won’t let them.  It, more so, is to be noted that the rich, well funded Environmental groups in the West pay little or no attention to this horror.

Now, here’s absolutely what I don’t know or understand.  I have zero idea of what or when, with any even reasonable precision, the CC dangers are.  Neither do the apocryphal 97% of scientists.  The split second that I heard the insane claims of the earth being on fire and drowning at the same time, I ran to the so-called Skeptics side.  I also did something else.  I exercised skepticism with the Skeptics and started doing my homework.

97% of the apocalyptic events are coming from the media and politicians and vested interest environmental groups.  If you trust them I have a bridge in Brooklyn to sell you.  Give me the info above within a reasonablestatistical certainty and I will become a CC believer.

For now I will have to rely on geological studies, not hypotheses. Sometime in the future the earth’s temperature will increase [significantly] or decrease [significantly] (ice age).  All geological history shows this roller coaster pattern.  Fear an ice age.  Remember, all life, flora, fauna and human struggles to survive with cold.  Brief examples follow.

Two prominent geological epochs occurred 10 of millions of years ago, the Cretaceous and the Jurassic.  Co2 was ~7X higher and temperatures were parallel to the present CC apocalyptic predictions.  Briefly: ice caps were non-existent or vastly smaller than today’s sheets.  Oceans were higher (different continental shapes but present coastlines would be inundated).  Life was abundant in all forms and arable landmass (%) was greater and green. Links here and here    They are not chronicles of Apocalypse.

In comparison life in Ice Ages was anything but abundant. The last ice age ended about 18,000 years ago with the ice being 12,000’ thick.  Here are two interactive links showing the extent of some of these epochs, here, here. Many are predicting a cooling trend due to the sun’s activity and here’s an interesting account of a smalldrop in temperature, the Little Ice Age, between 1300 and 1870 A.D.  (the climate segue from the ~250 yr. Medieval Warm Period)  Also, and I think, a must read is this link. (Real science)

This entire Catastrophic scenario has every possibility of becoming a Sheep in a Wolf’s clothing.  Hidden underneath the portents of doom are possibilities of making fortunes that will  make Bezos, Gates, Buffet etc look like paupers.  Understand absolutely, I do not believe in the Catastrophic theories.  But, I believe in Green Jobs!!!

To explain this seemingly oxymoronic stance it works this way.  Dreams of an infinite, efficient, affordable energy source have existed for centuries. Drop wind and solar.  Defund studies into  ‘climate change effects on three toed Brazilian toads.’  Fund true ‘renewable’ energy technologies.  Fund adaption for the inevitable future climates.  The next irony is that the present proposed Green Jobs are an economic myth as they will only replace resource jobs.  Resource jobs can be retained by moving technological funding into using those resources for product manufacture more extensive than today’s use.

The final irony is that the above will be required in the future.  Embrace technological change, not climate change’s Green Bogeyman.

There are more than five million cubic miles of ice on Earth, and some scientists say it would take more than 5,000 years to melt it all. If we continue adding carbon to the atmosphere, we’ll very likely create an ice-free planet, with an average temperature of perhaps 80 degrees Fahrenheit instead of the current 58.