Image: Is There A Vaccines Abuse Link To The Coronavirus Outbreak?

Update (1035ET): Two inmates at HMP Bullinton prison in Oxfordshire, UK are being tested for coronavirus, according to Sky News. The men are being kept in isolation in their cells, while access has been restricted to the wing where the prisoners are. HMP Bullington has capacity for 1,114 inmates, and holds both prisoners on remand and who have been sentenced, along with young adults aged 18-21, according to Sky.

Eight people in the UK have been confirmed as having coronavirus – four of them testing positive on Monday.

Update (0900ET): The Guardian reports that the diagnosis of four people living in a single apartment block in Hong Kong that has been evacuated and some of its residents quarantined has prompted worried comparisons to SARS.

Medical workers descended on the apartment block in Tsing Yi district wearing full protective suits and evacuated 100 people in 34 apartments after cases were identified more than 10 floors apart, suggesting that the virus may have traveled through the pipes.

One 62-year-old woman was among the victims, and she apparently passed it to her son and daughter-in-law who live with her and were among seven new cases reported on Tuesday, raising the city’s total to 49, leaving it in third place overall, behind mainland China and the ‘Diamond Princess’, which is under quarantine in Yokohama. The worsening outbreak a high profile incident of an individual believed to have tried to escape quarantine prompted Carrie Lam to threaten affixing GPS tracking devices to anyone in an HK quarantine. 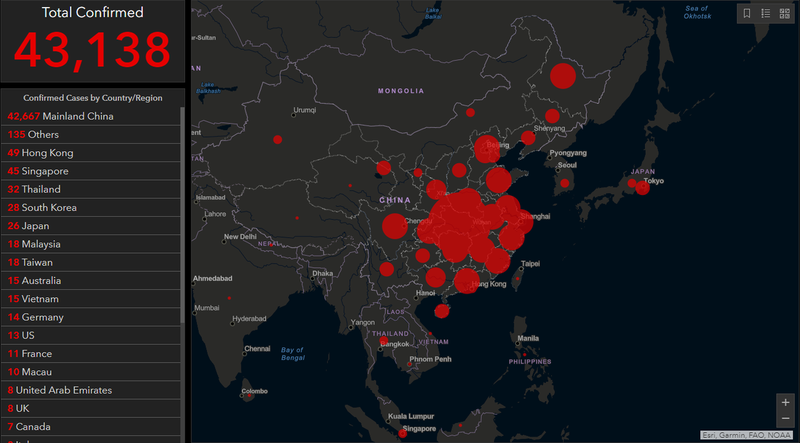 Plumbing was a problem during the SARS outbreak as well, as there were incidents where the virus traveled through the pipes.

Meanwhile, the Westerdam luxury liner still hasn’t found anywhere to dock after Thailand refused it entry earlier on Tuesday, which we noted below.

In other China news, the Communist Party Boss of Huangguang, a city that has been badly impacted by the outbreak, warned taht the crisis in his city is still “Very severe.” We suspect he will be scapegoated by this time tomorrow. After appearing in public yesterday for the first time since the outbreak kicked into high gear, President Xi said Tuesday that China will be “more prosperous” after the outbreak (despite its economy-crushing blowback). It’s the latest sign that Beijing is growing desperate to convince the public that China’s slowing economy can weather the outbreak without a severe downturn.

It begs the question: Will Xi add the capitalist concept of ‘creative destruction’ to his ‘Xi Jinping Thought’?

Meanwhile, Reuters reported on Tuesday that Xi warned top party officials last week that the country’s efforts to contain the outbreak – including quarantining 400 million+ people inside their homes and locking down whole cities – had gone too far. Xi fretted that the lockdown would threaten China’s fragile economy. Protecting and nurturing economic growth is Xi’s No. 1 priority in office and the bedrock of his ‘mandate’ to govern.

It’s unclear where Reuters got its information, but it claimed Xi made the remark during a Feb. 3 Politburo Standing Committee meeting that has already been covered by media reports (hand-picked comments were passed to state press). It just shows how much Cina’s tepid growth last year, the weakest in nearly 30 years, has been weighing on the president’s mind.

After reviewing reports on the outbreak from the National Development and Reform Commission (NDRC) and other economic departments, Xi told local officials during a Feb 3 meeting of the Politburo’s Standing Committee that some of the actions taken to contain the virus are harming the economy, said two people familiar with the meeting, who declined to be named because of the sensitivity of the matter.

He urged them to refrain from “more restrictive measures”, the two people said.

Local authorities outside Wuhan – where the virus is thought to have first taken hold – have shut down schools and factories, sealed off roads and railways, banned public events and even locked down residential compounds. Xi said some of those steps have not been practical and have sown fear among the public, they said.

China’s state council information office did not immediately respond to requests for comment.

In an incident that mirrors the circumstances of the 13th virus case diagnosed in the US by health officials in San Diego, Bloomberg reports that two Japanese men who were evacuated from Wuhan late last month have tested positive for 2019-nCoV after earlier having been cleared by the Japanese health ministry. It’s just the latest sign that the virus may be undetectable – or ‘silent’ – for a period, allowing its host to unknowingly spread it without being detected.

Health officials let the coronavirus patient in San Diego travel back to the army base quarantine briefly before realizing the error and recalling her to the hospital.

The case brings Japan’s total to 28 (not including the 136+ trapped aboard the DP).

In other news, the NYT reported late Monday that scientists are growing increasingly suspicious of Indonesia, and the fact that no cases have been reported in the country, despite thousands of tourists from Wuhan and Hubei visiting the country after the outbreak began. Many worry Indonesia is simply ignoring the threat, given that it was relatively slow to freeze flights from China. A consular official estimated that 5,000 Chinese remained in Bali alone, including 200 people from Wuhan.

“So far, Indonesia is the only major country in Asia that does not have a corona case,” Indonesia’s security minister, Mohammad Mahfud MD, told reporters on Friday. “The coronavirus does not exist in Indonesia.”

None of the 285 people who were evacuated from Wuhan and are now in quarantine on the Indonesian island of Natuna have shown signs of the virus, he added.

Update (0800ET): CNBC’s Eunice Yoon tweeted out a report that aired early Tuesday morning on CNBC detailing the struggles of one factory owner as China lurches slowly back to work.

Production lines across #China stall due to #coronavirus. Why one Beijing manufacturer worries disruption to the #supplychain could last until April. My report on electric motorbike company @EvokeMotorcycle. @CNBC pic.twitter.com/cPagv4pNMC

The takeaway: Much of China’s economy, particularly its industrial core, remains shuttered.

A 13th case of the Wuhan coronavirus has been confirmed in the US after one of the Americans who traveled to California from the epicenter of the outbreak on an evacuation flight last week has been determined to have contracted the virus.

Like with cockroaches, where there is one case of coronavirus, there will likely be more, especially since the patient traveled on a long-haul flight with dozens of others, increasingly the likelihood that at least some of them were infected. The State Department chartered four flights to rescue more than 800 Americans who had been trapped in Wuhan by the quarantine passed by Chinese officials on Jan. 23. One American who apparently opted to stay behind in Wuhan has succumbed to the virus, according to Chinese officials.

Even more alarmingly, the evacuee was accidentally mistakenly released from UC San Diego Medical Center, though she wasn’t released to the public: All evacuees will spend 14 days on designated military bases being repurposed as quarantines. The case was the first in San Diego.

Initially, the hospital reported that four patients undergoing testing at the hospital had tested negative for the virus, and they were discharged and returned to federal quarantine at Marine Corps Air Station Miramar, where more than 200 evacuees are staying. However, “further testing revealed that one of the four patients tested positive for 2019-nCoV,” CDC officials advised San Diego Public Health on Monday morning, and the person was returned to hospital” for observation, the hospital said in a statement.

The CDC said it’s tracing all of the individual’s contacts since arriving in the US, Reuters reports.

“CDC is conducting a thorough contact investigation of the person who has tested positive to determine contacts and to assess if those contacts had high risk exposures.”

Most US-China flights have been suspended by the White House, and only a handful of American nationals arriving on commercial flights from China have been quarantined under rules imposed on Feb. 2 to curb the virus’s spread.

There are now at least 3 cases of the virus diagnosed in California.

WHO Names Virus ‘COVID-19’, Warns “Must Do Everything Now… Vaccine Will Take 18 Months”