Michael Crichton’s books earned global plaudits. He invented the genre we now call the techno thriller whereby it is hard to discern whether it is fact or fiction you were reading.  The reason for that was because he wove his plots around well researched facts.

One of the best examples is State of Fear.  If you are a student of the climate change furor it is a must read chock full of intelligent insight into the twisted pseudo science driving the environmental movement.

Below is a key short extract in which Crichton deftly summarizes the reality of nature and man through the character, Kenner.  (emphasis added)

Let’s remember where we live, Kenner was saying.  We live on the third planet from a medium sized sun.  Our planet is five billion years old, and it has been changing constantly all during that time.  The Earth is now on its third atmosphere.

The first atmosphere was helium and hydrogen.  It dissipated early on because the planet was so hot.  Then as the planet cooled, volcanic eruptions produced a second atmosphere of steam and carbon dioxide.  Later the water vapor condensed, forming the oceans that cover most of the planet.  Then, around three billion years ago, some bacteria evolved to consume carbon dioxide and excrete a highly toxic gas, oxygen.  Other bacteria released nitrogen,  The atmospheric concentration of these gases slowly increased.  Organisms that could not adapt died out.

Meanwhile, the planet’s land masses, floating on huge tectonic plates, eventually came together in a configuration that interfered with the circulation of ocean currents.  It began to get cold for the first time. The first ice appeared two billion years ago.

And even today, after five billion years, our planet remains amazingly active.  We have five hundred volcanoes, and an eruption every two weeks.  Earthquakes are continuous: a million and a half a year, a moderate Richter 5 quake every six hours, a big earthquake every ten days.  Tsunamis race across the Pacific Ocean every three months.

Our atmosphere is as violent as the land beneath it.  At any moment there are one thousand five hundred electrical storms across the planet.  Eleven lighting bolts strike the earth every second.  A tornado tears across the surface every six hours.  And every four days a giant cyclonic storm, hundreds of miles in diameter, spins over the ocean and wreaks havoc on the land.

The nasty little apes that call themselves human beings can do nothing except run and hide.  For these same apes to imagine they can stabilize this atmosphere is arrogant beyond belief.  They can’t control the climate.

The reality is, they run from the storms.

What may we interpret from this?

The world is not going to end and neither is civilization going to end.  Cold, not heat, is to be feared.  Life has survived both extremes of climates.  What are termed as extreme weather events have always existed. 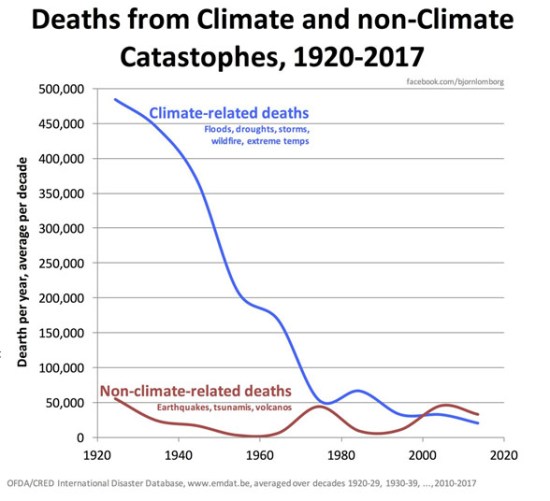 The graph above demonstrates we are getting better every day in understanding our environment, working with it and adapting to its harsher realities.

State of Fear is still in print and is an important guide for future decisions in life.

Another gem from this insightful writer I found apropos to the above. It ought to make us all think about the debacle that has been the pandemic ‘lockdown.’ From Crichton’s 2006 novel, ‘Next.‘

The Price We Pay for Scientific Fraud

“The cost of such fraud is enormous,” McKeown said, “estimated at thirty billion dollars annually, probably three times that.”

Fraud in science is not rare and not limited to fringe players.  The most respected researchers and institutions have been caught with faked data. So, keep in mind this brilliant author’s warning:

“The ultimate lesson is that science isn’t special—at least not anymore.  Maybe back when Einstein talked to Niels Bohr, and there were only a few dozen important workers in every field.  But there are now three million researchers in America.  It’s no longer a calling,  It’s a career.  Science is as corruptible a human activity as any other.  Its practitioners aren’t saints, they’re human beings, and they do what human beings do—lie, cheat, steal from one another, sue, hide date, fake data, overstate their own importance, and denigrate opposing views unfairly.  That’s human nature.  It isn’t going to change.”

Practically ALL of the African Continent to Suffer Anomalous Cold