In London Britain’s parliament declared a symbolic climate change “emergency” on Wednesday. Are these people truly insane or corrupt?

As independent researcher, T.L. Winslow writes to denounce these fools:

“They want us to be deathly afraid of not tens of degrees but 0.1C-0.2C in global warming per decade, and a total of 0.8C since 1880. What do they even mean by global warming? An increase in global avg. daily max surface temperatures? No, just yearly global mean surface temperatures, which includes night as well as day. Every day the temperature rises and falls tens of degrees, and nobody could detect a 0.1C change in the middle of the day without instruments, much less a mathematical mean, and even less that tiny amount in a decade, but even worse, the so-called yearly global mean surface temperature is an artificial non-physical statistic concocted from often questionable measurements and calculated with computers after running climate models filled with CO2 warming subroutines existing only in scientists’ heads that invariably run hot and are chaotic.

Speaking of history, ever heard of the Ordovician Period, from 485.4 million years ago to 443.8 million years ago (41.2 million year span)? The atmospheric concentration went from 7,000 ppm, when the climate was hot, down to 4,400 ppm, when there was a million-year ice age. How ridiculous the CO2 greenhouse warming hoaxers of today look with their pathetic attempts to wrest catastrophe from an increase from 300 ppm to 400 ppm.”

But as seasoned skeptical readers know all too well the sheeple are the most scientifically illiterate section of the population and look to ‘role models’ to do all the thinking and act for them.

What Is A Climate Emergency?

Dozens of towns and cities across the UK have already declared “a climate emergency”. There is no single definition of what that means but many local areas say they want to be carbon-neutral by 2030. What does that idiocy really mean? De-industrialization? 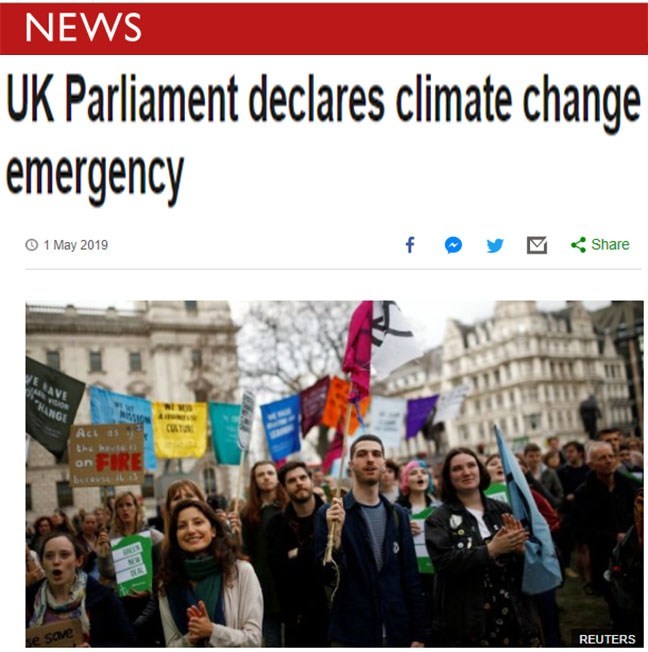 Nutjob leader of the Labour Party, Jeremy Corbyn told lawmakers they should listen to those “who have the most to lose” from climate change, saying the younger generation is “ahead of the politicians on this, the most important issue of our time”.

“Speaking of religion, as the big year 2000 approached, not only was the techie world rife with alarmist fears of Y2K, which resulted in a government boondoggle to fix computer programs even when they didn’t need it, the Christian world was rife with alarmist fears of the End of Days (Apocalypse) and the Second Coming of Christ, the Spirit in the Sky, which didn’t happen, so that by now a void has been left, just in time for you know who Albert Arnold “Al” Gore Jr. (1948-), the new huckster prophet who doesn’t know science or math but pretends to have a crystal ball and see the future, which is kaching! climate alarmism – see my TLW’s Climate Alarmistscope for a list of recent climate alarmist agitprop articles on the Web.”

The believers in such BS spewed remorselessly by the Jeremy Corbyns of this world are utterly unaware that the proper metric for measuring our planet’s temperature is by using the Kelvin scale (rather than Fahrenheit and Celsius scales used commonly). That tells us a very different (and sobering story).

The Kelvin scale was discovered by Lord Kelvin (William Thompson). The size of each degree is the same as those of the Celsius scale but the Kelvin scale starts on absolute zero (273.15 degrees lower than 0oC

What Is The Surface Temperature Of Earth In Degrees Kelvin?

That Means All The Idiots Out There Are Getting Upset About A Change In Global Mean Surface Temperature From 287 K To 288 K.

There are 197 million sq. mi. of Earth surface area. Maybe they take a giant thermometer and stick it up the Earth’s ass like an infant. Obviously global mean surface temperature is an illustration of the slogan that statistics lie, and the only useful physical measurements are the daily max and min temps, and real global warming would see these two track each other closely, else any talk of global warming would be crapola.

And NASA’s claim that they can calculate a world temperature back to 1880 is moose hockey, because outside the U.S. until recently there was almost no data being recorded. Notice that the global warming figures never have any real mathematical validity as proved by failure to provide a standard deviation and variance, and to name which type of statistical model governs it. Why?

Because they’re peddling junk science, tricking-up a statistic like a pretzel then pushing it for more than it’s worth to claim horrific looming Armageddon, always with the apology that the tinier the global warming the more we should be scared of it.

Meanwhile the greenhouse gas warming agitprop artists love to push the meme that there is no evidence of a global conspiracy among scientists, even after the Marxist Green New Deal was announced exposing their hand that they’re all on the same team working to destroy capitalism itself to create a Communist utopia like in Stalin’s defunct Soviet Union.”

The whole con game runs off the term Greenhouse Gas Effect. It should be called Greenhouse Glass Effect, because it’s not CO2 it’s glass that traps heat generated by visible and UV light from the Sun and keeps greenhouse air warm, all by convection, not infrared radiation, since infrared passes through glass.

For example, infrared heat lamps and infrared camera lenses, letting it out of the greenhouse, while the glass blocks convected air from leaving, building up a warm layer at the top that builds back down to the surface, causing runaway warming up to a limit set by the Sun until the windows are opened or shades are drawn.

As to CO2, greenhouse operators not only use windows and shades, but pump CO2 into their greenhouses to feed the plants, usually setting a level of 1200 ppm. It doesn’t increase the greenhouse’s air temperature any more than your CO2-rich breath can heat your zipped-up sleeping bag more than your metabolism did. CO2 has nothing to do with warming greenhouses, but they might stock CO2 fire extinguishers for emergencies.

The discrepancy between the policy they advocate and the opinion of the average Joe might have something to do with all the lies government agencies are pushing. Who would lie about a real crisis?

Who would counterfeit data and use media outlets as propaganda machines?

The governments desperate disinformation campaign backfires because they underestimate the people, thinking the people are too ignorant and stupid to understand what’s going on.

Counterfeited data, lies and FAKE, alarmism bullshit kind of falsify itself because it is easy to both feel, see and empirically check the facts.

Perhaps people think that the made up problem should be solved by those corrupt politicians that actually made them, i know i do.

It’s actually rather easy too, on top of that it saves a lot of money, almost unlimited amounts of money.

Majority of Brits unwilling to cut back to fight climate change, poll finds

Polls continually show that most people want the government to “do something” about climate change.

Yet when it comes down affecting their lifestyle, it turns out they are not quite so keen after all! 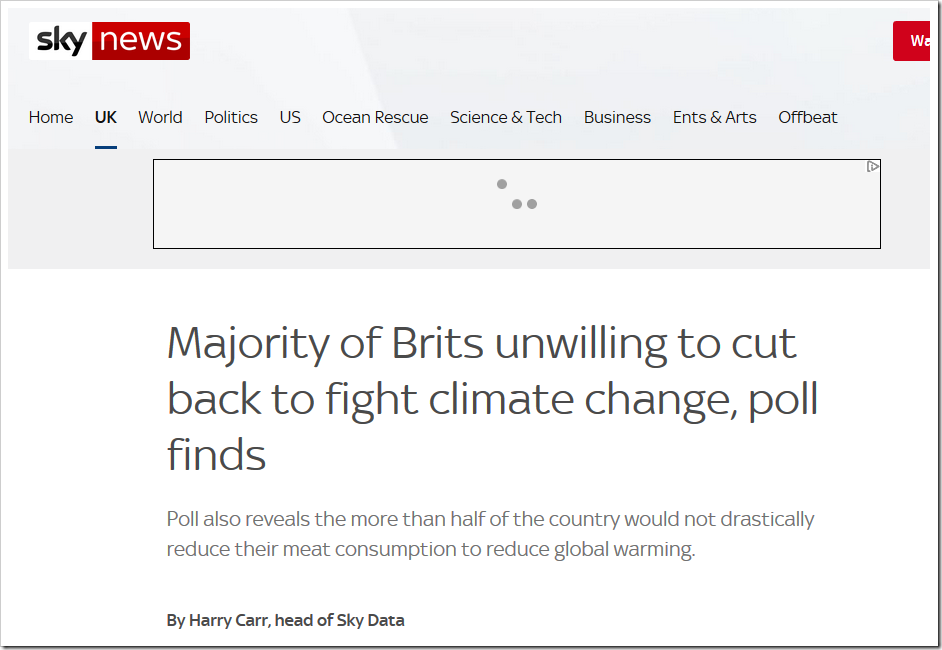 The majority of Britons are unwilling to significantly reduce the amount they drive, fly and eat meat in order to combat climate change, a Sky Data poll reveals.

People responding to polls often overclaim their willingness to change their behaviour in ways considered socially desirable – but despite this some 52% say they would be unwilling to reduce the amount of meat they eat much (31%) or at all (21%) to help reduce global warming.

Four in ten say they would be willing to either reduce their meat consumption significantly (35%) or give it up entirely (five percent). A further eight percent do not eat meat. 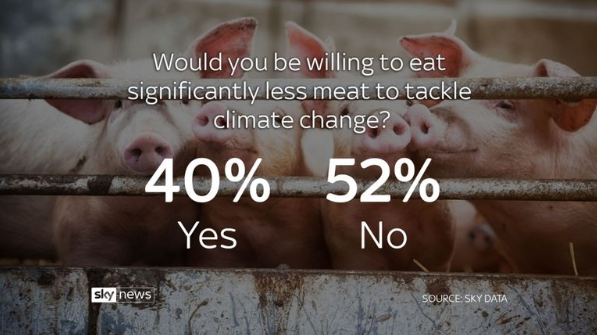 A report from the Committee on Climate Change called for people to reduce how much meat they eat and how often they fly.

It also called for the government to bring forward the planned ban on conventional car sales by ten years to 2030, encouraging people to switch to driving electric cars. 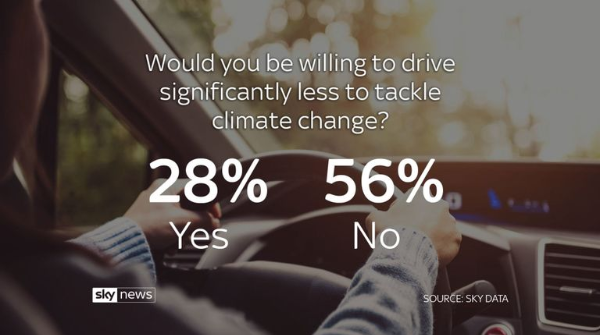