Image: Here’s the Shockingly Small Number of People Who Died From Only the Coronavirus

Related: WHO Redefined The Term ‘Pandemic’ To Profit Big Pharma 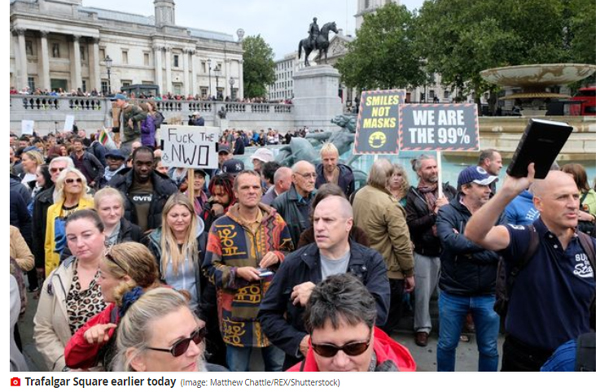 Despite media attempts to belittle and stifle dissent thousands of protesters peacefully massed in the very heart of London on Saturday 29th August 2020 against the anti-freedom, anti-science pandemic tyranny.

Myriad photographs and videos of the huge crowd testify it was far larger than the lying media’s claims of “hundreds of conspiracy theorists” and “far right activists.”

“Thousands of anti-lockdown protesters have gathered in central London, claiming coronavirus is a “hoax”.The “Unite For Freedom” march started in Trafalgar Square at noon on Saturday, with demonstrators calling for ‘no more lockdowns, ‘no to vaccinations’ and ‘no to government lies’,” reports the Mirror’s Jamie Hawkins.

Very evident from photos of the event was that masks were barely in sight and social distancing rules completely ignored. Indeed, the only faces wearing the mouth diapers were the police officers unable (or unwilling) to enforce the tyrannical government emergency rules. This was despite Scotland Yard handing out an open letter addressed to the scores of attendees.

The letter advised that anyone attending a gathering of more than 30 people may be at risk of committing a criminal offence. However, the police officers at the scene watched on powerless to enforce the anti-free speech order in face of the overwhelming numbers gathered. 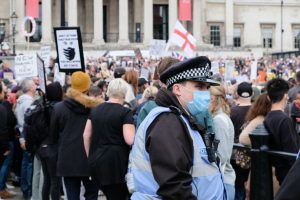 What is frequently ignored, often intentionally, is that the British Government’s science advisory panel on infectious diseases downgraded the dangers from the ‘novel coronavirus’ to the level of a normal influenza outbreak as far back as March 19 2020 – just days before the ‘lockdown’ was implemented.

There is enormous controversy over the medical evidence and scientists in many disciplines, including the UK government’s own top adviser who admitted: ‘Lockdown A Monumental Mistake.’

While data fraud, alarmism and misreporting has been revealed thanks to an Official Report which shows the UK Government faked cases to cause more alarm.

An increasing number of medical experts, economists, scientists and a president are declaring that the extreme measures in shutting down entire national economies could be a case of the ‘cure being worse than the disease.’

Tens of thousands of UK patients requiring treatment for other diseases such as cancers have had treatments curtailed, postponed and canceled.

Whistleblower NHS staff are coming forward to reveal that wards have been empty and staff have had few, if any, actual patients during the ‘crisis.’  Worried doctors believe that the death toll from such measures will far exceed the deaths from the virus. 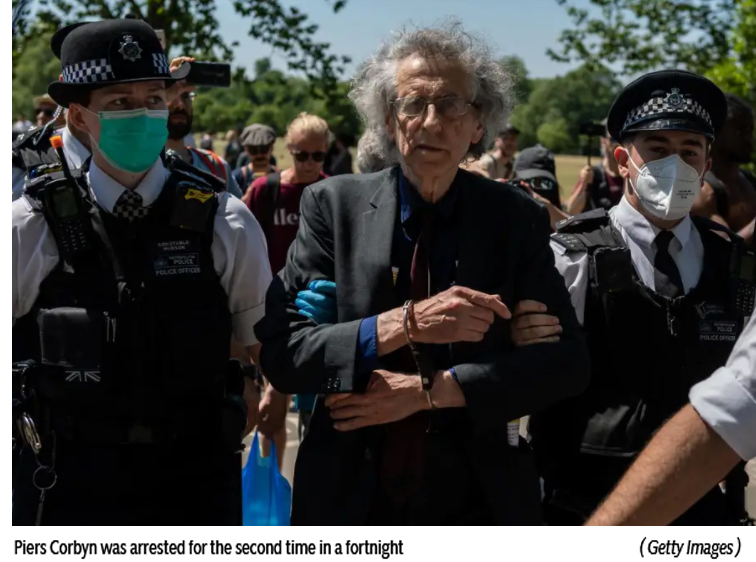 Among the speakers in Trafalgar Square was Principia Scientific International’s own Piers Corbyn (photo, above) alongside David Icke and other prominent civil rights campaigners. However, Mr Corbyn (a self-confessed socialist and brother of former Labour Party Leader, Jeremy) was later escorted away by police, according to one Twitter user who was at the scene. Corbyn’s prominence at the rally confirming that a wide cross section of society – left and right – oppose the draconian virus measures.

The veteran activist was detained by police on May 16 after a crowd of people gathered in central London to oppose Government efforts to combat the virus crisis. 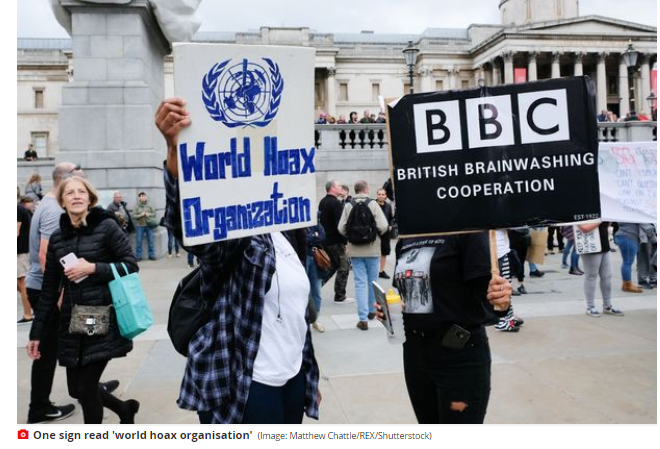 Sadly, the vast majority of citizens have far too long trusted only one source of information – the corporate mainstream media (MSM) and the public announcements of the State. But such protests as seen today in London, Berlin and other cities around the world shows not only that there is a great awakening taking place, but that the “great reset” planned by the globalist elite to restrict our freedoms even further, will not receive public acquiescence.

Many of the banners on display in London labeled the pandemic a hoax typifies an awakening to the corruption of governmental bodies such as the World Health Organization (WHO) which gets 80% of its finances  from voluntary contributions.

Activist Sonia Poulton, who was part of the protest said: 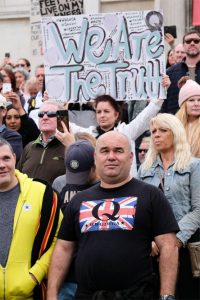 Conspicuous among the crowd were those wearing ‘QAnon’ shirts, badges and caps. The media paints the movement as a “right-wing conspiracy” for championing action against globalist corruption, satanic worship and child trafficking,

In its most recent 2017 voluntary contribution report the WHO accounted for the $2.1 billion it received from private foundations and global corporations. Those corporations, such as vaccine companies, have most to gain from promoting the continuation of ‘lockdown’ and the mass vaccination programs being planned by national governments.

Meanwhile, a London-based newspaper, The Evening Standard, reports that London’s Metropolitan Police were cracking down on such open dissent of the “scamdemic”:

Meanwhile, Scotland Yard issued an open letter addressed to the scores of attendees. The letter advised that anyone attending a gathering of more than 30 people may be at risk of committing a criminal offence. It was handed to the protesters as they marched down Whitehall.”

The hosts – Save Our Rights, said there were 35-40 thousand in total by 4pm, judging by the extensive size of the crowd. Trafalgar Square is known to have a capacity of 40,000.

Despite the huge numbers, there has been a news blackout about the event on BBC and Sky News. If it was BLM it would be all over the news and for a far smaller turnout. The Government and media have plenty to hide.

Oops: It Looks Like the Vast Majority of Positive COVID Results Should Have Been Negative