The east coast of South America, the first known instance of “America” being used in a document. IMAGE: LIBRARY OF CONGRESS

In April 1507, German cartographer Martin Waldseemüller published his Universalis cosmographia secundum Ptholomaei traditionem et Americi Vespucii aliorumque lustrationes, or The Universal Cosmography according to the Tradition of Ptolemy and the Discoveries of Amerigo Vespucci and others.

It was the first known map to feature parts of the New World labeled “America,” derived from the Latin version of Vespucci’s first name.

Vespucci had traveled up and down the east coast of South America a few years earlier, finding it to extend much farther south than previously thought — a whole new continent.

Composed of 12 separate woodcut prints, the map was meant to be assembled and hung on a wall. Using a modified Ptolemaic projection, Waldseemüller aimed to reconcile the recent discoveries of Vespucci and others with existing knowledge.

On the map, the unexplored continent of North America is called “Parias,” while the newly christened America describes the South American coast all the way down to the present-day port of Cananéia, just south of São Paulo, Brazil.

In the east, the map extends to a region labeled “India Meridionalis” or “Southern India” — the great peninsula of Thailand, Cambodia, Laos and Vietnam — and to scattered and unlabeled islands beyond. 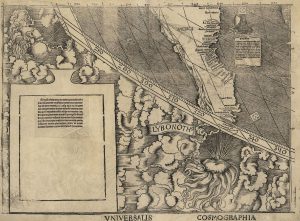 To watch all the maps ..