From the AMERICAN THORACIC SOCIETY and the “consensus is the same as data” department comes this eyeroller of a claim that seems to confuse climate, real air pollution, and weather. It looks like they are trying to give a whole new meaning to “allergy season”. Of course, it comes from the same George Mason university that aided and abetted the Shukla scam, and soon will be bring 97% faker John Cook on board, so I don’t give much credence to it 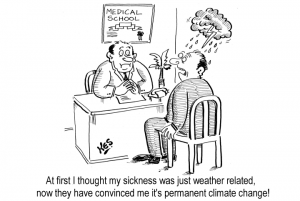 Survey results are published in the October issue of the Annals of the American Thoracic Society.

“The response from international physicians underscores that of American respondents who noted the impact of illness severity related to increases in pollution, specificallyasthma, COPD, pneumonia and cardiovascular disease,” said John Balmes, MD, past Chair of the ATS Environmental Health Policy Committee and one of the study authors.

Respondents further noted the following as the most common health effects of climate change among their patients:

The survey, which was conducted by the Center for Climate Change Communication at George Mason University, polled 5,013 international members. The survey had a response rate of 9.8 percent and respondents represented 68 countries.

The survey results come on the heels of the DC District Court of Appeals’ hearing of oral arguments related to the US Environmental Protection Agency’s Clean Power Plan on September 27. ATS and several physician organizations jointly filed an amicus brief with the court arguing that climate change has negative consequences for patients’ health.

It is worth noting that up until 2005, the medical community “consensus” was that stomach ulcers were from stress, smoking, bad diet, and other cause. It wasn’t until two people actually looked at autopsy data that they discovered the true cause. From a 2005 Discovery Magazine article, some familiar excerpts:

The medical elite thought they knew what caused ulcers and stomach cancer. But they were wrong—and did not want to hear the answer that was right.

How did you get the word out about your discovery?
I presented that work at the annual meeting of the Royal Australasian College of Physicians in Perth. That was my first experience of people being totally skeptical. To gastroenterologists, the concept of a germ causing ulcers was like saying that the Earth is flat. After that I realized my paper was going to have difficulty being accepted. You think, “It’s science; it’s got to be accepted.” But it’s not an absolute given. The idea was too weird.

That letter must have provoked an uproar.
It didn’t. In fact, our letters were so weird that they almost didn’t get published. By then I was working at a hospital in Fremantle, biopsying every patient who came through the door. I was getting all these patients and couldn’t keep tabs on them, so I tapped all the drug companies to request research funding for a computer. They all wrote back saying how difficult times were and they didn’t have any research money. But they were making a billion dollars a year for the antacid drug Zantac and another billion for Tagamet. You could make a patient feel better by removing the acid. Treated, most patients didn’t die from their ulcer and didn’t need surgery, so it was worth $100 a month per patient, a hell of a lot of money in those days. In America in the 1980s, 2 to 4 percent of the population had Tagamet tablets in their pocket. There was no incentive to find a cure.

The microbiologists in Brussels loved it, and by March of 1983 I was incredibly confident. During that year Robin and I wrote the full paper. But everything was rejected. Whenever we presented our stuff to gastroenterologists, we got the same campaign of negativism. I had this discovery that could undermine a $3 billion industry, not just the drugs but the entire field of endoscopy. Every gastroenterologist was doing 20 or 30 patients a week who might have ulcers, and 25 percent of them would. Because it was a recurring disease that you could never cure, the patients kept coming back. And here I was handing it on a platter to the infectious-disease guys.

Does this consensus protection sound familiar?