Around 80 Somali Muslims sued their employer for religious discrimination, however, a federal judge noticed something odd about their claim.

More than 80 Somali Muslims filed a massive lawsuit against their employer for firing them when they walked out after he refused to allow extra time off for prayer and fasting. However, the entitled migrants soon had their satisfied grins wiped off their faces when the judge reminded them of one crucial detail.

Around 80 Somali Muslim migrants united in a monumental lawsuit against JBS Swift & Co. meatpacking plant in Omaha in 2008, alleging that their gracious employer had mistreated and religiously discriminated against them. Backed by the Equal Employment Opportunity Commission, the migrants argued that the employer had fired them because of their religion and that they were denied constitutional rights. Unfortunately, the federal judge didn’t see things their way.

After filing a religious discrimination suit in 2010, the Muslims claimed that by not allowing them special accommodations for routine prayer breaks along with their state-mandated breaks, JBS management had denied them their rights.

After 6 long years, the federal judge in Omaha ruled last week that the employer had every right not only to deny the extra breaks but also to fire the ungrateful employees because they had lied about being warned of termination if they walked off the job. Fox News reports that the U.S. District Court in Omaha ruled that there was no evidence of discrimination.

The judge came to this conclusion for several reasons, the obvious one being that their employer offered them jobs knowing that they are Somali Muslims. Of course, the migrants also failed to mention that their “discriminatory” employer had already given them special breaks for Ramadan and shortened shifts to accommodate their prayer times.

Although the Muslim employees claimed that they were denied their religious rights and had no idea they’d be fired, the judge found that they had been accommodated many times and were forewarned of termination. 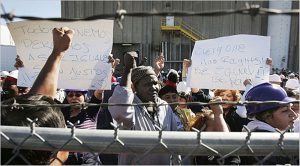 The key detail, however, was revealed when the judge found out that the migrants had lied about receiving fair warning that they would be terminated if they walked off the job again.

The migrants waited until they had attained employment at JBS before coming forward with an extensive list of burdensome demands. The first was that they must be released early each workday for evening prayer. The second was that they must have special breaks throughout the day to fulfill their other prayer requirements. They also demanded that the company change its scheduled meal times to coincide with their religious prayer breaks, the Grand Island Independent reports.

While the company was willing to work with them, they couldn’t possibly change around their entire schedule to favor the entitled new-hires. JBS also explained that it would be a safety violation to let such a large number of employees leave the line at the same time. Of course, the Muslim migrants weren’t concerned with legalities until they thought they could bend them in their favor. 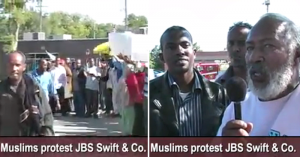 The complainants failed to mention that after rioting in the company cafeteria, they refused to return to work unless their impossible demands were met.

On September 19, 2008, they collectively walked out because they were dissatisfied that their many demands would not be met. Just days later, management warned the workers that if they refused to work again, they would be out of a job. As expected, dozens of Muslim migrants started a riot in the cafeteria, refusing to return to work, forcing management to call the police. After quelling the demonstration, the 80 Muslims who still refused to return to work were subsequently fired per the agreement.

Luckily, the judge saw right through their victimhood, finding that no matter how much privilege they received from their employer, they were still demanding more. This is exactly how Islam in the West establishes Sharia.

Beginning on a small scale, Muslims play the victim, whining about discrimination if they aren’t given special privilege at their jobs, schools, and places of business. While this often burdens the non-Muslim majority with having to appease the 1 percent, the Muslims are just getting started.

When they become a large minority, terrorist attacks and fear of being sued for criticizing Islam are motivation enough for the majority to remain silent. Unfortunately, this is blasphemy law in the making. Eventually, no one will be allowed to speak out against Islam without fear of being targeted either by jihadists or in court. Slowly, our freedoms of speech, media, and religion are denied as they are found to be insulting to Muslims.

Since Islam requires that all strive to implement and live under Sharia law, Muslims find that using the rights afforded them in the West is an effective way to further their agenda. Through higher birth rate, conversion, terrorist attacks, and constant suing, Muslims are able to freely practice their oppressive religion while the rest of us tip-toe around their feelings.