The continent warmed from 1982-1998, but a cooling trend since 1998 has nearly wiped out all the previous warming.

Overall, there has been no significant temperature change in North America since 1982. 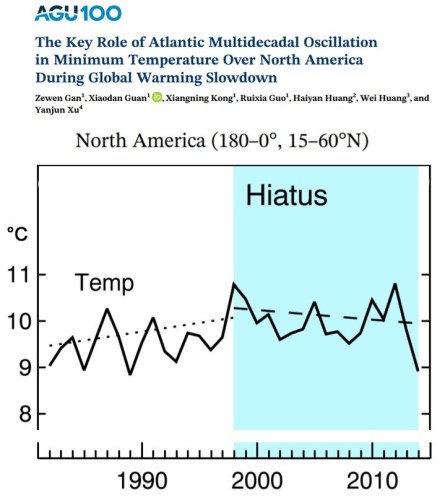 The warming and cooling trends, especially the daily temperature minimum (Tmin), are well-correlated (r=0.71) with the path of the Atlantic Multidecadal Oscillation (AMO) during 1950-2014, leading the authors to conclude that the temperature trends over this 32-year period are “a result of” natural changes in the AMO.

Daily Minimum temperature (Tmin) is an important variable in both global and regional climate changes, and its variability can greatly affect the ecological system. In the early 21st century, warming slowdown is seen over the North Hemisphere and North America is one of the major cooling centers.

In this study, we found that Tmin experienced an obvious decline in North America during warming slowdown period.

Such Tmin decline is closely related to the Atlantic Multidecadal Oscillation (AMO), the correlation between the decadal components of Tmin and AMO reached 0.71 during 1950-2014.

According to composite analysis, the AMO on the positive (negative) phase takes two low-pressure (high-pressure) systems in the northeastern Pacific and the North Atlantic at night, accompanied by cyclonic (anticyclonic) circulations and warm (cold) advection in North America.

Therefore, the analyses conclude that the Tmin decline during warming slowdown period is a result of the synchronous decrease of the AMO. The results emphasize the key role of AMO on the decadal variation of Tmin in North America. 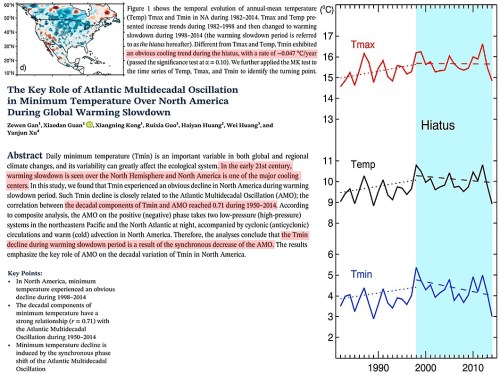 Another new paper renews the global warming “hiatus” debate and documents a 21st-century cooling trend in northern China that also effectively snuffs out the previous decades of warming for the region.

Satellite-based regional warming hiatus in China and its implication

Global warming ‘stalled’ or ‘paused’ for the period 1998–2012, as claimed by the Intergovernmental Panel on Climate Change (IPCC) Fifth Assessment Report (AR5) (IPCC, 2013).

However, the early drafts of IPCC AR5 have no detailed explanation for this “hiatus” since 111 of 114 climate models in the CMIP5 earth system model did not verify this phenomenon. …

In 2017, after a wave of scientific publications and public debate, the climate models as reported in IPCC remain debates, including definitions of “hiatus” and datasets (Medhaug et al., 2017). 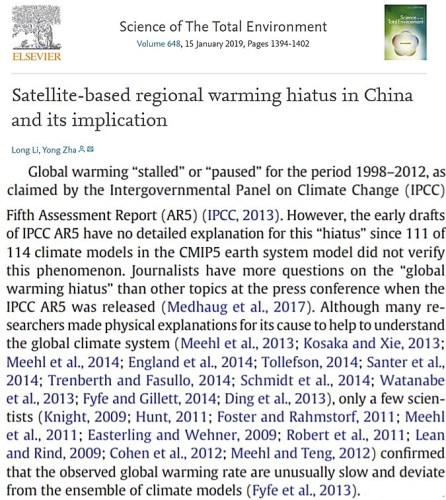 The slowdown in global warming since 1998, often termed the global warming hiatus. Reconciling the “hiatus” is a main focus in the 2013 climate change conference.

Accurately characterizing the spatiotemporal trends in surface air temperature (SAT) is helps to better understand the “hiatus” during the period. This article presents a satellite-based regional warming simulation to diagnose the “hiatus” for 2001–2015 in China.

We conclude that there is a regional warming hiatus, a pause or a slowdown in China, and imply that GHGs-induced warming is suppressed by ONAT [other natural forcing] in the early 21st century. 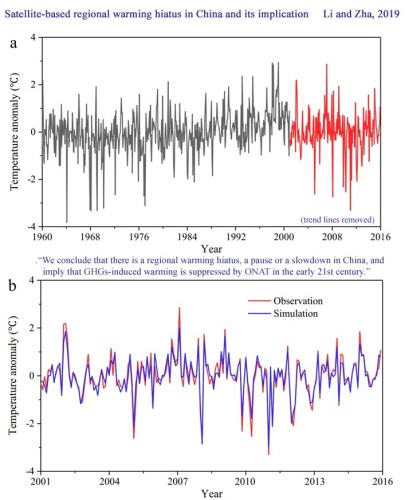 Uncorrupted US Temperature Data Showed Cooling From 1930 To 1999 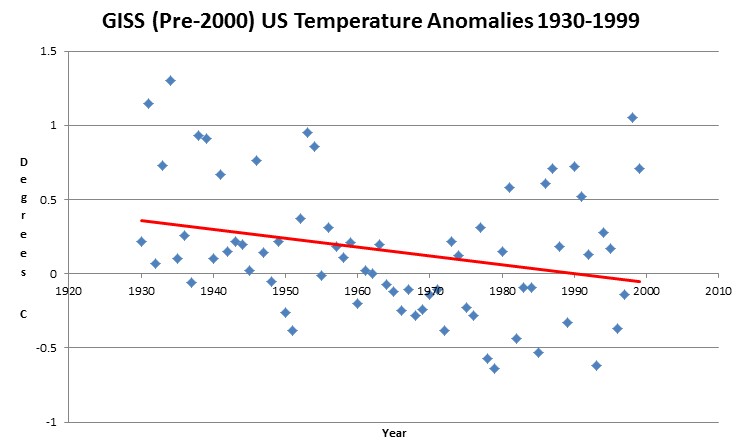 The data was originally on the GISS web site at the URL below, but has since been deleted. I can’t imagine why.

So what about since 1999? Temperatures have also cooled in the 12 years since Hansen corrupted the US temperature record. 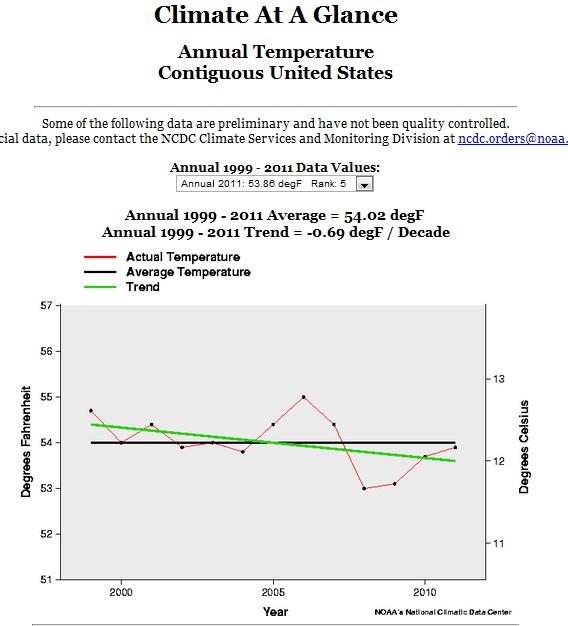 Bottom line is that the US has been cooling for 80 years, and Hansen et al have completely corrupted the data set.

US measured temperature data (blue below) shows that we have been cooling for nearly a century. But the temperatures reported by NCDC (red below) show the opposite, that the US is warming.

The animation below shows the change from the thermometer data, to the fake data which NCDC releases to the public.

They accomplish this transition by an impressive 1.6 degrees of data tampering, which cools the past and warms the present.

And we’re back to; who would counterfeit data if the measurements really did show a problem?